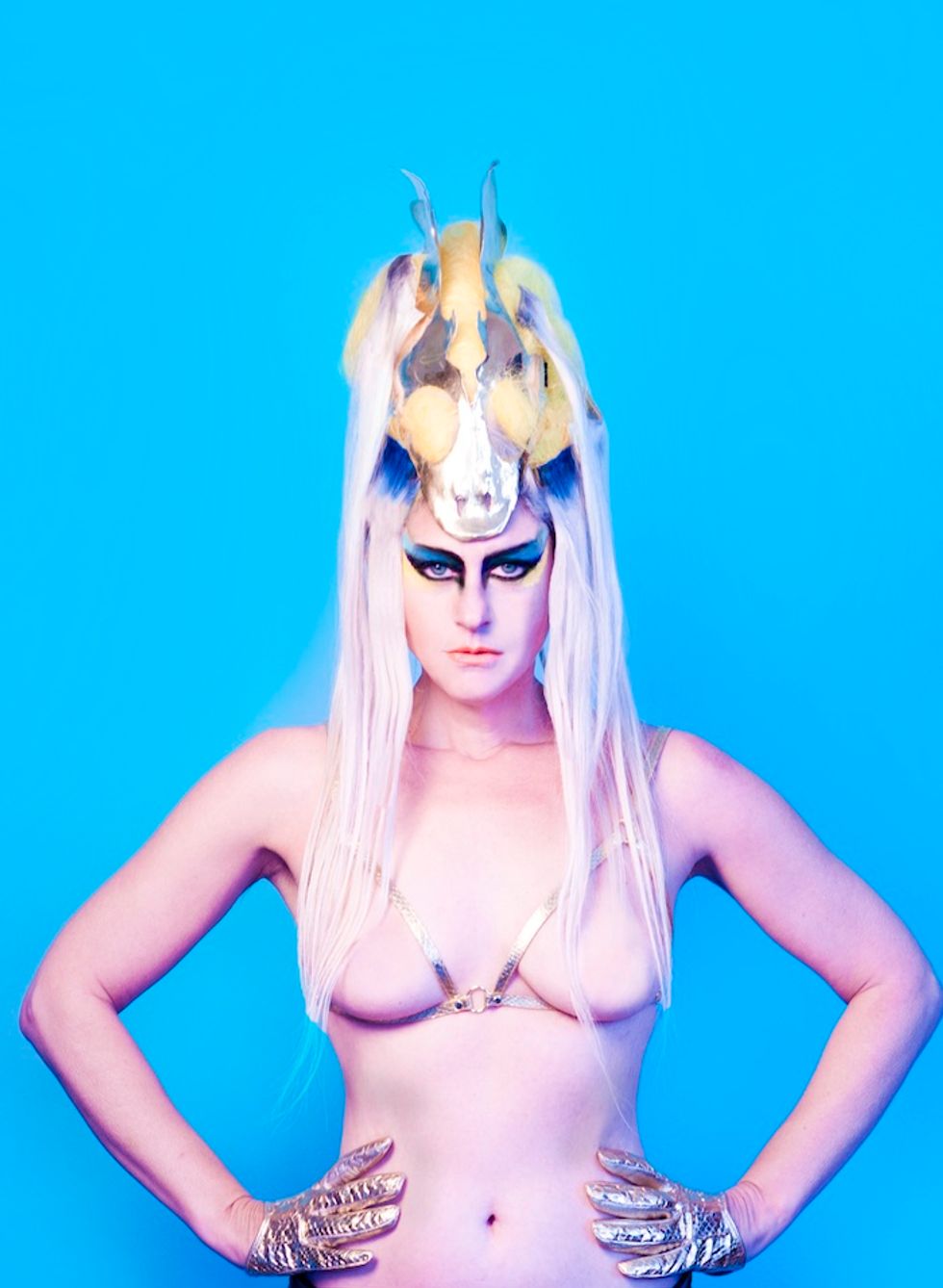 Peaches On Her New Album, Working With Yoko Ono and What Normalcy Looks Like For Her

by Jillian Scheinfeld
PAPERMAG
[Photo by Daria Marchik]
Who loves iconoclastic musician and inimitable performance artist, Peaches? Basically everyone. Especially if everyone includes Yoko Ono, R.E.M front man, Michael Stipe, and actress, Ellen Page -- all of who wrote an essay for her heady photography book, What Else is in the Teaches of Peaches, released in June.

The monograph is a lovely springboard for the release of Rub, her fifth album, following up from 2009's Cream, out tomorrow and featuring collaborations with Kim Gordon and old roommate and longtime bud, Feist. The record, a beat-thumping album full of Peaches' signature self-aware lyrics, has already been teased out with music videos for songs "Light in Places" and "Close up" (which saw Peaches and Kim Gordon playing wrestler and coach, respectively, in a raunchy Lucha Libre-themed clip) and will continue to release conceptual videos for each track.

We recently spoke with Peaches from her home in Berlin to talk about her approach for What Else is in the Teaches of Peaches and Rub and what normalcy looks like for an artist like her.

What Else is in the Teaches of Peaches, your new photography book, captures many "off-duty" moments in the life of Peaches, such as bathing with two women, laying on the couch in a cast, and walking alongside your sister.  What was the impetus to share such intimate, everyday scenes in this book?

It's funny, because Holger [Talkinski,Peaches' tour photographer] approached me a few years ago to take photographs, and he was just a really nice, nonchalant guy. He took really good pictures and never got in the way, and after four years he said, "Maybe we should make a book out of this." At first he made a dummy book -- and of course me being a complete micro-managing control freak, I told him I understood what he was getting at, but I really needed to be involved with the editing process and help craft. So we began to collaborate and understand each other's aesthetics. It took about two years to edit all those pictures! And for me to see myself -- as you say -- during the more banal moments, and not be afraid to just hang out, and "so what ift I don't have make up on?" -- I think that's important, because I always try to be a grounded person off stage and a superhero on stage. It's a constant struggle of me being able to survive, you know?

Completely. Trying to stay humble during the day, but aiming to be larger than life while performing.

Exactly -- so for this book I like that you can see I'm a human and have a duality. A lot of "rock" books have photos onstage and backstage. Well, backstage for me is the same sort of feeling as being onstage, because you're still in that heightened moment; you think you're the queen of the world -- I mean it's your backstage. But maybe on another day I'm just on a ferry ride to another country just like everybody else. And you have to embrace that.

You said that "things sort of just happen to you" and you tend to stumble into things. Are you a believer that what you put out to the universe you receive?

Yes -- that and I try to not "get in" somewhere else or be opportunist in any way. I just want to do my thing and be a part of a community of like-minded people where I can share my ideas. It's very important for me to share ideas and know that I'm part of that world, too, because I don't ever want to feel isolated.

Right. And as an artist you've truly blazed your own path in the face of a built-to-please music industry. How were you able to stay true to your own ideas and craft your image as you please?

The first song off my first album is called "Fuck The Pain Away." If people weren't down with that, they wouldn't get much out of me. I just established early on that I'm the producer, I'm the writer, I'm on my own terms, and I say what I want to say -- are you with me or not? If you're not with me, forget it. So, I went on an independent label. And in the beginning they were sort of just taking a chance because they heard I was "cool," but then things began to shift and it doesn't feel like I should even have a label anymore. Now I can find a way to do it on my own, which is always how I wanted it to be. It's an exciting time for me because I can express myself in videos and not feel like I have to worry about being on a big channel. I can share my music with people online and really make what I want. I'm using my own money towards my videos, and now instead of someone at a label saying "Um, I don't think we can show this on MTV," it's like, no, people want to see this and they can.

For your new album, Rub, and with your other records, do your visions for concept videos come before you write or after?

It's always the music first and then everything comes after that. It's usually during writing that some new conceptual project or a video comes to be. I don't write everyday. Writers always say, "write everyday," and that's fine, but for what I'm doing I prefer not to write everyday so that I'm excited about what I'm doing again. When I start an album I start from scratch. And it's painful and it's exciting. It's all of those things. I don't want to have a pre-conceived notion of what I wrote four years ago or last year, I want to be in the moment. My attitude for this album was post-ageist and post-gender celebration. There's a song called "Mean Something," that says no matter how old, how young, how fit, I mean something. It's about checking privilege, assessing where you're at, and reminding yourself that you matter.

What would you say about being in your 40s surprises you most?

That it doesn't really matter. All that I have is more experience and more confidence, and I'm just excited to continue with whatever happens. I don't feel restricted and I don't feel "oh, I'm too old for this," I just feel excited about learning and about being me.

Lastly, what was it like developing a personal and professional relationship with Yoko Ono?

First of all, I think why John Lennon loved her so much is because she's just such an incredible, influential artist. The more I found out about her the more I couldn't believe how basically all contemporary art is inspired by her, and even how music is influenced by her. She was never afraid to expand. Even at 80 years old, she's still open to experiment and say how she feels or create projects that are politically relevant. I also love how she has these seemingly simple ideas that are so complex once you execute them. When I collaborated with her for the Cut Piece that was the most powerful thing I've ever done on stage, and the first time I was ever totally still and at the mercy of my audience. They became the performers and I watched. There were so many things I would have never realized had I not done that.