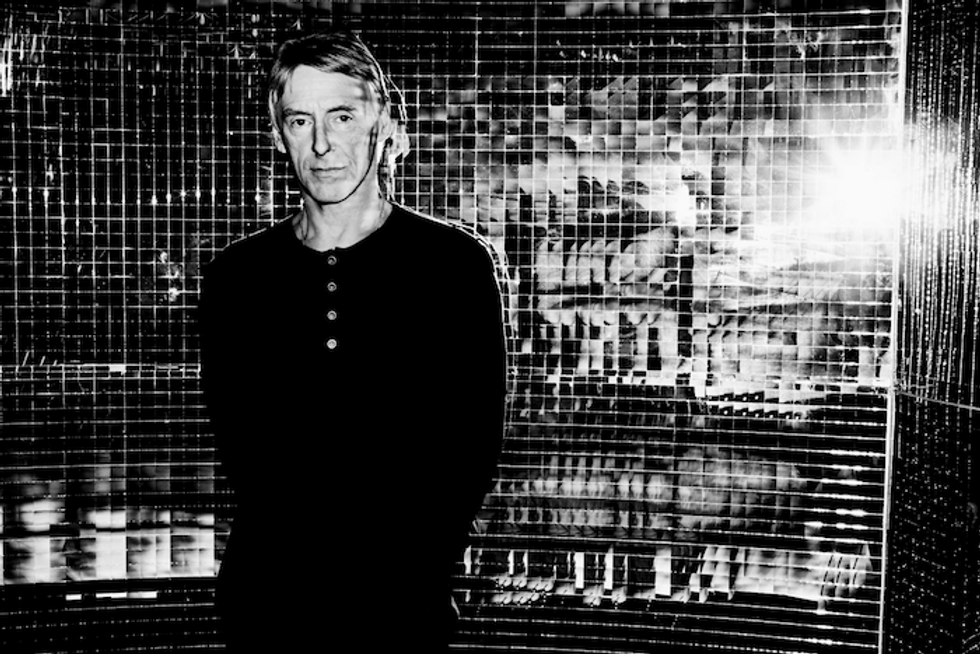 Paul Weller On His New Record, Getting Inspiration from Happiness and Writing the Perfect Song

by Brian Heater
PAPERMAG
[Photo by Julian Broad]
Ahead of the release of Saturn's Pattern, Paul Weller told The Guardian that his twelfth solo record contained a perfect song. The third track, "Going My Way," the former Jam and Style Council frontman told the paper, was only the third perfect song he'd written in his 40 year recording career.

(The others, for those curious about such things, were 1979's "Strange Town" and "Wings of Speed," the final track off his 1995 solo masterpiece, Stanley Road.)

It's a compelling statement from the leader of two of the UK's most beloved bands of the past half-century, who has, arguably, only gotten better with age. It's also a bit of a lie -- or at the very least a stretch for a musician who doesn't mind taking the piss out of the occasional reporter.

The musician stands by the infallibility of "Going My Way," but by the time we sit down to speak at a hotel in midtown Manhattan ahead of his show at Terminal 5, the number of perfect pop masterpieces penned by Weller has ballooned to somewhere around ten. Even still, from the man who gave the world "That's Entertainment" and "Sunflower" and "A Town Called Malice" and "My Ever Changing Moods," that number seems a few dozen shy of accurate.

In an interview about the new record, you mentioned that you had written three perfect songs over the course of your career, and the third is on the new record.

First of all, congratulations on writing a third perfect song.

The good news is that you didn't write all three in 1975. You've really managed to space them out.

Yeah, that would be depressing. I think probably all my life, I've always thought my best song is around the corner, regardless of what I've done and how old I am. A lot of writers have probably said the same thing, that it's still out there.

It's a nice way to look at things.

I think it carries you on a bit, yeah.

At what point did it become clear that this was one of the three.

When there's nothing you would change about it. There's no "I could have done this better." It's all there. It's rare. Sometimes you'll start off recording a track and you'll surpass what you thought you'd get. It goes way beyond what you thought it could have. "Going My Way" was one of those ones -- it sounded good, and all of the sudden it just went somewhere else. And that's pretty rare, to hear a song back and think about what you would change. But I wouldn't change a fucking thing. It's exactly right as it is.

Are you a perfectionist? You put out a new record every few years. It doesn't seem like you're sitting on a lot of music.

No. But don't forget, I come from a time when people used to put out a new record every year. People don't really do that anymore. You can't really do that anymore -- it's really difficult to do that. But when I started out, it was an album every year and probably three or four singles that weren't necessarily on the album. So now the records seem to have quite a lot of space in-between -- two or three years of course is nothing, but for me it seems like quite a lot of time. I find it strange that a lot of new bands make an album every four years or something. When do you have time to perfect your craft or work on the songs if you're only making it every four fucking years.

You've slowed a bit on the touring -- that gives you a little more time to be reflective, work on the writing. Early on, you put out a record and spend a year or two touring on it.

Yeah. I couldn't do that. I get bored if nothing else. Going out and touring on the same record for two or three or four years would drive me crazy. Now we're playing all of the new stuff in the set, which is incredible, but this time next year I won't want to be doing that. I'll be on to something else.

You have no sense of nostalgia at all.

I'm just not a nostalgic person.

You're not nostalgic for your own work, but you have your favorite records.

Of course, yeah. But I'm not particularly nostalgic for whatever it may be. When I think back to nice times, I have memories and they're beautiful things, but they're fleeting. I don't get hung up on them. I'm not that kind of person. I don't think my best years are behind me. These are my best years now. And maybe next year might be shit or it might be fantastic. But for right now, I like it. I wouldn't want to go back to the '80s and '70s. I quite like modern world as it is. I mean, I liked the fact that I didn't have grey hair or wrinkles.

Do you ever miss the struggle of being a new artist?

I don't get nostalgic for it, no. I look back on it in a happy way, but I don't want to go back. If I do look back, my favorite time was when I was with The Jam as a kid and we were just starting to break. We were just starting to make it in London, getting a following together. Getting the band together -- just on the cusp of starting to make it. That was more exciting than when we actually got it. But I prefer everything about today. The person I am. I've got a great appreciation of everything. I was too ignorant or arrogant to really appreciate what was going on [at the time].

You've got a family, you've got kids, you're content. Is it harder to find inspiration?

There's always something to write about. I'm not one of those people who think that an artist's best work comes when they're in the depths of despair. Great things have come out of that, as we know, but it's not foolproof. Great things have come out of contentment and happiness, as well. I'm sure those things in my personal life have a bearing on what I do, but when I think about my own music, I think beyond personal feelings. I'm looking at something else. I'm looking to find something else.

When you look back at certain records, is there a clear, tangible connection between the music and where you were at that point in your life?

There is sometimes, yeah. Not always, but sometimes. There are a few songs I've done that have been autobiographical, but then I get bored and have to take it somewhere else. Broaden it out a bit.

You actually get bored with the song during the writing process?

Yeah, sometimes. There are so many songs that are about someone's feelings. How depressed they are. And it just fucking drives me nuts. It bores the shit out of me. I'm not really interested. I've got my own shit to deal with. My writing's not always a reflection of where I am.

You don't look at it as catharsis?

Sometimes, yeah. Each song is different. But I don't lead an interesting enough life to write about myself all of the time.

Saturns Pattern is out now.
You May Also Like
Music