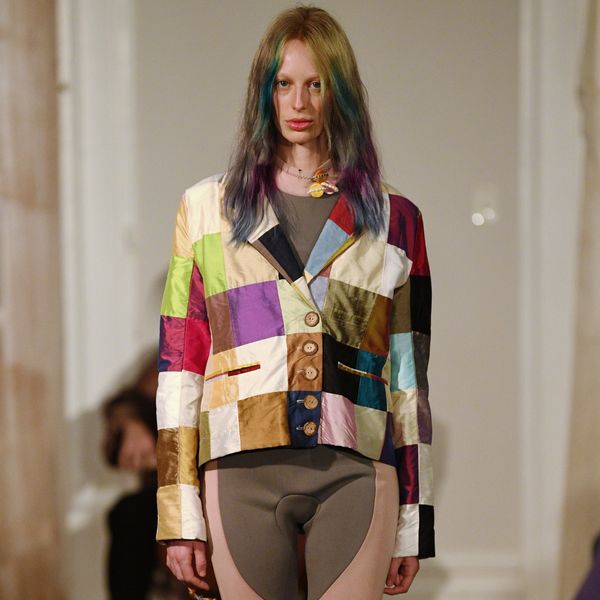 When designer Emily Adams Bode (now shortlisted for the LVMH prize for her eponymous, treasured menswear line) first started gaining recognition, her press went along with a certain narrative. Bode, a collector of antique textiles and rescuer of yellowed heirlooms, became famous — among the GQ set, at least — for her quilted jackets, which are made of actual vintage quilts.

In interviews, Bode praised quilters for their craft, assuring the quilting community (which is an actual online thing) that she respected their work, that she was judicious in picking the sorts of aged quilts that were suited towards alteration, that she wasn't stepping on anyone's toes. And while this season quilts took something of a backseat to other precious textiles — there was a jacket with a grid made of pennies! — Bode's previous work sparked a trend. Patchwork is everywhere. Everywhere!

Related | Bode's Dedication to the Life of Todd Allen

Patchwork has taken on a life of its own, showing up everywhere from downtown DIY venues to the most polished of catwalks. Artist and newly minted designer Carly Mark opened the debut show for her line, Puppets and Puppets, with model Jane Moseley in sheeny patchwork pants, a matching jacket mixed in a separate look on Lili Sumner. Gypsy Sport's Rio Uribe showed houndstooth patchwork pants, and Eckhaus Latta revels in the style. A huge portion of the Asai collection was patchwork, and Ashley Williams showed it on fleeces and jackets. And Alessandro Michele at Gucci always loves a patchwork moment.

Clowns have dominated runways since this season's couture shows. The whole thing is an obvious response to Donald Trump's sinister buffoonery, and they're sort of purposefully depressing, frightening, and boring in equal measure. And maybe this is a reach, but I see the desire for patchwork as speaking to the same wolf at the door, in a subtle, more positive way. Things are scary, and so we want something homespun and soothing. Patchwork and other craft fair-esque touches honor the artisans that make our clothing, and are a distinctly American nod to a legacy of heritage and craft.

There is a solid third season episode of Sex and the City dedicated to intrepid heroine Carrie Bradshaw's insecurities regarding her ex-boyfriend, the slimy-sexy financial tycoon Mr. Big, and his 25-year-old wife, Natasha. Natasha, the titular 5'10 glamazon, is sleek and seemingly perfect, and Carrie, a curly-haired K-K-Katie (your girl is lovely, Hubbell) feels cheap and small. She spends 20 minutes of airtime plotting how to impress Natasha, who held a pre-marriage position at Ralph Lauren and hosted her wedding at a Hamptons estate.

Throughout much of the episode, Carrie is itchy and insecure. But in one scene where she actually feels comfortable, she meets best friend and former fake lesbian Charlotte for dessert and an evaluation of an outfit she has spent all of her rent money on in order to make Natasha jealous. But Carrie is already wearing the perfect outfit: a patchwork suede coat from Illia with matching Manolo Blahniks, fresh from the orange box.

As a tween, this outfit, rather than any of Natasha's silky separates, stood out to me as a paragon of she-has-it-together womanhood. And throughout fashion month, I have not stopped thinking about it (also apologies to my editor for constantly writing about Sex and the City, I am a cliché!). Sex and the City comparisons are equivalent to The Matrix in terms of basic and annoying overuse, but they're both referenced to death for a reason: they are profoundly stylish, profoundly influential. And memories of that particular outfit — from the year 2000, a few short episodes ahead of both 9/11 and Carrie's marriage and teeth-ruining affair with Mr. Big — have popped up across countless collections.

Later, when Carrie tries to apologize to Natasha for having an affair with her husband, she wears a patched-together style of another, much more iconic kind: the John Galliano newspaper print cowl neck slip dress. Demna Gvasalia would later appropriate a similar print for Balenciaga spring 2018, referencing the onslaught of fake headlines and obsession with "fake news." Both Gvasalia and Bradshaw's takes on newspaper print were meant for discomfiting, tragicomic, nearly hopeless moments. But patchwork is warm and cozy, homelike. And this season, that's what everybody seems to need.