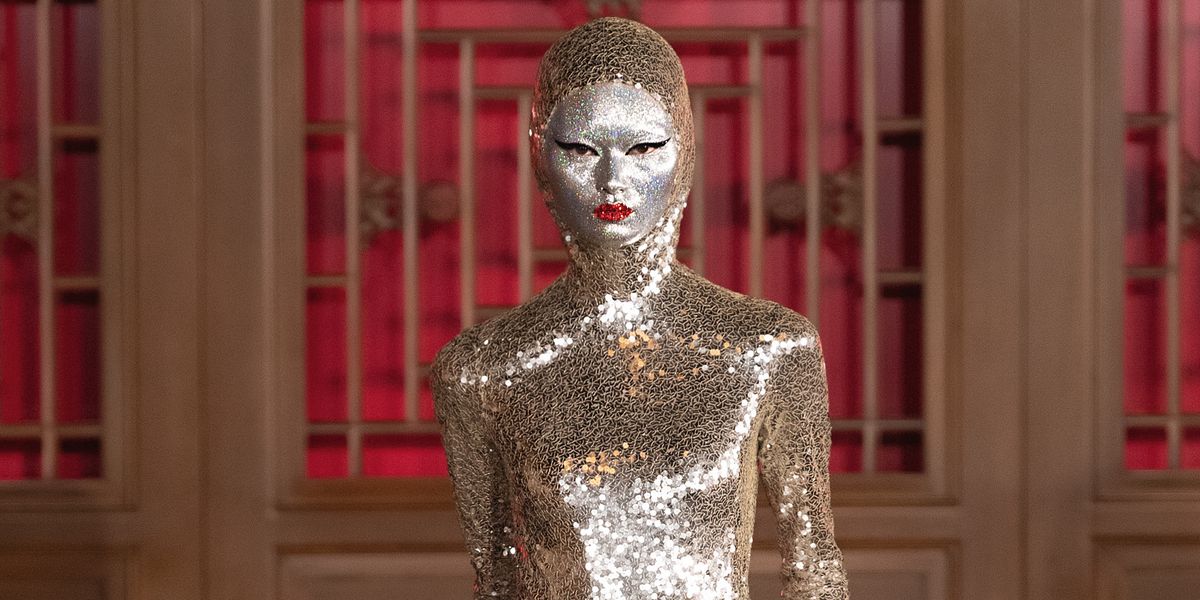 No one does a face covered in glitter like beauty legend and makeup artist, Pat McGrath. And for the recent Valentino Couture show in Beijing, Mcgrath took it to another level. Doused in literal head-to-toe shine, models emerged on the runway in a full face of shimmery silver paint along with a bold red lip.

For the glamorous look, McGrath was reportedly inspired by "silver screen sirens." The process of creating it, however, was surprisingly simple. Starting with a layer of Metamorphosis 005 Kit in silver from her own line, McGrath followed it with the Perma Precision Liquid Eyeliner in black, and then finished with the MatteTrance Lipstick line in Elson.

For the show, titled "Daydream," Creative Director Pierpaolo Piccioli also shared the artist's vision in creating the dramatic look and matched it with a series of giant ball gowns, sheath dresses, exaggerated rose prints and bows.

"That's great to get the brand alive and to face reality, but I also like the idea of the extravagance and boldness and uniqueness of the couture," Piccioli told Vogue. "Today, Valentino is streetwear and couture, and the two work together to create a new way of being."

Although over the years, glitter and sparkles have become something of a signature element in McGrath's work, the seasoned artist has been playing with the look more frequently lately.

At Marc Jacobs' 2020 presentation at NYFW, for instance, McGrath had models sporting exaggerated lashes, loose glitter, and bedazzled eyes with rhinestones and gold leaf. "When you think about a lot of makeup, you always think that's quite old-fashioned," McGrath told PAPER backstage at the show.

She continued, "What's great is taking looks that come from the past, but modernizing them. So, that was another great quest we all went on as a team. In a way, I would call it a modern take on street style. It's street style in the most maximal way. It's been really a lot of fun for myself and the team to be able to express ourselves in all of these different ways. No one girl, or boy, or person, could look the same. Every single one had to be different. That was quite an exercise, as you can imagine."