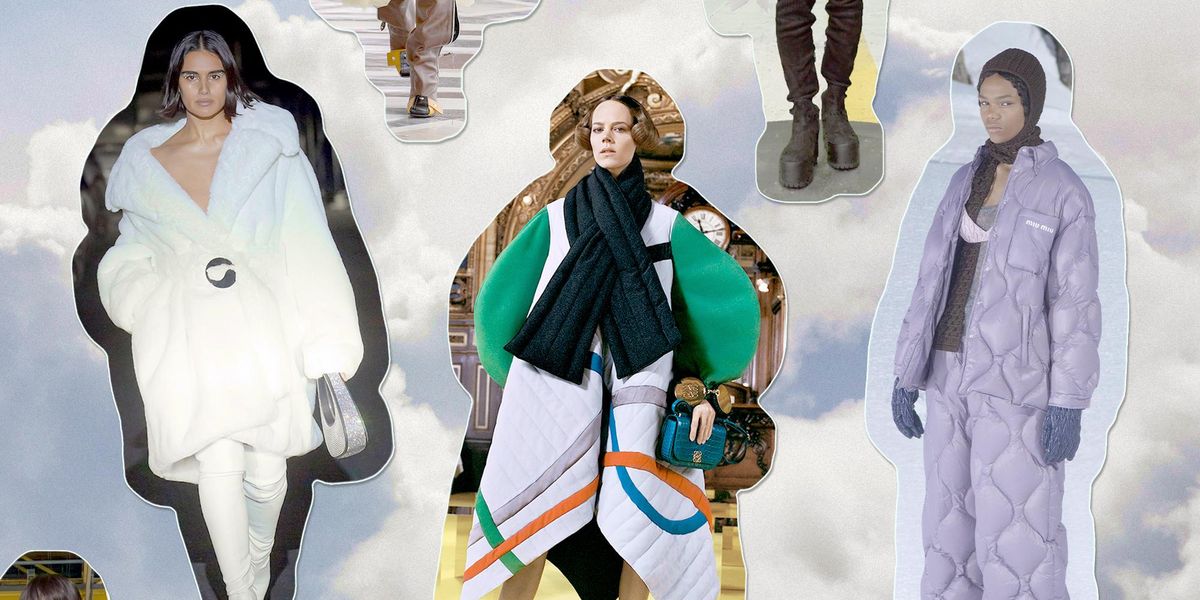 Was This the Last Digital-Only Fashion Month as We Know It?

Paris Fashion Week may have been mostly virtual again this season, but the schedule was still as jam-packed as ever with over 90 brands on the official lineup. The shows stretched over 8 days starting with Marine Serre and ending with Louis Vuitton in what was could very well have been the last digital-only season. With vaccine distribution expected to reach most people by the summer, live in-person fashion shows have a shot at returning once Fashion Month kicks off again in September. Regardless, the short films and digital shows that took place in Paris were some of the most creative and memorable of the season. Below, we rounded up some of the highlights.

Nicolas Ghesquiere's penchant for time-travel exploration via clothes sees him look to the Age of Enlightenment this season, as well as the aesthetics of Greco-Roman antiquity. The collection, which he showed via a pre-recorded film shot in the Louvre with music by Daft Punk (pre-breakup), incorporated statue drawings by the Italian artist Fornasetti and centered on a main silhouette: enveloping, cocoon sleeves on top and frilly skirts on the bottom. Look out this Fall for the slouchy leather boots with wedged heel, a nod to the footwear from his Balenciaga days but updated for the future when we can finally travel again. SEE COLLECTION FILM HERE

Staged at the Palace of Versailles at night, Dior's film conjured a mythical fairytale with spooky undertones and some very enchanting dresses. References to classics like The Little Red Riding Hood (see look number 33) and Cinderella (models running against the clock on an elegant staircase) are seen throughout in a collection that spans from daywear and denim to suiting and gowns. SEE COLLECTION FILM HERE

Dressing for the slopes seems to be on everyone's mind this season (see: Thom Browne's winter wonderland film and Lady Gaga's vintage ski-chic photo with Adam Driver), and Miuccia Prada is no exception. The designer, who spent much of her youth in the mountains, staged her Miu Miu show in the Cortina d'Ampezzo in the Dolomite Alps. Between the pastel puffers, giant furry boots and balaclavas, this was a collection primed for snowy adventures and extreme outdoor expeditions. SEE COLLECTION FILM HERE

In what was perhaps the most entertaining fashion film of the season, Lanvin shot their collection in a grand Parisian hotel complete with shopping bags, debauchery and champagne set to Gwen Stefani's "Rich Girl" with a cameo by Eve herself. The throwback, feel-good energy of the film captured the party-ready mood of the collection, which was filled with glorious silk satins and taffetas, animal-print faux furs and Roaring Twenties-esque feathers. SEE COLLECTION FILM HERE

For Gabriela Hearst's first Chloé collection, the designer played with several of the brand's signatures — ponchos, scallops, broderie anglais — and gave it a grounded and utilitarian twist. (The capes, for example, had a built-in puffer collars.) Her signature fringing and elongated silhouettes were combined with sustainable elements like patchwork outerwear made from deadstock fabrics from past collections. The collection was filmed in Paris' Left Bank as a tribute to the brand's founder Gaby Aghion who was born 100 years ago. SEE COLLECTION FILM HERE

The prospect of traveling around the world again after a year of domestic lockdowns has proved to be a tantalizing theme this season, and Balmain is no exception. Olivier Rousteing made it abundantly clear how he envisions his jet-set lifestyle once things open up again: statement travel luggage, bold monograms, army green boiler suits and flashy outerwear — airport dressing will take on a new meaning in the near future. SEE COLLECTION FILM HERE

After a pair of polarizing collections shown via lookbook format, Fall 2021 marks new creative director Matthew M. Williams' first runway show, albeit one held with no audience. The models stomped down a dark set with puddles of water at their feet, showing off Williams' subversive take on glamour including some extreme footwear and very sheer embellished dresses. "In many ways, this collection is about a constant tension between two worlds," he said. "It's about finding personal meaning in difficult circumstances; it's about sincerity in what we do rather than strategy. We wanted to bring a sense of lived reality alongside precision, elegance and extravagance in the clothing and looks." SEE COLLECTION FILM HERE

Loewe under Jonathan Anderson has always veered toward the off-kilter and intellectual, but this season's unapologetic use of color and graphics takes it to new territory even for Anderson. The curvy lines and slouchy shapes exude both softness and avant-garde at once, signaling a new post-lockdown way of dressing where we'll all want to embrace the fun of fashion again without quite losing the sense of comfort we've all gravitated towards the past year. SEE COLLECTION FILM HERE

As one of the few brands to stage a live runway show with guests last fall in Paris, Coperni once again favored the physical format this season but with even bigger ambitions. The brand, led by Sébastian and Arnaud, invited 70 guests to a drive-in-style fashion show at the Accord Arena (Beyonce's concerts are held there) where 35 electric cars assembled in diagonal format, whose headlights lit up the runway. Guests inside the cars watched from their windows as models paraded down in minimal, sporty styles with sleek accessories and sharp silhouettes. It's about the closest thing any fashion insider has had to IRL fashion shows again. SEE COLLECTION FILM HERE

Arianne Phillips, the Oscar-nominated costume designer best known for her work with Madonna, is not usually involved with fashion shows and collections. But the legendary creative has already made a few exceptions for Henri Levy, the designer and founder of Enfants Riches Déprimés, who started collaborating with her a little over a year ago. She also styled his Fall 2021 collection, titled Xeropittura, which was shown via short film and stars Zoe Bleu Arquette and Dylan Saje Mckay. There's also an introduction by Courtney Love, who actually introduced Phillips and Levy and is a big fan of ERD (she memorably attended their last fashion show in Paris pre-lockdown). SEE COLLECTION FILM HERE