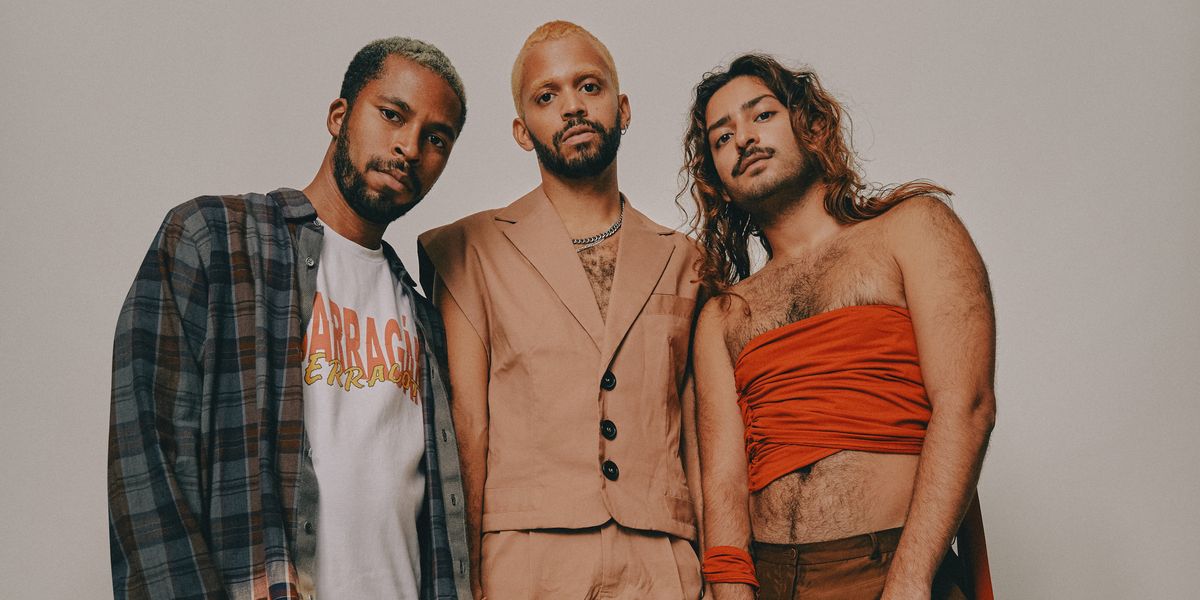 Papi Juice on the Relief of Queer Nightlife

Papi Juice, the roaming NYC-based nightlife event, has become more than just a party over the past seven years; it's an institution. The way that organizers Oscar Nunez, Adam Rhodes and Mohammed Fayez have curated not only the events' spaces, but the affiliated brand, have left an impact that's undeniable — so undeniable that the likes of Frank Ocean and museums like The Brooklyn Museum, MoMA and the Metropolitan Museum of Art have all partnered with the collective. It's not just because of their ability to curate a guest list or DJ lineup, but also because of the intentionality behind it all.

Later today, the collective will take that work virtual as a part of HBO's Pride festivities hosted on the Human By Orientation site. Beginning at 7 PM EST (4 PM PST), they will spin beats on the site getting fans ready for the upcoming socially distanced Pride weekend. The Detroit-based performer Rimarkable will also be featured.

"She's so talented and is also doing such great things for the Black queer community here in Brooklyn and in Detroit as well," Nunez tells PAPER. "What's nice about this event is it is a cute opportunity for people to kick off their Pride schedule and we can just get them warmed up, with our vibes and with our music, I feel like people will be excited and ready to have a very proud weekend even if it's from their homes."

Ahead of the event, and their seventh anniversary "Girl You Have Done It Again"-themed party featuring Venus X, Kelsey Lu and more over Zoom, PAPER talked to the founders about how things got started, the intention behind the party and the cathartic need for gathering. Though Fayez couldn't make it to the interview, he has played a large part in shaping the visual identity of the brand, putting just as much energy into fliers as any other aspect of the collective's operations.

For those who don't know, what's the condensed version of how you guys started Papi Juice.

Adam Rhodes: Oscar and I met on Tumblr maybe around 2012. We had mutual friends and we happened to live in the same neighborhood, we later found out as we were going to the same spots for drinks and whatnot.

We eventually became friends later on in our relationship. Oscar came to me and was like, "Adam, we should start a party," during one of our days just gallery hopping in Chelsea. I said, "Absolutely, yeah. We should start a party together." We knew a bar manager at one of our local spots in Bedstuy, Brooklyn. He offered us the spot coming up that week, which happened to be their Pride weekend. That was seven years ago.

That initial party was very small. We made a little flyer, we passed it on to our friends on social media. The bar couldn't have been much bigger than anyone's studio apartment a couple city apartments put together, but somehow they invited us back and we became a monthly there.

At that time was it just a party or was it a very intentional space?

Oscar Nunez: We started off with an intention. I think Adam and I bonded a lot about some of our hopes and dreams for a nightlife space. We were getting that definitely from existing events that were happening around the city, but we were just like, "Oh, it would be fun to do something. We're both Central American and we both lived in Bedstuy. We had this connection to this little bar and this is New York. There's always an opportunity for a lot of things to happen." So we were like, "It would be fun to do something."

From the beginning, we had this mission to celebrate queer and trans people of color and that was something we kept at our core. There was always this value to it. I think it was at our third event that was the day of the verdict in the Trayvon Martin case. I remember it was a very sad and frustrating time for a lot of people in our community. It was that point for me where I was like, "Wow, this is so much bigger than just the parties."

This was a space where queer people could gather intentionally in this way with others that are like-minded and being able to throw some ass, but also discuss and commiserate about our frustrations with the current social events that were occurring. So that party for me was a moment where I was just like, "Oh shit," this is important. These spaces in nightlife are so important, and it's more than just a dance party.

"From the beginning, we had this mission to celebrate queer and trans people of color and that was something we kept at our core." —Oscar Nunez

I feel like within Black communities and community of color specifically, there is this tradition of celebration within grief.

Oscar: I agree. It's interesting because it also happened within queer history. There's this idea of death in the queer experience that is also similar to what you were explaining about Black folks, like death and celebration. Given the HIV AIDS crisis, I felt like there was a lot of that overlap to the queer community.

You use the word, "practice," and you call yourself an "art collective." I'm wondering about the intentionality behind those words.

Twice a year, we'll have a retreat day where we talk about goals and our favorite events. We talk about where we potentially had not the best experience, how we can support each other and how we can push each other to grow. So we're really intentional in the way we work where we're trying to work together and not necessarily individually.

COVID-19 has everyone on lockdown right now. What are we missing out in terms of what your plans were for your seven year anniversary?

Oscar: For our seven year anniversary, we had an idea of what we were going to do. It was probably going to be similar to what we did last year for World Pride. But maybe this time we were hoping it would be a little bit bigger where we would have food, a special sunset performance and DJ set, and then drinks for a few folks that decided that's the ticket they wanted to attend.

Last year, we had over 17 artists in one night, performers and DJ, and they were all queer and trans people of color. When we're doing this, we ask folks that we're booking, "Do you identify as a queer or trans person of color?" That's obviously very important to us and sets this bar of mutual respect.

Collaboration has long been a part of Papi Juice. Is that just a part of the idea of it being a collective? You work with a lot of the same people.

Adam: Yeah. The collaborations we choose and the collaborators we choose, people we invite, we always think about them or we look at the history of their work to try to see if it feels right, to try to see if we're meeting each other halfway with our intentions. If they're on the same path, then it makes total sense for us to collaborate. There are a couple of other collectives in nightlife that we work with often and it's because we have the same vision.

For you, what does nightlife provide to people or communities?

Adam: Earlier, Oscar was talking about the party the same night the Trayvon Martin verdict came out and we all felt the heaviness of it, even amongst the celebration aspect of the party. I was thinking about that and the fact that Mohammed did a poster for the Black Trans Liberation march about two weeks ago. To bridge those two things, I was thinking about the importance of holding spaces as queer people. At the march, it was so nice to be in the same space with queer Black people I haven't seen in so long.

Even in the mourning aspect of the event, it was still a huge celebratory aspect, sharing physical space and seeing faces I haven't seen in so long. Nightlife offers a similar kind of relief where I'm seeing myself or I'm seeing members of my community. I'm seeing people who understand my experience on a day to day. I'm seeing those faces.

Even during COVID, it's still great to see those faces on Zoom. It's definitely hard not being in the same room, but seeing those faces in nightlife, in lots of forms, offers a relief to people, at least to me.

"Nightlife offers a similar kind of relief where I'm seeing myself or I'm seeing members of my community. I'm seeing people who understand my experience on a day to day." —Adam Rhodes

Oscar: Especially for us queer and trans people of color, it's harder for us to find spaces where we're a majority, you know?

So I think there's a lot of power in the fact that this can happen in nightlife where the majority of the people that will come through those doors are queer or trans people of color. That's something that can make you feel very powerful to be surrounded by all of these folks that share at least one part of your experience with you.

I also feel — maybe because I'm a libra and I love romance — the part of being intimate in an environment where it can feel safer, I think is something that is really nice to me. When I was a teenager and dealing with my sexual identity, I would always think what it would be like to dance, like bachata or grind on a man. So this idea of being intimate on the dance floor in a very open way without fear of violence, is something that is also very empowering and liberating for a lot of us that don't necessarily experience that every time we go out.