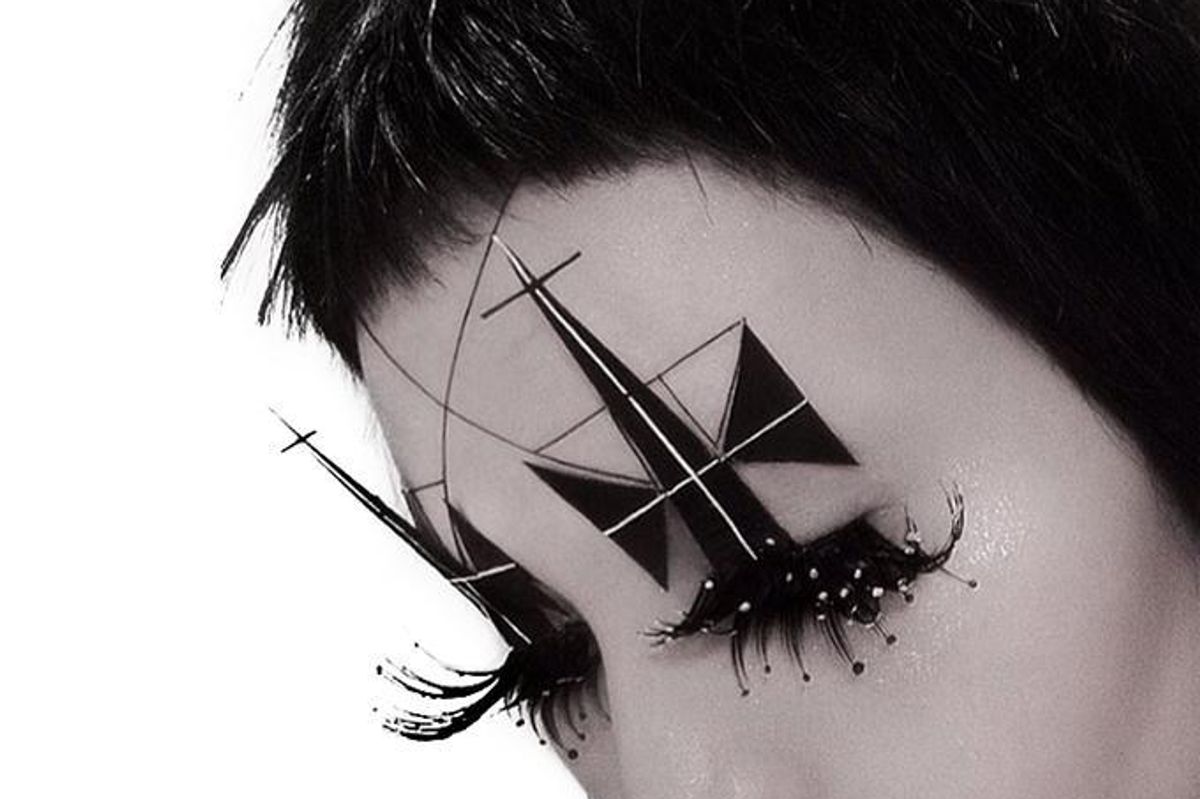 Hailing from a corner of Instagram geared toward dark, goth-leaning fashion and beauty looks, @teratology, aka 20-year-old Arizonan Maren Bailey, stands out as one of the heaviest hitters. Her eye-catching, handcrafted 3D make-up looks made from paper, tape and string are a popular Discover page feature, followed and liked by 48.3K users. PAPER caught up with the crafty creator about what inspired her to make papercraft makeup, whether she'll ever take her creations into technicolor, and her effort to launch her own business via a "PAPERIZE" Kickstarter project.

Do you have a background in arts?

I suppose I am probably an odd duck compared to most. I tend to derive a lot of my ideas from the so called "strange and unusual". I come from a family of artists, so growing up I was continuously surrounded by art and innovative ways of thinking.

What was your first experience with 3D make up?

I've never been one to shy away from going past the norm when it comes to my art, so I was quite ambitious the first time I made 3D makeup. In fact, I was so eager to remodel societal standards that I decided to construct a completely unconventional makeup look using only paper, tape, and thread. I am actually pretty pleased with myself for filming that look in particular, because it proves that what I do is authentic, while also [demonstrating what the designs look like on a] face or body while it is in motion.

I got bored with seeing the artistry of makeup in everyday life going only as far as a 2D medium, so I made it my prerogative to [reorient this] by presenting myself to the public while wearing one of my readymade paper designs.

All of the pieces I make are meant to be worn and applied as any pair of false lashes would be -- with lash glue and/or tweezers. As a creator of 3D makeup, it's critical that I always keep in mind any concerns in regards to the longevity, comfort, and potential threats [like rain or snow] to the size, shape, and finish of a design. It is also important that I ensure that every piece can be re-worn, reshaped and adjusted to fit various eye and face shapes.

How did your PAPERIZE project start exactly?

PAPERIZE started when I ran out of liquid liner. I wanted to do graphic liner that night, but I didn't have all of my usual supplies. That's when I saw an unused pad of black drawing paper under my easel, which was sitting next to numerous rolls of tape, and sewing thread. About three or so months prior to this, I had done several makeup looks where I made 5 inch paper lashes and brows but it never occurred to me to do the same for an entire makeup design until that very moment.

What's your goal with PAPERIZE? How do you think it will change make up artistry?


The main objective for the PAPERIZE project is to revamp the societal standards of everyday makeup. In a way I wanted to enhance the conventional products that we are too familiar with and replace them with something that would give the same illusion, yet provide more options and maintain its integrity.

I believe that this project has already changed the artistry of the makeup community. I've noticed that many people have started to branch out from using their conventional items and instead have begun to substitute them with paper or other materials. Whether it's by replacing a pair of their favorite false lashes with a pair of hand cut paper ones or creating an entire design that covers their face, it appears people have started becoming less concerned about what they can or can't include as part of their makeup routine.

Walk me through the production process -- are they all handmade or are you trying to streamline production eventually?

Yes, every design is 100% handmade and original. I buy all my supplies, photograph, film, dress, design, edit, hand-make and apply my own makeup -- the production process is quite lengthy. Depending on the design or look I'm trying to convey in my images or videos, the process itself can take anywhere from three hours to three days.

For every paper look, I will generally spend the entire morning and afternoon sketching out a design and then spend the rest of that evening until early the next morning hand-making and painting it. When it comes time for the actual makeup application, photographing, and filming, I will generally lock myself in my room at 5 pm and won't come out until 5 am. Once I have that documentation, I would say it's another 5 or 6 hours just going through photos and video clips and picking which ones I want to edit and post.

I hope that someday I will be able to produce my designs at a quicker pace so that I can start to earn a living from this while continuing to put out new content. After all, the amount of time, money, and dedication that I already put into my work is comparable to having a full time job.

Are you thinking of adding other colors, materials, textures and or shapes in the future?

I actually have been trying to figure out how to work with other materials from the very beginning, but so far I haven't gotten the desired effects that I'm looking for. However, I am up for the challenge.

Although I've considered creating colored designs for future looks on myself, I've found that the white and black remain the best to film and photograph. Also, because I felt my monochromatic paper designs remained true to my character, vision and aesthetic. So you probably won't see me wearing too many colored paper designs.

That said, should this project take off, you can most definitely count on me producing a wide range of colors, finishes, mediums, and sizes so that there will be something for everyone.

What else is in store for the brand?

I'm hoping to start selling other paper creations of mine, such as the lashes and brows, along with other designs that can be worn anywhere else on the body.