Artist Toyin Ojih Odutola's work can be found in some of New York's most prestigious museums — from the Met to MoMA. Her portraits are frequently characterized by intricate mark-making. She likes to go beyond what a figure looks like, showing a viewer who they are, as she explores representation and identity. One layer of Toyin's perspective is informed by being born in Nigeria and educated in Alabama and California. That's one layer of many. "My art takes work," she once said. She has current and upcoming exhibitions in DC, New York, Schenectady, and Seattle — lots of opportunity to get to work. — Khalid El Khatib 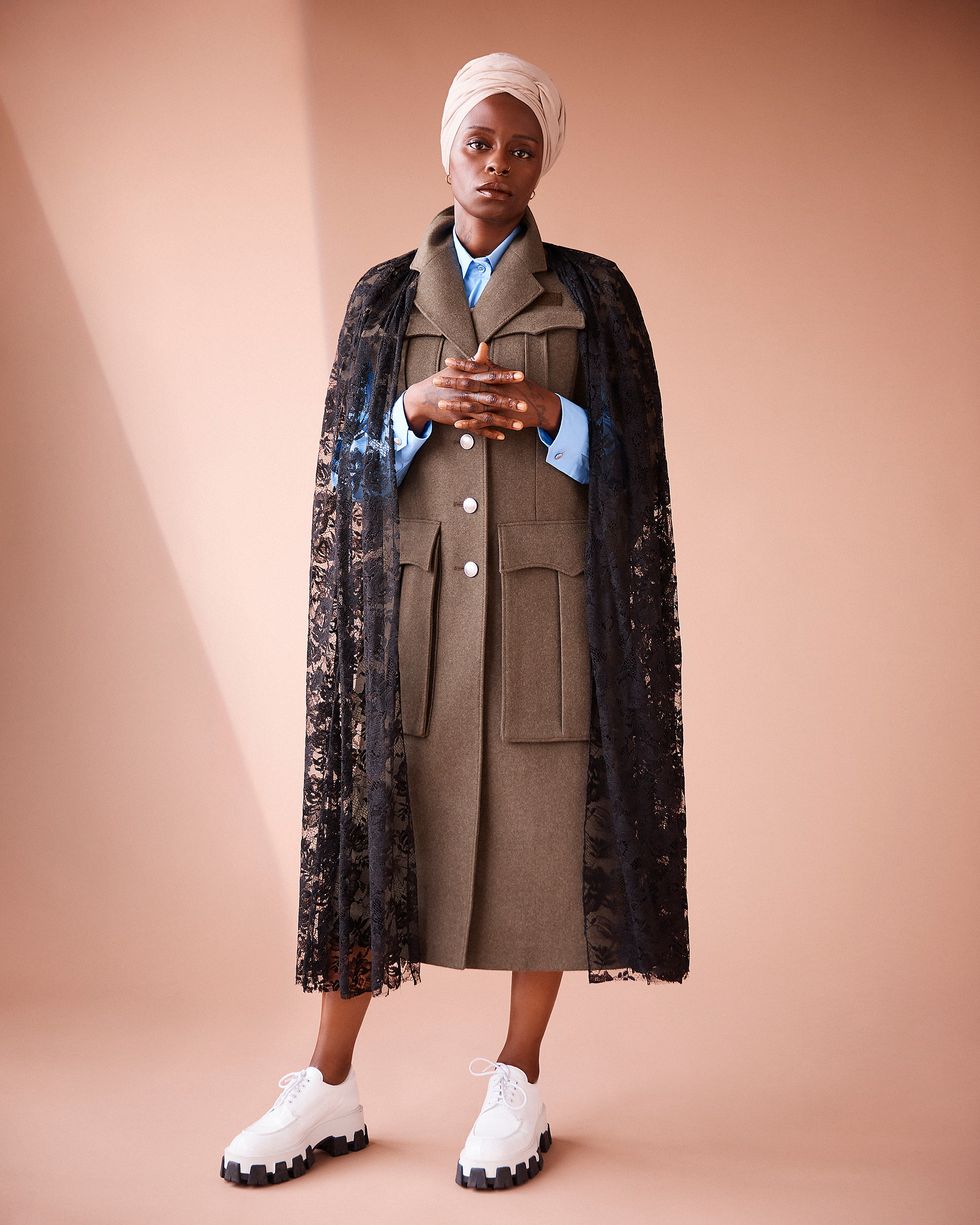 All Clothing and Accessories: Prada

That I'm only interested in the genre of representational, figurative portraiture — on its own — instead of the more formalist and/or psychological making which constructs a picture. Visibility isn't enough, I'm interested in what it can do: thought experiments for how you can manipulate an image to express certain visual forms, how that reads or translates ideas about what we feel and believe in, and how it can be utilized and transformed. What visibility confronts, contends with, and contradicts in established codes and standards — particularly those which seem tacitly and subtlety applied — is what I mess with it. The genre itself isn't as limiting as some might imagine; I see it as an amalgam.

Really any evening where I'm with close friends in a cozy setting, discussing a variety of topics, letting the conversation meander for hours.

This gets misread often, but…that I'm Nigerian — it gets in the way. I mean this not as some fallacy about how identity doesn't affect daily existence, which, of course, it does. I'm incredibly proud of my heritage, yet when that is all you are seeing of me, I, in turn, become this flattened, finite conception in peoples' minds. I cannot be anything but Nigerian, and that is at the mercy of whatever "Nigerian" means to others, especially when there is so little known in the US about Nigeria and other African countries, in general. The power I claim in that fact holds true and I do not deny it, so this isn't about choice of labels and the power one has in owning and expressing one's definition as well. It's about having to consistently express that identity to others, to forcibly announce it — whether one chooses to or not — when you really just want to get on with what you are doing, what you are trying to create. If I could claim it for what it is and not have it be used as an excuse for someone else's lack of imagination, or an emphasis on exoticism and fetishism, or to constantly have to explain my reason for being included — for "being in the room," so to speak — that would be incredibly freeing. However, what tends to happen when people see or know my heritage is that they can't seem to engage with what that can be, how it can inspire and become a catalyst for so many other explorations.

Fantasized about being an ethnographer when I was younger...maybe, that's what I'm doing in a very roundabout way now? Or, I'm still fantasizing.

I got braces and four teeth extracted. It's been an intensely painful healing process, but raggedy, overcrowding teeth are real and I finally saved enough to get it done.

Not stressful, but it can get exhausting: that my surname is actually "Ojih Odutola," not "Odutola"; no hyphen, just two names which are very important to me and hold equal weight. Not acknowledging, respecting, or straight up omitting this fact sometimes feels personal.

I don't think it's irrational...the end of our earth as we know it due to climate change, growing man-made intervention and carbon emissions?

Seeing and reading reports from the internment camps at the borders of Mexico, Arizona and Texas of families being separated and held against their rights. This inhumane treatment of people has to stop. There are no grounds for this kind of action and, historically, we know this to be true. The fact that this is happening in 2019 is beyond appalling and feels like an intentional means of dehumanizing all of us, societally — especially so once you realize most of the problems these camps seems to be addressing were created by US interventionism in Central and South America. To punish people for wanting to be safe and live fulfilled, thriving lives away from the things we helped instigate and establish is a nefarious kind of cruel irony.

People seem to be moving away from bombast and the extreme as a means of communicating — not just in the media and press, but in dialogues amongst ourselves. I sense that we crave more nuance now, less blanket, unfounded proclamations? I realize I live in the bubble that is New York, so I understand if I'm speaking from a situational viewpoint; however, it's refreshing and inspiring to see diverse groups of people more engaged in understanding different perspectives and applying them to their own preconceived notions, their own truths and experiences. The divisions that have been felt since 2016 are still here, but what seemed to come from a place where everyone was so set in their own prerogatives, their distinct proclivities, even their propensity or loyalty towards a specific side or group is now being analyzed more openly.

I think we are now becoming aware that one can stand firmly in their position and beliefs yet still have it be challenged in a way that is educational, respectful, and helps build one up and expand one's thinking. I truly believe in the phrase, "I want to be proven wrong,"—not out of some pretentiousness, but because I believe a person can learn more about oneself by thinking critically and persistently so on one's position. It's not an attack to be challenged in such a way, it's about solidifying the "why" at the core of who you are and what you do, which is a process and isn't determinate. It's really exciting to witness people engaging with this more and more amongst themselves right now.