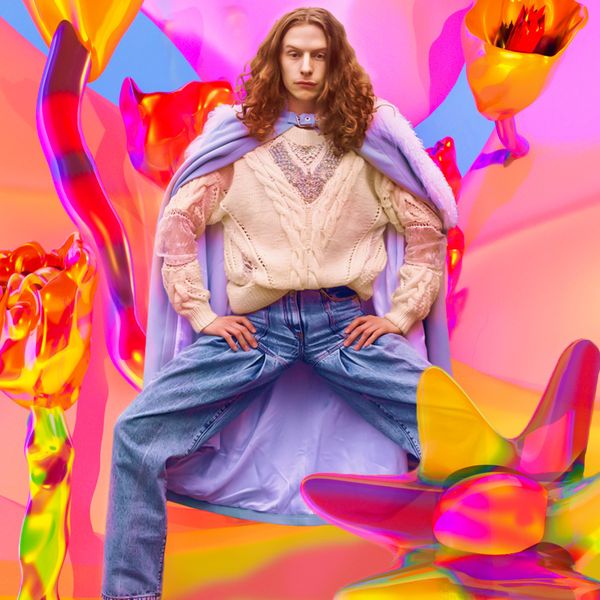 "Whoever said beautiful people can't be funny was right!" writes Manuel Santos AKA @themanuelsantos in their TikTok bio. Then why are we laughing so hard? The London-based actor and performer is hilarious whether strutting around their bedroom like it's a runway, giving a wardrobe tour of their treasured Zara heels or dispensing a rosé-fueled pep talk to their devoted followers (or, as they call them, "biatches").

If you could write the headline for your profile, what would it be?

Manuel: Extremely hot, skinny, self-centered and quite possibly narcissistic, will never love you as much as they love themselves. Perfect right!

Manuel looks sad and desperate, their gaze is directed to their right as they glance off camera to the abyss. Are they pleading?

Previously B*tch, but more recently Byatchesz (not the official spelling).

Last week, contrary to popular belief I am actually capable of experiencing sadness! Although my last cry was of happiness...

Definitely my future self. I hadn't met me yet, but I just knew I was going to be THE ONE. ("Jokes" aside, my mother.)

What does your star chart say about you? (Do you agree?)

A lot of things — too many things if you ask me! On the one hand I am someone very confident, opinionated and independent, but I am also consumed by my subconscious as well, so I tend to overthink and self-analyze A LOT.

1 MILLION??? Just a sec, I'm creating a charity for myself as we speak! On a real note, I would split the money and donate it to different charities that support and aid LGBTQ+ people, ESPECIALLY Black trans women! Most of the time, they are left out of the conversation or not even talked about at all, but in today's society they are the ones who need our voice and support the most! Some charities that come to mind: For The Gworls Party, Marsha P. Johnson Institute and the Black Trans Travel Fund.