It's been a big year for the "Fab Five" of Netflix's Queer Eye. They were renewed for a third season (to be filmed in Kansas City, MO) and they were nominated for four Emmy Awards. What's more, after releasing two seasons in less than a year, they've had a major cultural impact — opening up conversations about acceptance in the South, America's political divide, and how the G in LGBTQ can be more empathetic; season two featured the show's first female and trans subjects. They've also set the gold standard for friendship, at least if the number of #goals comments on their Instagram posts are any indication. We talked to all five of the guys on how they've enjoyed (and coped with) their current success, what's next for the show, and how they keep their friendship so strong.

Let's talk about your meteoric rise — the massive Instagram following, the endless press. How have you coped with the fact that the show has done so well?

Tan: We're all so appreciative of it. The fact that people are connecting so strongly with such a positive show feels great. It gives me hope about the world.

Despite the positive attention, what insecurities do you hang on to? If you were on the show, what would the Fab Five need to work on within you?

Antoni: I tend to be an extroverted introvert. In larger groups I get a little quiet. It's changed a lot but sometimes I'm hard on myself about it.

Bobby: I feel the same way. People that know me never believe I'm an introvert because when I'm comfortable around people I talk a lot. But in groups of people I don't know I'm very shy and insecure. We're lucky that we all can rely on each other when we are not in the mood to talk.

Karamo: For me it would be trust. Once I get an inclination that you're not someone I can trust, I shut you out completely. And there's room for me to grow and allow people back in.

Tan: Actually, this isn't what I could do better, it's something that I've always wanted to know. I want to learn what [Jonathan] does. I've always had a desperate desire to learn how to cut hair! 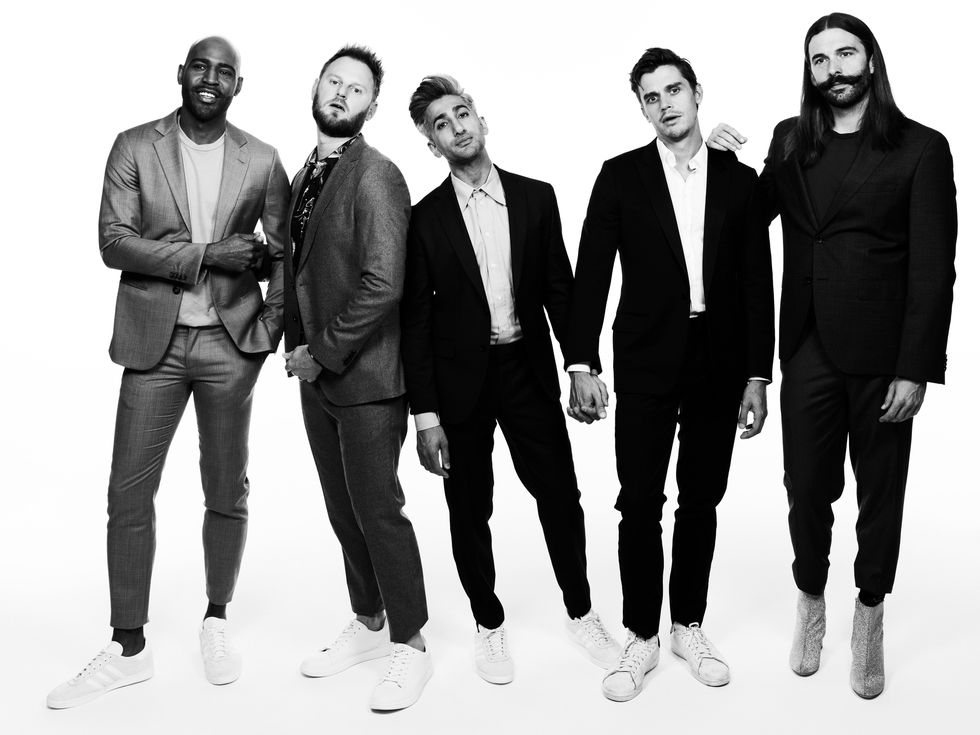 The internet has democratized content so that kids growing up in rural or conservative religious communities have relatively easy access to your show. What advice can you give those kids who might look up to you?

Jonathan: The collective shame of your community isn't your shame. Right? So the collective pain that you're experiencing isn't yours. It will dissipate.

Karamo: I would also say support is always available. A lot of times you're in the four walls of your bedroom, and you think, there's nothing here that I can do and so I'm alone. Like Bobby always says, with technology you have support on your phone right now.

Queer Eye shows people's humanity in unexpected ways. But there's a tension that exists between knowing someone on a human level and knowing their political beliefs. How do we reconcile that in instances where those two aspects might seem in conflict?

Jonathan: Separate the voter from the politician. But it does become hard to reconcile when the policies Trump voters voted for were so pointedly anti-Muslim, anti-trans, or anti-healthcare. The universe tells me, do not be a dick. I shouldn't write off these people because of who they support politically, but maybe I do keep myself a little bit more protected in interacting with them.

Bobby: One of the things we can remember when people vote for someone like Trump is they're not thinking about how it affects people outside of their community. I grew up in those areas. It's like on Facebook. We delete anyone who has different views from us because we can't handle it. [I hope when we] humanize another group of people to them, and they go out to vote, they might think about communities outside of their own.

There are so many comments on your Instagram posts referring to your friendship as #goals. It reminds me of the celebrity couple obsession of 2000s where everyone was asking Brad and Jen their secret to staying together. What's your secret?

Karamo: One of the big secrets is that, just like any family, certain people gravitate towards each other. And it doesn't mean that you don't love and respect the other members of the family, but you allow certain relationships to grow and flourish. And I think that's part of it. We don't have to force certain friendships because we're all friends.

Jonathan: I can't tell you how many interviewers ask, "Whose job is the hardest?" And we see it in Instagram comments, too. It's human nature when someone's flourishing to try to ask, "What's the chip in the armor?" We're all secure in our friendship. That's why a lot of that stuff hasn't been able to get between us. And when stuff comes up we talk about it.

Tan: We really do.

Antoni: We really communicate. It's like in a relationship, as long as everything's fine between the four walls of the home, whatever our home is. Right now it's the Sprinter Van outside.

Tan: As somebody married for ten years, that's also what we do in a marriage. You communicate. You talk about things that are hard.

Jonathan: I just think it's hard for me because everyone likes me more than they do each other.

And it's hard being the only one of us that's already an Emmy nominee. But we get through it.

Tan: Exactly. [Laughing] And I don't want to belabor this point but it's unwise for us to try and convince people that things are perfect all the time. I don't want people to look at us thinking, "Well, why can't we make our friendships work this way?" We are so blessed and we get along so well, but there's always some conflict that you have to work through. Thankfully, we do a very good job at dealing with conflict between ourselves.

Jonathan: And we have amazing editors.

So much of your show is about family — specifically the bond between a parent and his or her child. Karamo is a father, the rest of you might be some day. How has this experience changed your perception of fatherhood or your relationship with your own dad?

Karamo: It definitely triggered me in some ways because my relationship with my father only got worse since this experience. We've been on shoots and he has later called to threaten me. If it wasn't for having Bobby there to support me, I would have probably ran and jumped off the cliff. And I —

Tan: Can I ask you a question because I haven't asked about it? Why is it worse now with him? Is it because you're so openly gay?

Karamo: Muslims and Rastafarians are not the same but are very similar in a majority of [cultural] issues. We don't really talk about this, but it's the same things that you experience. They don't want to see. And so having these conversations as a father, and having a relationship with my kids, and helping these men have great relationships with their kids and also connect with their fathers, knowing that I will never have a relationship with my father is the most heartbreaking thing. As much as I try to pretend as if I'm okay with it, and try to pretend that I just have the strength to deal with it, it just breaks my heart. Because I don't have a dad anymore. And I never will. But he's alive. He's a couple hundred miles away, and I will never see him. So... that took a turn didn't it? Wow. Downer.

Bobby: No. Be honest.

Related | Karamo Brown on Why We Need to Talk Less, Listen More

Yeah, thank you. Thank you for sharing that. Does anyone else want to weigh in?

Jonathan: My stepdad passed away in 2012 after a three year battle with bladder cancer. And then in 2016, my dad had four really severe strokes in a row. Watching both of them go through that taught me that life is very finite. If I would have known I was only going to have those 16 years of my stepdad, there's more I would've said. Fatherhood is important. If you're lucky enough to have a father in your life that you have a relationship with, really go in on that. It's not just fathers. It's people.

You featured your first woman on season two and someone from the trans community as well. What sort of underrepresented population would you like to explore in future episodes?

Antoni: I'd like a first-generation family of immigrants. Ted Terry [in season two, episode eight] touched a little bit on Syrian refugees. There was so much more going on in that town that was really special that we got to see. It stayed in my brain that there's so many different cultures that we can explore and learn more about.

Karamo: I would love to work with a person with a disability. It's crucial. As we talk about marginalized communities, the disabled community is one we overshadow. We don't think about their struggles. Unless they're in your family we're not thinking about people with disabilities.

Jonathan: The caveat is, just because we have one person who has a different body form or is living with a disability doesn't mean that we've shown that community. It's not because we've done one trans episode and one episode with a woman we somehow checked out the box, and we don't need to look at that anymore. Inclusivity is this really gigantic subject and it's taking such a long time to open up that conversation.

Let's wrap-up with a little rapid response. What's one thing you can't live without when you're on the road?

Karamo: A lot of candy and a lot of soda.

Jonathan: Anything Aly Raisman has ever done in gymnastics, especially the 2016 women's team all around final in Rio on YouTube. She cries so hard. It's so good. Any Olympic moment.

Karamo: I would say go watch M*A*S*H. It's so good. Like literally, M*A*S*H is probably the only show that still makes me cry.

Karamo: No... I know a lot of people are like, what is this? It's old school.

Tan: Mine is A Normal Heart.

Antoni: Can we do music? I love instrumentals. Albinoni Adagio in G minor. It's the most emotional fucking piece of instrumental music you've ever heard in your life.

The 'Queer Eye' Cast Hangs With AOC in DC