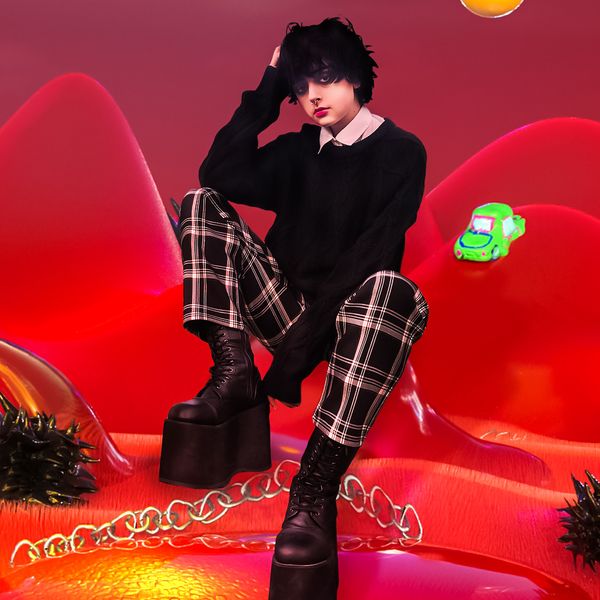 Think of Syd, AKA @punker_irl, as TikTok's Manic Panic product representative. He's reworking the mall goth look for Gen Z and gaining millions of fans while doing it. Hit follow to watch him raise mental health awareness while recreating Just Dance routines, lip sync to everyone from Doja Cat to Lil Peep, and even single handedly save the USPS by offering a PO box for fans to send letters to and promising to write back. Sometimes in full clown makeup.

My favorite animal social media account is @Monkeys400 and the #MonkeyMonday because they make me happy.

My favorite appetizer is Mozzarella sticks.

I use this made-up phrase that my friends and I used to say in middle school. Instead of saying, "On god," we would say, "On baby."

I think the most embarrassing thing I've done is sign up for TikTok.

What does your star chart say about you? (Do you agree?)

I am a Scorpio, i have a Pisces moon and my rising sign is a Capricorn, so this means I'm very moody, I wear a "mask" when meeting or talking to people, and I have a very strong urge to solve problems and get over them as fast as I can.

When I first went viral my only two emotions were terrified and embarrassed.

My favorite one is the "asdf" audio that goes like, "Ahh I'm a muffin it's muffin time, who wants a muffin?" — very silly, very funny.

When the world ends, I would like to be with my friends because I wanna be with the people who make me the happiest.

What does your (UberEats, Seamless, GrubHub, etc.) order history look like?

My order history is literally just boba and s'mores blizzards from Dairy Queen.

The last song I listened to was "Francis Forever" by Mitski.