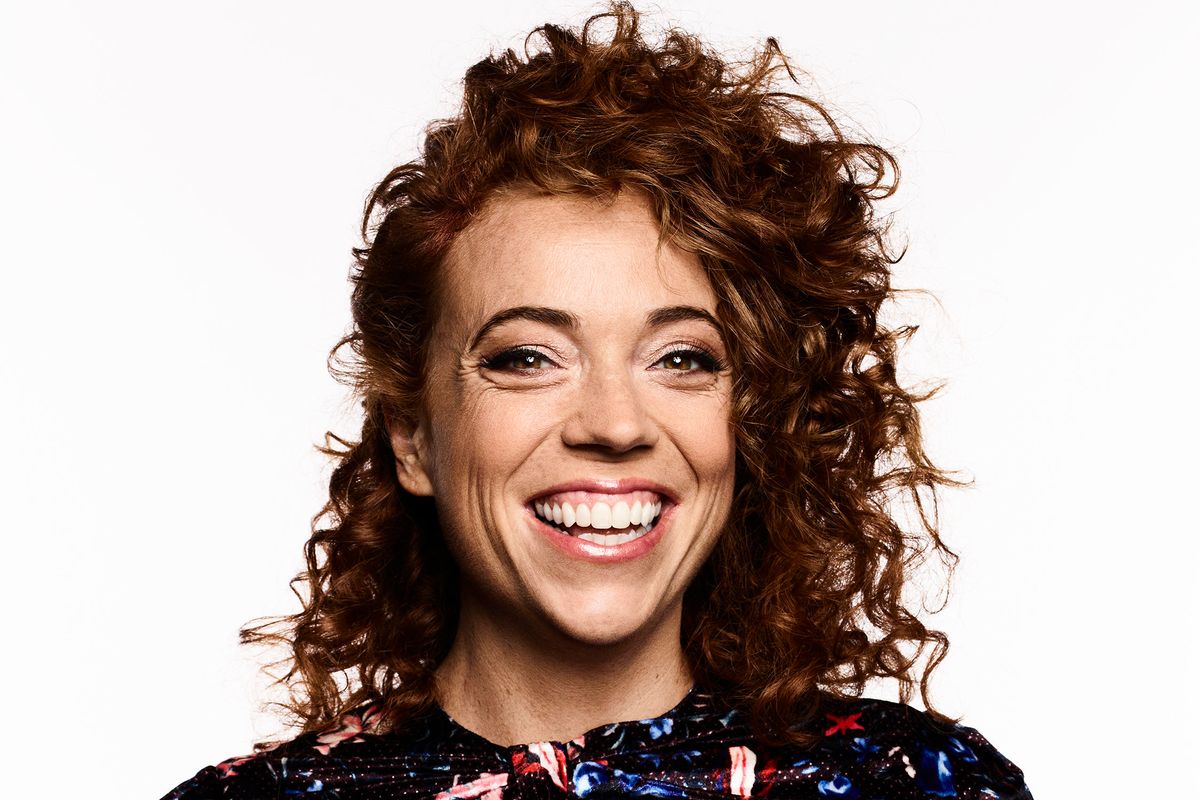 Michelle Wolf has arrived, and she's bringing a new voice to comedy. (Or rather, the same self-aware, self-deprecating, "shrill" voice that has come to characterize her public image and her comedy.) Most recently, the 33-year-old stand-up comedian — whose stunning résumé includes stints at Upright Citizens Brigade and Comedy Cellar, staff jobs at Late Night With Seth Meyers and The Daily Show With Trevor Noah, an HBO comedy special, Nice Lady, and, of course, her viral set at the White House Correspondents' Dinner this past April — has brought her cutting yet charismatic humor and well-honed point of view to her new weekly Netflix series, The Break with Michelle Wolf, which offers a reprieve from the "seriousness" of other late-night comedy shows. "We make fun of the [Trump] administration, but I make fun of Democrats all the time too," Wolf says. "I think everyone's messing up, and I like to point that out."

PAPER caught up with Wolf, in between filming a sketch for The Break, to talk about her Netflix show, missing stand up, and why she likes to call everyone out.

You had a birthday over the summer. How did you celebrate?

I always go for a run on my birthday. That's how I like to start my birthday. I was taping an episode of The Break that day, and my staff got me a cake and a frozen margarita machine, like a Margaritaville. It's still in the office. You can just make whatever flavor ones you want.

Isn't there a Margaritaville hotel opening up in New York?

Yeah, I used to work at a Margaritaville restaurant in Las Vegas, so I know all about it.

You've come a long way. How has the transition been from being in the writer's room to correspondent to producing and starring in your own Netflix series? Which is so dope. Congratulations.

Thank you. It's all good training. I feel like everything I did really prepared me to get here. You look back — I think about my time at Late Night With Seth Meyers and I'm like, Wow, I can't believe he wasn't more stressed out.

He came by your show and joked about being tired from filming two shows that day.

People should talk about how tiring it is. It's very tiring.

What's your schedule look like now? You're an avid runner. Do you still have time to run?

I still run. Sometimes I run to and from work, and I still run on the weekends. That's been pretty consistent. I haven't been doing as much stand up. I'll obviously go back on the road after we're done taping The Break. I really miss being on the road. You get into a routine with it. You leave on Thursday afternoon. You have a show Thursday night. You do Friday, Saturday nights, then you fly back really early on Sunday. You get into a really nice groove. I miss that a lot. I'm really looking forward to that.

What it's like to do a comedy show for Netflix? How is that different from the late night shows on major networks?

Not a lot of other hosts are stand-up [comedians]. I mean they do stand-up comedy, but they're not known for it. I think I've really honed my point of view, and I'm able to put more of that into the show. We make fun of the [Trump] administration, but I make fun of Democrats all the time, too. I think everyone's messing up, and I like to point that out. I also don't like to do the types of jokes that other people are doing, so I kind of steer clear from making fun of Trump because it's just being so well covered, not only by other shows, but also on Twitter and Facebook. Everyone's making fun of Trump all the time. I'm like, well, there's got to be other things we can make fun of too, which is why I like to go after the media a lot.

You called out the media in one of your episodes of The Break.

I'm just trying my best not to be the same voice. It's good and bad. It stretches me and our writers to be like, Well, everyone else is going to do this. What is something no one else is gonna do?

How do you feel about political clickbait? Obviously there are some topics that other shows also cover, but not everyone gets to make their own parade for abortion rights.

First of all, part of this is just the fact that I'm a woman, and I can make jokes like that and do performances like that. I don't really care about men's opinions when it comes to abortion. Until they start having babies, I don't think it's important. It's great to have women in late night because we need people who are able to talk about the stuff that men can't talk about or at least from a perspective that isn't just a man's perspective. For decades, all we've heard are jokes and news from a man. I tend to have a very different opinion or core take on things because it's going to affect me differently than it's going to affect them.

Right. Isn't there an expectation to cover certain news events though?

There's an expectation that you're going to hear jokes like that, but a host has to train the audience. I don't think anyone needs to cover Trump as much as they do, including the news. At some point, how many different sources can you hear it from? Yeah, he's doing a lot of terrible things that should be reported on, but it all starts to become white noise when we all talk about it all the time.

I recently learned about the term "clapter" comedy. Seth Meyers apparently coined the term, and people have been talking about how it's making a comeback in comedy.

I absolutely hate it. I think it's absolutely awful. It's so easy to do. It's so easy to get people to clap. Comedy should make you laugh, and then, hopefully, think. But first and foremost, it should make you laugh. If it doesn't make you laugh, it's not comedy. It's very easy to get clapter. You can go into a room of liberals, and go, Trump is an orange clown and he's bad. And if you wait long enough, people will clap. If you say something obvious that they're going to be on board with, people will clap. Clapter is such lazy comedy.

And good comedy is hard.

Good comedy is hard. Especially in this time of Trump. Coming up with a fresh take seems impossible, but if you can't then you shouldn't do anything about it. If you can't come up with a take that you haven't heard, then you should move onto something else.

How do you and your team assess what topics to do and what to skip?

We're never going to go into a deep dive of border policy. We can make fun of the news, but we try to keep it to what we're interested in and what made us laugh the most. The abortion sketch was something I really wanted to do for a while. Hopefully, at some point, we'll do a #MeToo thing. Everything is political — I mean, like, life. Laws are a part of life, and laws govern everything we do. I don't necessarily like being lumped in as a political comedian. I try to talk about bigger social issues and how what's happening in the news affects that.

On a lighter note, you're a sneakerhead. When you're buying a new sneaker, what do you look for?

First of all, I have to get them on eBay now because they're all wedge sneakers and Nike doesn't make those anymore. I absolutely love them. There are some people in Taiwan that apparently stock piled them or something because I'm able to find some from there. I like bright colors. I like interesting patterns. Things that complement an outfit or are the statement piece of your outfit. A lot of times I'll just wear a black or a navy blue shirt and then my sneakers are what stand out.

How many do you have now? Do you try to wear a different pair on every episode of The Break?

I probably have over 50 pairs. Some of them are in varying stages of wear and tear that I don't really wear that much anymore because I don't want to ruin them. We've done a pretty good job of not repeating which pair I wear on the show. My one stylist has been working with me for so long that she knows that that's what I wear. She's used to it. I always do shows in sneakers.

How have you been dealing with the new level of fame? Do you get recognized in New York or when you leave the city a lot?

Since the show started taping, I haven't gone anywhere and I've been working nonstop. If I go out on a weekend, I get recognized pretty often. But I don't know. I haven't been anywhere else other than New York. I'm interested to see. New York's liberal. I'd be interested to see what happens when I go to a conservative place. There's a lot of conservatives that I might not be their favorite.

I guess you'll find out when you go on tour. Do you have plans in place for a comedy tour?

We're working on it. I'm doing some shows in Brooklyn, Portland, and San Francisco. We're going to build out from there. I'm excited. I've never been to Portland, Oregon before and San Francisco is one of the best places to do comedy. After we break for the season, I'll get back into doing stand up every night. I have so many things I want to talk about that I haven't had time to yet. I have a lot of new ideas that are not funny at all yet, but I'm excited to make them funny. It's the best part of stand up — when you have a bunch of ideas, you have no idea how to make them, and you have to figure it out. It's like a puzzle.