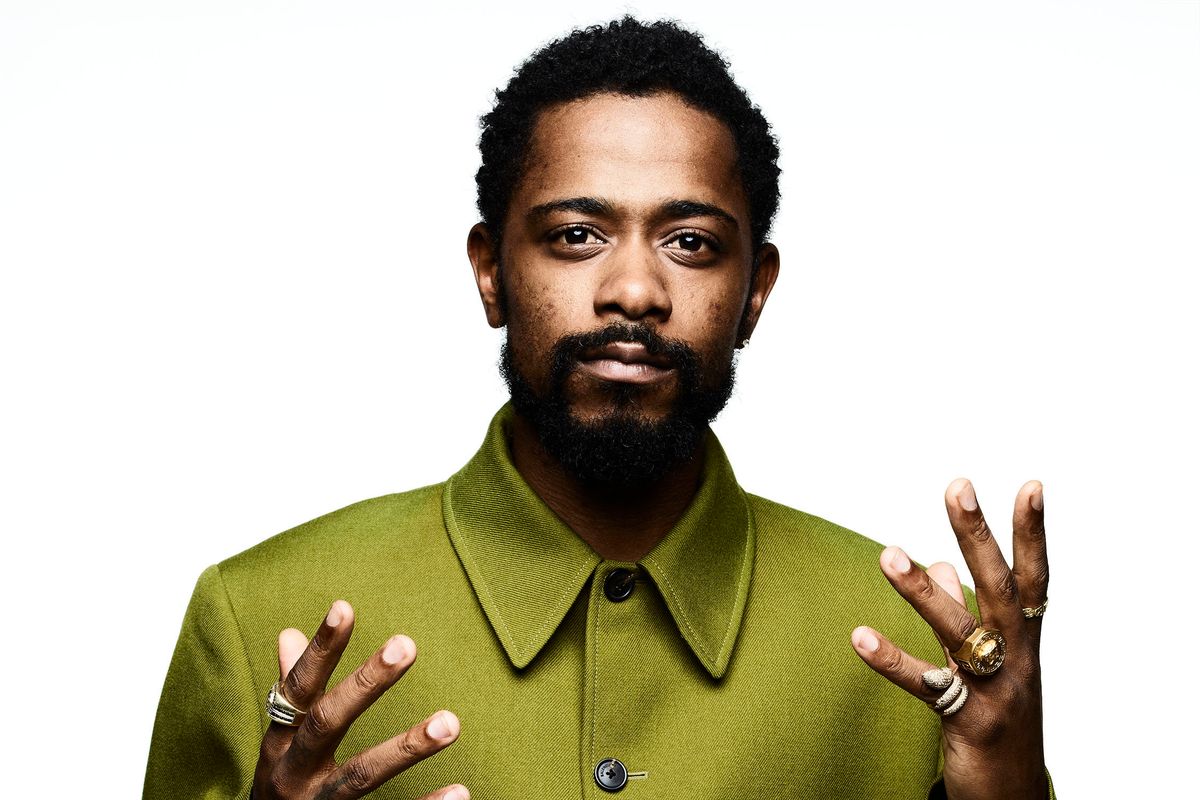 Lakeith Stanfield has brought a distinct type of enigmatic energy to scene-stealing parts in Jordan Peele's award-winning Get Out and Donald Glover's critically praised series Atlanta, and this summer the actor has shown even more of his range with a starring role in Boots Riley's buzzy indie film, Sorry to Bother You. Despite this success, Stanfield remains semi-reluctant about his growing profile. "Fame is a weird thing," he says. "If I had a choice, I wouldn't want to be known at all." But the camera — and audiences — are desperate to see more from the 27-year-old, and with an upcoming role in the latest installment of the Girl with the Dragon Tattoo series, that choice may be entirely out of his hands.

Sorry To Bother You has become one of the most critically-acclaimed films of the entire year. How did you first become involved in the movie?

I was first introduced to Boots Riley at Sundance. It was sort of like a courting at one point. I thought he was, like, a strange fellow. He was really interested in me. He had a couple of papers in his hand and he said, "I want you to read this script I've been working on for a really long time." So I read it the first time and thought it was very strange and not something that I would be interested in. I read it again and then I knew it was something different, and then I read it again and I knew I had to do it. It finally resonated with me. Even though it was wild and wacky, it had deep implications that I thought it was important to talk about.

You've been stealing scenes in almost every role we've seen you in lately, and it kind of seems like these roles are tailored towards you more than the other way around. Are you at the point where roles find you, instead of you finding them?

It's a little bit of putting out what you want to get back, I suppose. I definitely am putting out the type of energy I want to have in the universe so hopefully I'm attracting something. I don't know. I'm always looking for jobs, always. I know this life isn't promised at all so I'm always blessed to tell stories, but I do want to tell stories that I connect with because that makes me tell them well and I want to tell them well. So the stuff that you see me doing now hopefully will be aligned with where I am at the time unless I lose my mind and retract that statement [laughs]. But as long as I can stay sane, I'm trying to do things that speak to me and where I am at the moment. Hopefully it reflects something of who I am, or an aspect of that. I'm not just attaching myself to anything I see because once I do something, it's permanent. It's like a tattoo. So I like to do work that means something, not no fly-by-night thing. I want to do work that myself or my family could look back on and say, "Well, that was cool. At least he didn't completely sell out."

You've also been making music. Tell me a little bit about how that came about, and what some of your inspirations are?

I've been doing music before I started acting. Actually, acting is just my ploy to start doing music without repercussions, without having to make a hit or anything like that. My music is very dark, it's very personal, some would say it's not that family-friendly… I don't make happy music. So I don't know, I guess it comes from all the frustrations I have. Some of those frustrations even come from my work in acting. It's a stressful, high-strung job, so when I make music, I get to throw all of that against a wall and just be in a whole other journey. My music scares people a little bit. I don't even release a lot of it because I don't think we're in a good climate for it.

If you had a choice, would you rather be known for your music or your movies?

Honestly, I would rather not be known at all. It's cool to be on a public platform but if it was up to me, there wouldn't be any of this fame thing. I just think all of it is very extra. I think people can do stuff without attaching themselves so much to it. Idol worship is not a good thing. We're just humans, you know? Fame is a weird thing, you know? It seems nice to people... and I'm not even really that famous. I'm just walking through L.A. or New York famous. It's still a weird, strange thing. All that attention is a lot.You have to just learn to navigate and push through. That's just a part of it, you know?

If there's one thing you would want to be remembered for at the end of your career or your life, what would you want it to be?