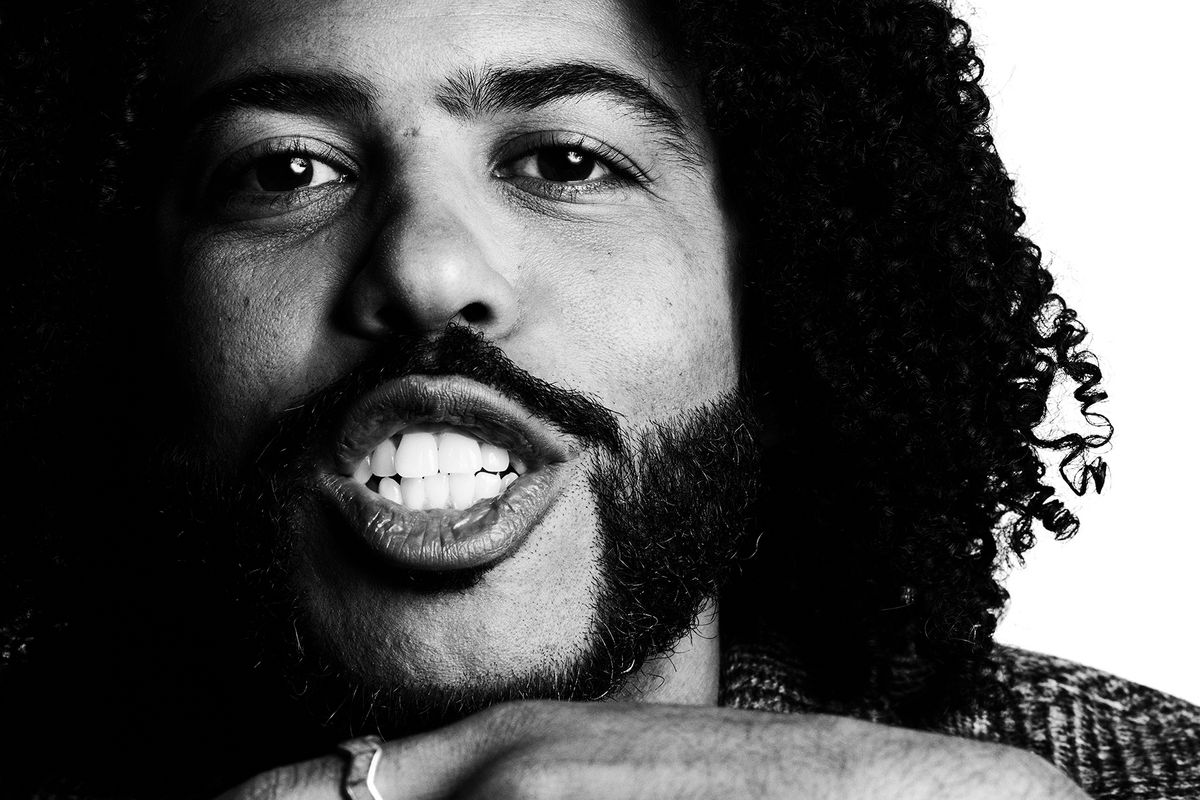 Daveed Diggs' new film, Blindspotting, has been a long time in the making. The actor, writer and Tony Award-winning rapper (that'd be for his breakout dual role as Marquis de Lafayette and Thomas Jefferson in Hamilton) teamed up with his close friend, co-star and fellow Oakland native Rafael Casal to write the film back in 2009, way before his star turn on Broadway or his memorable parts in shows like Black-ish and movies like Wonder. Diggs says one of the impetuses for writing the screenplay was the story of Oscar Grant, the 22-year-old shot and killed by a police officer at Oakland's Fruitvale BART station. And, though it's been nearly ten years since that tragic episode and since Diggs first started working on the film, the buddy dramedy exploring gentrification, police brutality and white privilege couldn't feel more timely. "We always say we wish it felt like a period piece," Diggs says. "Like, 'Oh, man, 2009 sucks.' But it's not the case. We got things to be pretty contemporary in there."

It's been a pretty wild couple of years for you. You've won a Tony, a Grammy, written and produced your own movie... What would you say the biggest pinch-me moment has been for you?

Honestly, probably when we found out Blindspotting was going to go to Sundance and be the opening night film. Rafael [Casal] and I have been working on this for a decade and most of the time just assuming it would never actually happen. I think even when we made it, the assumption was, 'Great, maybe we'll get to put this on iTunes or something. This will be a straight to streaming thing that we're really proud of and a lot of people at home can see.' Getting into Sundance was out of what we thought was possible.

Tell me more about the process writing Blindspotting and developing the themes and the plot within in.

In the conversations with [Rafael and our producers], we knew it was going to be a film in verse to some degree but we also knew we wanted it to be about Oakland or about the Bay Area because that's where we're from. And it was a thing we felt we hadn't seen represented accurately. We wanted it to star us. That was as much as we knew. Right around that same time, Oscar Grant was killed at Fruitvale BART station, which I was living two blocks away from at the time. To make a film about Oakland meant that... these kinds of police shootings were going to be a part of it. That was sort of the impetus for the film. Over the long gestation period of this piece, it was a lot of checking back in with the script and modernizing it and seeing if the ways that people were having these kinds of conversations in the film felt honest today or if they needed to be updated.

I feel like it's extremely important in today's environment.

It's unfortunate in a lot of ways. We always say we wish it felt like a period piece. [That] we were like, "Oh, man, 2009 sucks." But it's not the case. We did the final draft a month before we shot a year ago. We got things to be pretty contemporary in there.

Blindspotting shines a light on the topic of gentrification. I know that's something that young people especially grapple with a lot. I don't know if advice is the right word, but do you have any thoughts on best practices or what you're supposed to do in that sort of situation?

It's complicated. I think we try to highlight that in the film, that there's not a single perspective on it. I've been a gentrifier ever since I left Oakland. The reality of the situation is economically, the difference between the folks that are coming into a neighborhood and the folks that are already there is relatively small. It feels huge because of how drastically your landscape changes if that is your home.

I moved to Washington Heights because that's where I could afford. I didn't know anything about the neighborhood. It was nice. It felt safe enough for my girl to walk around at night. Which is a big change. That kind of safety is an element of the gentrification. The thing that I think is important is that you don't "Barbecue Becky" yourself. You can't move into a place and assume that what you think is culturally appropriate is culturally appropriate. It's not about you. If you go into a place where people play loud music on the street all the time or people hang out and party with each other, you have an opportunity... to interact with that and to try and learn something about a culture that you're not a part of and figure out the respectful way for you to participate.

Moving into a place that has had long-standing traditions and being like, "These traditions aren't for me. Let me get the police here," is a real horrible misunderstanding of what you're doing. Just move somewhere else. If your intention, whether you know it or not, is to come into a place and remove the culture elements from it, don't move to that place. It's not that you won't ever have misunderstandings and it's not that you don't have some right to make your own space in there, too. I think the whole thing is to just try to honor the complexity and be real with people. Talk to your neighbors. Your new neighbor, the neighbor who moved in at the same time as you, and the neighbors who have been there for 20 years. Hopefully, for the folks who have been there, it won't feel as violent as it sometimes feels.

Blindspotting also talks a lot about identity and how other people perceive your character, how your character Colin perceives himself, and what it's like living in his own body. Did you at all tap into your own experiences while you were filming? How did your experience differ from his?

Yeah, of course. Everybody in the film is a composite of folks who we grew up with and around. You tap into your own experiences, but also friends' experiences and family and just trying to take Colin's circumstances and honestly reflect those out in front of the camera. I've never been to prison. In the writing of that, we were talking to friends of ours who had. I have close friends and family who have been on probation, so I know the kind of trap that that is because I've watched them have to navigate it. The premise of this film was to write a comedy that doesn't ignore the world around it. If we have a character on probation, then all of those trappings need to be woven into the film. We need to watch him try to navigate this minefield.

One last thing: Who would you most like to rap battle to the death?

I don't battle, so I wouldn't battle anybody. I already lived my rap collaboration dream because we have a song with E-40 on the soundtrack who's my favorite rapper of all time.

You're done. You've got it.

I'm done. My rap boxes are all checked.