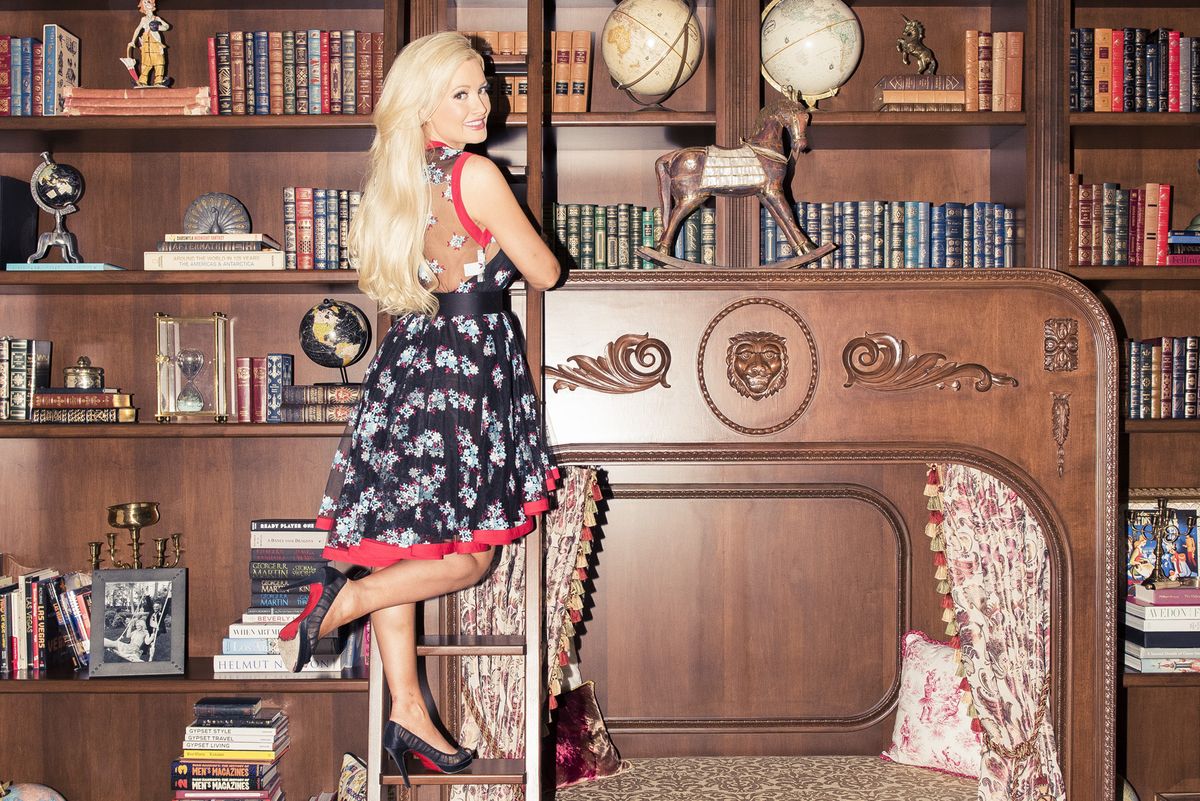 While Holly Madison might forever be linked to Hugh Hefner's famed Playboy Mansion from her days as Hef's #1 girlfriend and star of E!'s hit reality show The Girls Next Door, she's gone on to build a life and become associated with a new glittering locale: Las Vegas. After leaving the mansion, Madison moved to Vegas and launched her own spin-off reality show, Holly's World, chronicling her escapades on the Strip. More recently, she's written two memoirs and a guide to her new home. Along the way, she met and married Pasquale Rotella, an event producer whose company, Insomniac Events, is the force behind the EDM bacchanal Electric Daisy Carnival. Together the couple is raising two children and continuing to live out a Las Vegas fantasy that starts with a beautiful home designed by an Imagineer from Disneyland.

How long have you been living in Vegas?

I love it. It's a really unique place, because it has all the excitement any big city can offer, but it also has a small-town vibe because the actual population isn't that big. It has a small-town feel where everybody kind of knows everybody else, but there's so much to do at the same time.

Where are some of your favorite spots in the city?

Oh my gosh, so many! I love Estiatorio Milos, the Greek restaurant in the Cosmopolitan. It's one of my favorites. I love shopping at the Fashion Show Mall, which is right across from the Wynn, and I also love shopping at some of the stores at the Bellagio. I love the Wynn property -- I love eating there at Jardin or the Country Club. Those are some of my favorites off the top of my head.

Do you remember the first time you ever went to Vegas?

Yeah, I do! It was really memorable because I was 22 and I'd just moved into the Playboy Mansion, so I went with Hef and all the girls. It was a very luxurious trip so it definitely is not typical of what most peoples' first trips to Vegas are like. We stayed at the MGM Mansion, which is a private, high roller complex located behind the MGM Grand, so it was really amazing and beautiful and unlike anything I'd ever seen. Our hotel suite had a pool inside of it and that was the first time I'd ever seen anything like that, so that was really amazing.

Do you remember where you guys went out?

We saw the Blue Man Group at Luxor. We were there for two days and we went out both nights, and this was back before nightclubs were even really a big thing in Vegas. Bottle service was still kind of a new thing [Laughs]. So we went out to two different clubs and they were the only big clubs on the Strip at the time. It was Studio 54 at MGM and this club called RA at the Luxor.

Now that you're a local, what are some in- the-know spots you really love?

There's a steakhouse called the Golden Steer that's the oldest restaurant in Vegas. They have these old, vintage booths and they're named after the old celebrities who have gone over the years -- everyone from Elvis to Marilyn Monroe to Sammy Davis Jr. It's a great place with amazing food and great history. It's kind of off the beaten path a little bit.

Has living in Vegas affected your style at all? Has your fashion sense changed a lot since leaving the Mansion?

I definitely got more conservative. Obviously being a Playmate and being involved in that whole scene, you're wearing stuff that might seem appropriate to you and everyone else around you but no one else would think is appropriate. And in Vegas, anything goes a little bit, too, so when I first moved there I was doing a reality show [Holly's World] and I recently wrote a book about that time in my life -- a memoir -- and I went back and was watching the first two seasons and there was a huge shift in the clothes I wore between the two seasons. The first one, I'd just left all the Playboy stuff behind. I would wear these skirts that were so short that if I moved at all, you could see my underwear, or I'd be wearing a really tiny tank top and this cute, colorful bra underneath and the bra would just be out, and so it was completely inappropriate although it didn't seem that way to me at the time. And then I watched the next season, which was only a year later, and everything had changed. I was wearing dresses and heels every day and a little bit nicer things, and so I came into my own style a little bit more, matured a little bit more, went a little more conservative -- although I don't think anyone would ever look at the way I dress and say I was head-to-toe conservative, but definitely more than I was.

How would you describe your style today?

I don't really have one look, because I'm either desperate to t in a workout -- so I'm running around in basic, workout clothes — or when I dress up, I really love to dress up. I just like classic looks. I love to shop at Alberta Ferretti; I think they have great stuff. As far as dressier things, what dominates my closet are classic, pretty things that I think I'm still gonna be interested in five years from now. As far as day to day, I'm probably dressing way younger than I should be. But I have so much stuff from Hot Topic, it's stupid.

You have such a beautiful yard. It doesn't look like what you'd think of in Las Vegas.

It was definitely a huge attraction for my husband and I when we were looking for a house to buy. You don't see it often in Vegas -- it's crazy. We're lucky enough to live in a community that has its own well so we have some water rights as well, but it's rare because there's a lot of really big, amazing houses in Vegas but they're usually built on relatively smaller plots of land.

Can you tell me more about the house and your decorating tastes and influences? You have a great library.

The house itself is Spanish style. When we first bought the house, the owner lived elsewhere. It was a second or third property and they rented it out — the UFC shot The Ultimate Fighter there so there was blood splattered when we arrived. It was funny because I had actually watched that show and remembered seeing the house and thinking, "That's not in Vegas. There's no way there's a yard that big." So the house was kind of bare when we got it, so we started from scratch a little bit. I wanted a library for my book collection and I wanted a two-story Beauty and the Beast-style library, so we did that. We hired an 'Imagineer' from Disney to come up with a design for the house and she did everything basically -- she did a retro kitchen for me, she did a pantry that used a lot of the same elements of the candy store she recently redesigned on Main Street in Disneyland. We love the details of all the things she did. She did the remodel of the private club in Disneyland and it was really beautifully done, so we're really pleased with her work. We wanted a property where every room was a little different and the sky's the limit for how whimsical we wanted to go, and we're really pleased with how it turned out.

What is your favorite room in the house?

It's hard to say. As far as a top three, I love the living room. It's the dream room I've always wanted with the two-story library. It's such a comfortable place to sit. It's always real quiet in there. I love the kitchen, too. It's like the dream kitchen I've always wanted since I was a child. I love spending time there. It's big enough and has an island, so it's also a social space and we throw holiday parties. I usually put the hors d'oeuvres out in the kitchen and everyone hangs out there. But I also love my bathroom. I have a really cool bathroom with an amazing bathtub and I love spending time there, too, so it's hard to pick!

Photos by Jake Rosenberg of Coveteur

Styling by Stephanie Mark of Coveteur

Production by Lauren Gonzalez of Coveteur