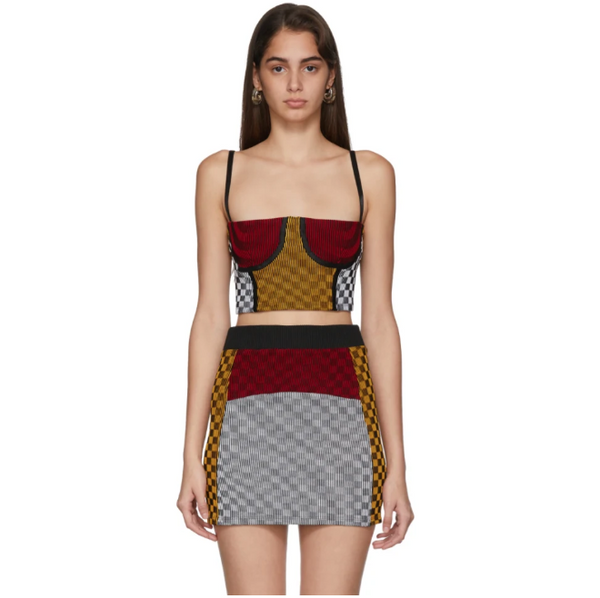 These Illusion Knit Bustiers Are the Next Big Thing

It's rare for a young and rising designer to develop recognizable brand signatures so early on in their career, but Paolina Russo has already accomplished this feat. Russo, who is Canadian but based in London, is known for employing an illusion knit that mimics the effect of holographic images. This technique features heavily in her exclusive collection with (another Canadian) retailer SSENSE, which launched online this week.

Seen in bustier crop tops, body-hugging skirts and fitted minidresses, the 14-piece capsule shows off Russo's strengths with textile development and color blocking. For the 24-year-old, such skill and craft was honed from experimenting with fabrics back in her hometown of Markham, Ontario, where she repurposed old sporting equipment into corsetry with a collage and hand-crochet effect.

In addition to her signature illusion knits, Russo designs avant-garde looks from a combination of upcycled and unconventional materials, including leather from old soccer balls and other discarded sports parts. According to an interview with SSENSE, a lot of this is due to Russo's suburban upbringing and experience with competitive sports in high school. "That is such a rite of passage when you live in the suburbs, because there's really nothing else to do," she said.

Russo's quick rise seemed to happen all at once. After interning for Maison Margiela, she first caught the attention of the industry with her L'Oreal Professional Young Talent Award in 2018 for her Central Saint Martins graduate collection. She has since had her designs worn by the likes of FKA Twigs for the singer's "Home With You" music video. She's currently working to complete her MA in knitwear at CSM.

Check out Russo's interview with SSENSE as well as her exclusive capsule collection here.