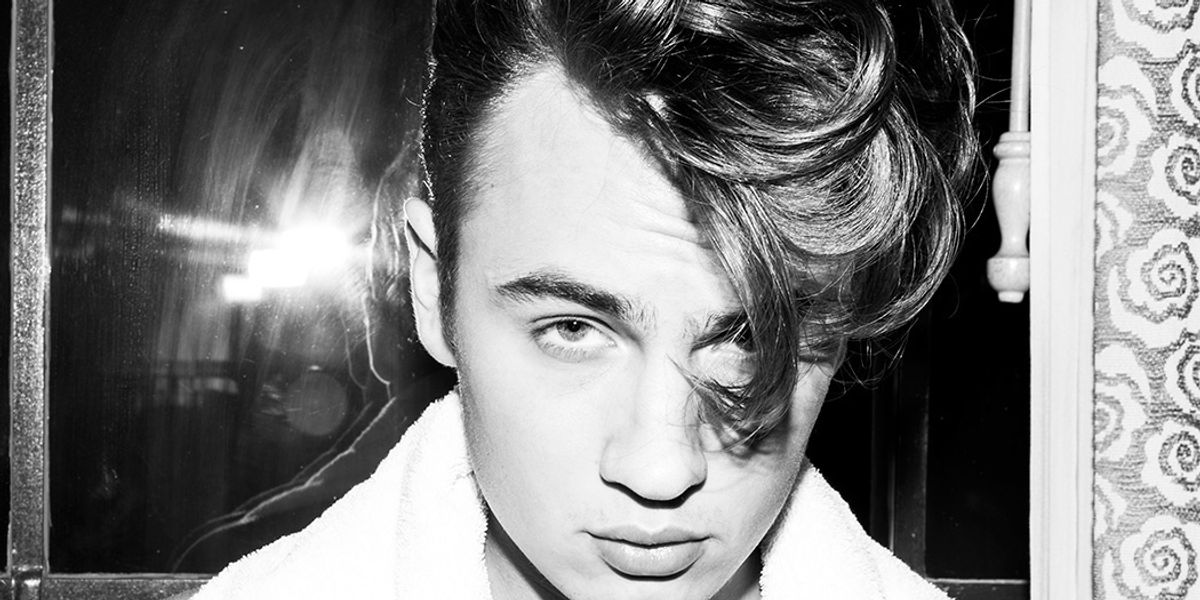 When your parents are a mega-famous former Playboy bunny and TV star, and a drummer of an iconic metal band, you'd think your entire life would be minutely documented in public. But for Brandon Lee, the eldest son of Pamela Anderson and Tommy Lee, growing up was a more private affair, as he and younger brother Dylan were kept out of the entertainment industry's glare. Now, however, he's whole-heartedly pursuing the spotlight, working as a model and launching an acting career. He talked to PAPER about his throwback style icons (James Dean and Marlon Brando), getting the acting bug, and why his bucket list includes dying in a Tarantino film. 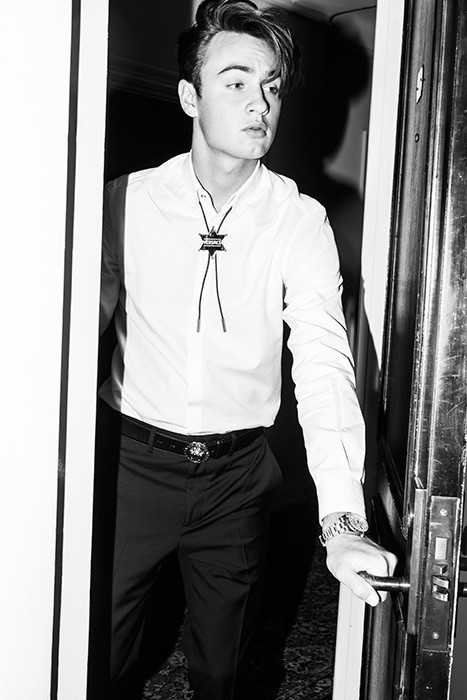 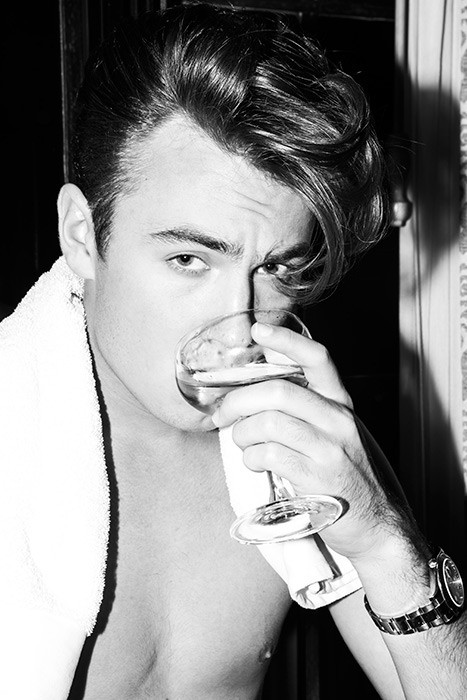 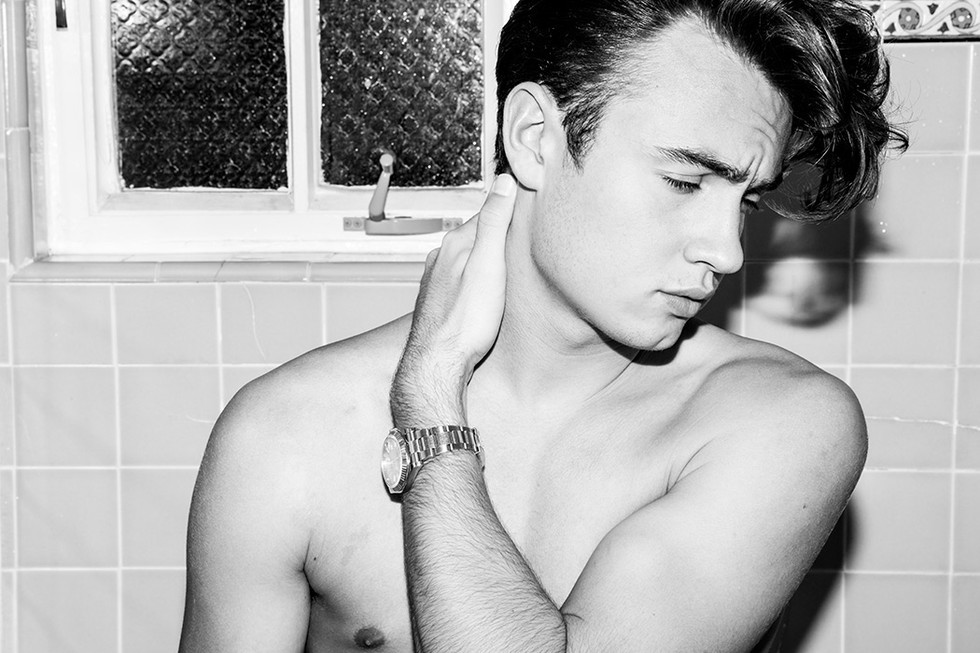 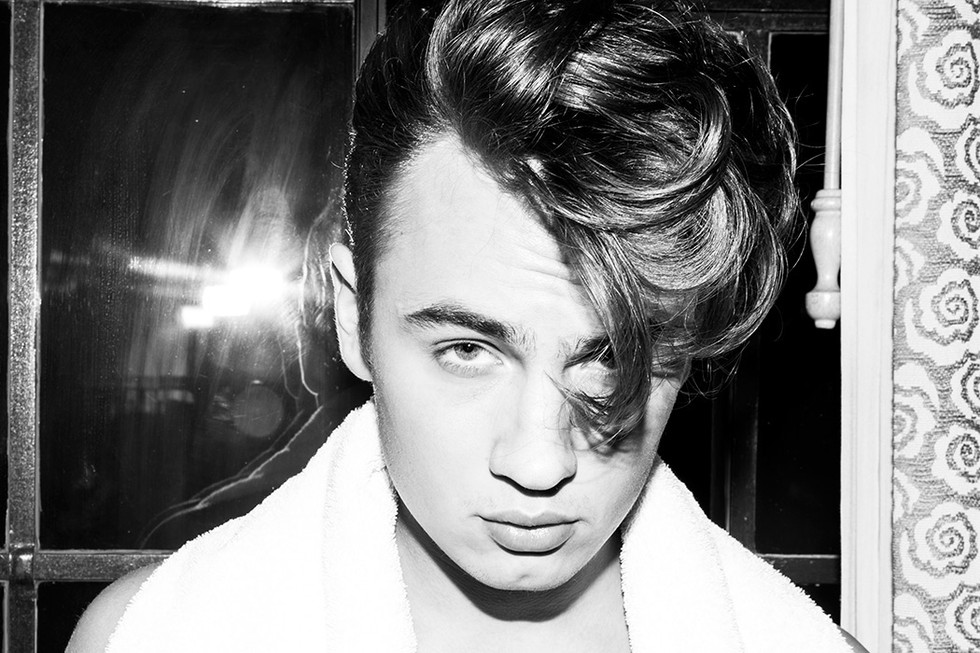 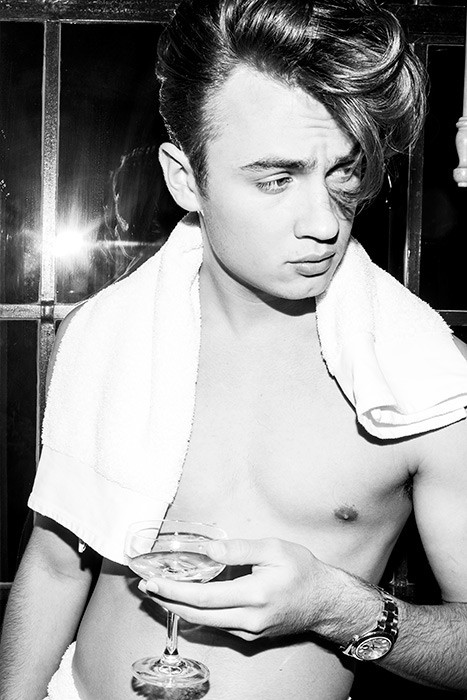 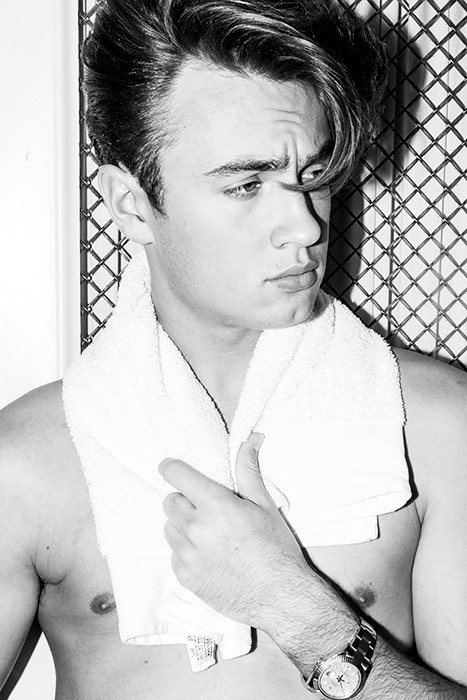 You're very dressed up today, and you have your Versace bolo look. Are you always so into fashion? Do you always like to have a look on?

Yeah. I always like to keep it really classy and kind of old school. I'll wear suit pants with my white t-shirt tucked in and with dress shoes on, and that's pretty casual for me. I like to keep it old school, like Marlon Brando or James Dean. That's when people stopped being cool. There aren't a lot of cool people anymore. There's a lot about that era that I love, hair slicked back, all that kind of stuff. It just looks so neat and will never go out of fashion. As long as you look good in a white t-shirt, black pants and dress shoes, you don't have to worry about taking all these big risks with like metal arms.

I worked for Vivienne Westwood for a little bit, which was amazing. I went to London for a while and I took a lot from her husband, Andreas [Kronthaler]. He is the most stylish man I've ever met. He puts on anything, touches you or moves one finger and he looks amazing just like Vivienne. He told me, "You want to be able to throw anything in your closet on, with anything, and it just look good." I want to be able to combine different stuff. That's my philosophy. I spend a lot of time on that. [Laughs] I rarely wear a full suit--except I was feeling a full suit today.

This Versace bolo tie is your favorite piece of jewelry?

It's cool because no one ever sees a bolo tie anymore. I saw it in the store in Vegas—of all places to see a Versace bolo tie—and I was like, "This is the modern day, I just want to look like a rock star cowboy," or whatever. It's my favorite. It goes with anything; you can wear it with a t-shirt. But I've never seen anyone else with one, which is crazy because Versace is usually so massive. You can buy it all.

Even as a small kid, were you interested in fashion or did it develop later?

As a small kid, my parents would throw the most ridiculous shit on me. I see so many baby pictures of me wearing beanies that said, "I heart babes" on the front, or a Playboy beanie, and I'm wearing Ugg boots with my hair down to my shoulders. My mom wouldn't let me cut my hair till I was 12 years old. I look like a girl. It was crazy. I shaved my head, went to school and no one knew who I was. I didn't have much of a choice with my wardrobe. I wouldn't say I would have necessarily chosen those clothes, but it's part of who I am. If it were today I probably wouldn't wear it.

It's true. It got you into the suit despite being in the Playboy beanie.

Yeah. I mean, it's adorable kid stuff but once you get to around 11 years old, you're like, "Shit I need to change this, people are making fun of me." [laughs].

You're an actor. How did you get into that?

I've always been into film, and I've always been into entertainment. I arrived into that world. I thought early on in my life that I would always want to stay away from it, but the older I got the more I loved it. I must watch five to ten movies a week. I'm a cinephile. When I was younger I would do a lot of film. I worked for [skate and surf clothing company] RVCA, and my brother was sponsored by them for surfing.

I would always shoot these short surf films. We would post them online. I think there were three of them. I used to always shoot videos of my friends skateboarding or just running around doing crazy shit. Then I thought one day, "I'm a lot better than my friends in front of a camera. I should get someone to film me now." That's around the same time that I went to boarding school in [Vancouver Island]. It wasn't a fun boarding school. I was really an athlete more than anything growing up. Then my second to last year I started to watch the musicals, and it was fun. Our school would take the musicals down to the city center, and there would be 800-1000 people you would be performing in front of, for five nights. So I was like, "I'm going to try this." I did my first musical, Shrek, and I played Lord Farquaad. I was dancing and singing on my knees, and it was the hardest thing I've ever done in my entire life, but it was the most fun I've ever had. There's nothing like the feeling where you just pour your heart into something, and all your time and effort, and it comes together so well. When you go out at the end, and you get a standing ovation, at that moment you get the instant gratification. It's not that that's the best part about it, but it's so inspiring. I was like, "Damn if I could do this for the rest of my life, I would." When I came back to L.A., I started to get really into my classes with Ivana Chubbuck. Then I went off to college for two weeks in Toronto.

Two weeks. [Laughs] I sat in my theatre professor's class, and she was saying some stuff I really didn't agree with, and I was so upset about it. I felt super isolated out there. It was in Kingston--it wasn't even in Toronto. I just felt like I wasn't in the right place. I have a really good sense of whether where I'm going is the right place or not, so I took a chance. I came home and I didn't tell my parents. So I show up at the house and my mom is like, "What the fuck are you doing here?" I was like, "I came home from school, I don't want to go anymore." They were pissed. I was kicked out--well not kicked out, they were yelling at me so I just left for a couple of weeks. I stayed at my friend Chase McQueen's house, on the couch. I have a couple friends who work in the industry and they were telling me, "If you're going to do it, you have to just do it." So I went to classes and studied a lot and I just finished my short film a couple weeks ago. I went to Savannah, Georgia and hopped in the background of Bay Watch.

[Laughs] Yes, but not really as a lifeguard. It was more just to go there. My mom did all that, so it was just cool to be a part of it.

Is she in the new one?

Yeah, she's in the new one. I don't know if I should have said that. I really haven't done anything for the public. This short will be the first thing, but really it isn't. It's not on a big scale. This is for film festivals, if it gets accepted. I think it's very good. We had a really good team and it was a really good passion project for my first thing. I got to play the lead and it was a super Chuck Bass sort of thing, like a super cool rich kid, maniacal, crazy player. You know, just a recipe for success.

That's how I really got into that. I've always kind of been into it. I've always had the book. I never really told anybody about it, I always wanted to be a stockbroker. I saw Wolf of Wall Street and I was like, "Hey!"

Do you have favorite movies that you watch over and over, when you were a kid or anything?

Fantastic Mr. Fox, he directed too, which is revolutionary. Another one of my things is, I love World War II. So Saving Private Ryan and Band of Brothers, those are my favorites Probably my favorite director has got to be Tarantino. One of my aspirations in life is to die in a Tarantino film, just because if you die in a Tarantino film, your head explodes. It's not like a death— it's an obliteration, which is so intense. The guy's a visionary, just insanely talented, same with Scorsese. Wolf of Wall Street is another one of my favorite movies.

So fucking good. Some people thought it was too much, I wished that was just part one of like a ten part mini series. I could have just sat and watched them all in a row. I know every person in it is true, and every person in it is a hideous pig of a person but I found it so incredibly well done.