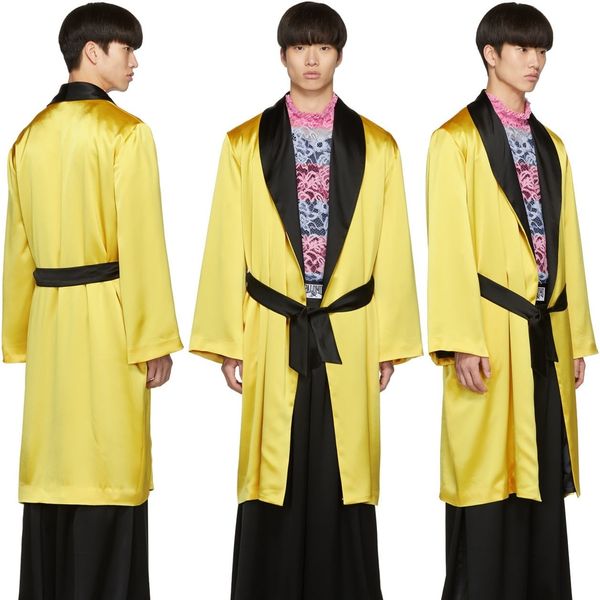 Luxury e-commerce site SSENSE has teamed up with Palomo Spain for an exclusive, eight-piece capsule collection. The pieces, which include intricate lace blouses, boxing shorts, a luxe robe, and a bomber jacket, look to be informed by a breezy sense of playfulness and sensuality. It's all very Rocky, but make it non-binary fashion.

These are hallmarks of every Palomo Spain unveiling, and an inherent tendency to upend everything we think we know about men's fashion by defying stereotypical heteronormative presentation. In an interview on the SSENSE website, the Spanish brand's designer, Alejandro Gómez Palomo, opens up about gender-free style, inspirations for each piece, and collaborating with rising artists such as Catalan flamenco-pop star, Rosalía, who often wears his free-flowing designs onstage. ("The whole show is about movement [...] she's got to be comfortable.")

Of designing without gender in mind, Palomo said that it's not a particularly intentional approach to fashion, but, rather, it is "more tied with the freedom of men being able to dress whatever way they like, in whatever clothes they want to wear. We came from a time when everything was so restricted. It's not only fashion, but in general, now we can make some sort of unblocking of this prejudice."

Of connecting with Rosalía, Palomo said she reminds him of why it's important to proudly represent Spain and its originality. "I think we come from a time in Spain where we would leave the country without really shouting where we're from," he explained. "Spanish designers go international, try to do something that looks a bit Parisian or Belgian or whatever, without really looking at what we have here and what makes us different from the rest. For me, it's very important to say, 'This is the kind of fashion that's done in Spain. This is how we understand fashion here.'"