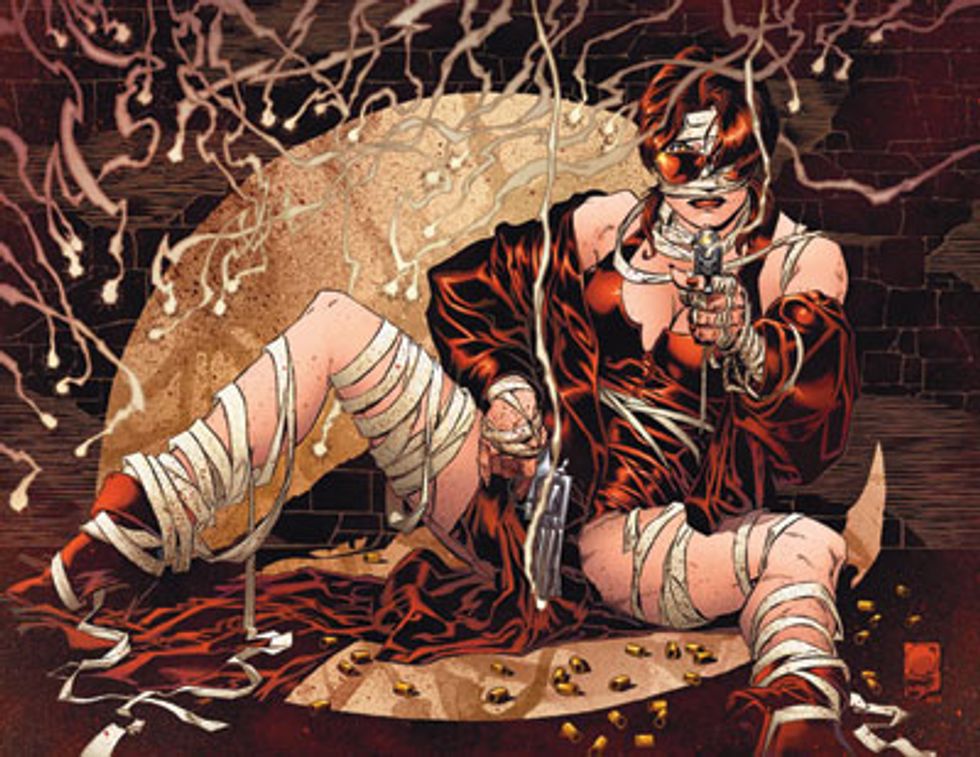 A few days ago, I got something titled "Disgruntled Communique #452" in my email box from my pal Charles Hauther, armchair anarchist and buyer for the very groovy Skylight Books in Los Feliz. Chuck's POV on this mad world is always a welcome relief and I thought I'd share his observations on the show Painkiller Jane with ya'll. (I don't know about the TV show but the comic book looks purdy darned cool! But then again, so many are... until flesh and blood actors get involved.)

ok folks,
i checked this out online and i think i may be the first person to comment on a disturbing connection between two pop culture products (because, you know, i'm so smart and all...).

there is a new show on the scifi channel called Painkiller Jane in which the entire premise (a secret agent who can't be killed due to her super healing abilities) of the show seems to be an excuse to find creative ways to physically hurt the very attractive lead actress and then portray her pain in loving detail with slow motion, clever editing, and lots of spraying blood. a sadist wetdream. i found one website that seemed to really pick up on this in its review of the show. Here's a quote:

That raises a question: why include her feeling pain in the premise? Judging from the pilot, this detailâa potential twist on the superhero plotâhas everything to do with providing a pretext for viewers to indulge in womanâs suffering of prolonged agony week after week after week. And so it proves at the end of the first episode: Jane voluntarily (even jauntily, if weâre to believe her irritating voiceover) plunged into a maelstrom of bullets, filmed in slow motion to keep the torture on-screen as long as possible, while striking model-girl poses with windblown hair, parted lips, and tight, tight clothes. The fact that she doesnât actually die does nothing to mitigate the orgiastic relish of the cameraâs unflinching gaze. Sheâs a sadistâs dream: a beautiful woman who can survive any battering and still keep her looks and her readiness to fight back, not so much female role model as high-tech Galatea.

that pretty much says it all. 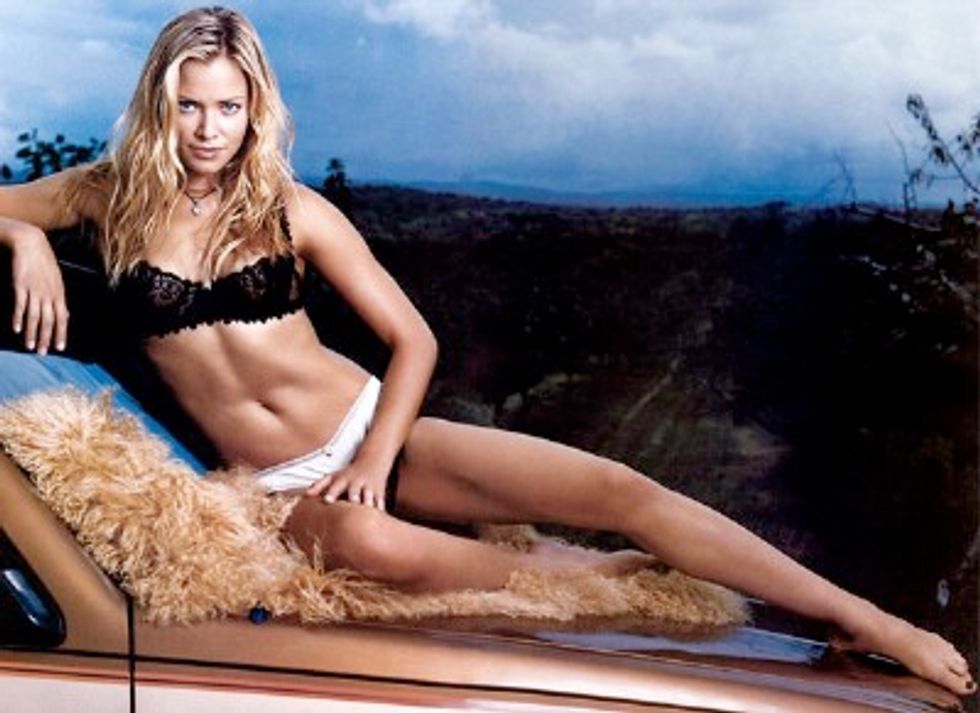 ok, but here's the kicker that is not being mentioned in the review; the actress playing Jane is the same actress who played the terminator in 'Terminator 3'! anyone remember that movie? the one where Arnold found every excuse to physically humiliate her character including shoving her head in a toilet? but apparently that was ok since her character was a 'unfeeling machine'...

the connection between the film and the tv show is what i found most creepy, because it raises questions about conscious motivation on the part of the producers of Painkiller. is it just a coincidence that they are using the same actress in another project devoted to the subtext of sadistic misogyny? that doesn't seem likely. my paranoid tendencies quickly imagine a scenario in which a group of executive suits are sitting around a table discussing what a cool idea it would be to bring back this actress for a show devoted to bashing her brains in every week. using that actress is a subtle appeal to the audience that enjoyed the misogynist violence of T3. so, that's their target demographic? yikes; the unconscious misogyny and racism in our culture is exhausting enough without having to deal with assholes like that.

have a nice day... if the apocalypse comes, beep me...

Thanks Chuck. I dunno about this sci-fi show, but I am so sick of seeing winesome young women winding up on every morgue slab on prime-time TV! This particular actress, Kristanna Loken, at least has an interesting "back story!" From Loken's Wikipedia entry:

Loken stated in an interview with Curve magazine, "I have dated and have had sex with men and women and have to say that the relationships I have had with certain women have been much more fulfilling, sexually and emotionally, than of those with certain men.... I connect with an aura, with energy. And if the person with whom I connect happens to be a female, thatâs just the way it is. Thatâs what makes my wheels turn." Loken first generated public speculation about her sexuality when she kissed P!nk at the World Music Awards in Monte Carlo. The Advocate and other LGBT news sources in November 2006 reported Loken might be in a romantic relationship with actress Michelle Rodriguez, her co-star in Bloodrayne. 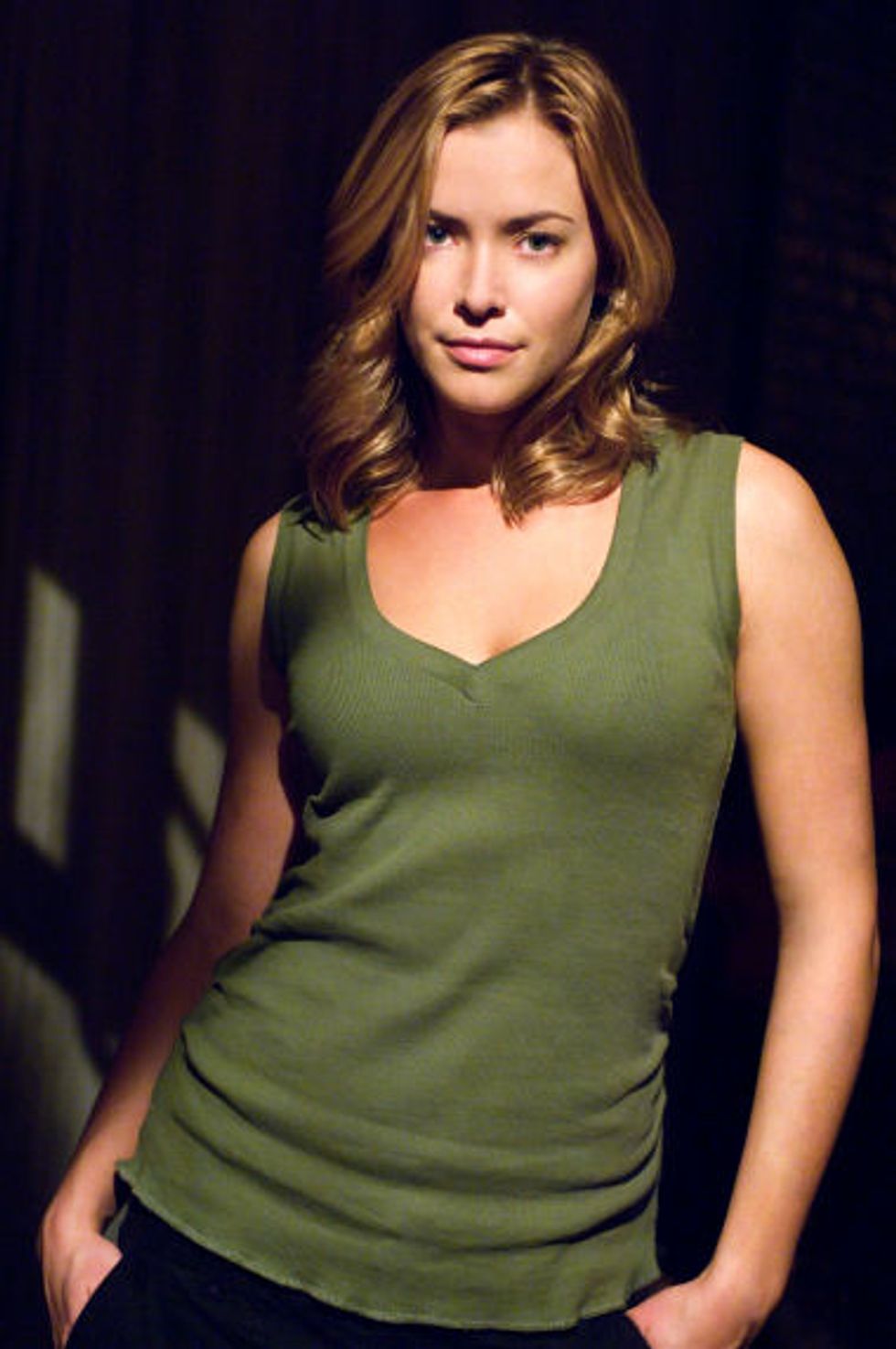 She's so pretty. Let's let her live. And act... hell, there isn't much out there for an actress that isn't mysogynistic, is there?