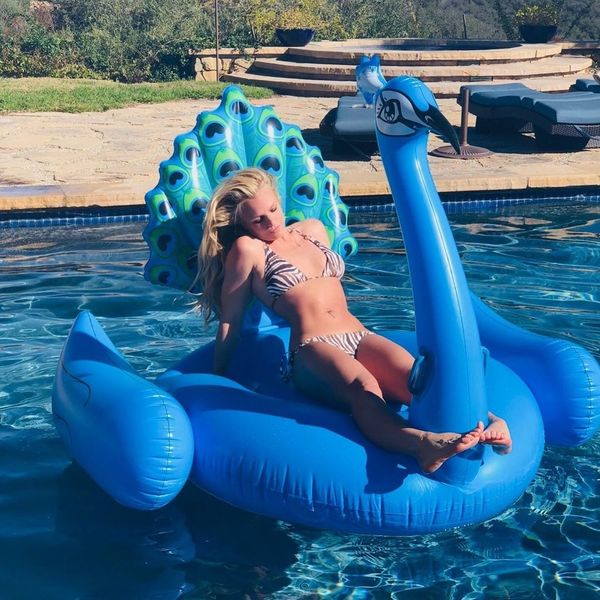 The Britney Spears mystery just gets deeper and deeper. For months, fans and the media have speculated on Britney Spears' well-being and the circumstances surrounding her ongoing conservatorship, which has been in place for more than a decade now. The heightened interest has prompted an online movement of its own, #FreeBritney, in which passionate stans plead for her release. This week, a puzzling new clue: this never-before-seen handwritten note, obtained by the Daily Mail.

The letter was reportedly written by Spears and shared within her circle during a time many consider the peak of her personal troubles, between 2008 and 2010. It was that nasty post-divorce period from Kevin Federline, culminating in psychiatric hospitalization. All of us treated the singer terribly during this time, let's be honest. Peak gross late-2000s paparazzi.

Other people keep speaking for Spears. Whether Spears wanted this letter out or not, it's worth considering how her situation would be different now if only she had been heard over the past two decades, rather than silenced. We just want what's best for Britney! Let her do exactly what she wants in 2019. She's earned it.

Here's what else happened to famous people this week.

Would You Let Diplo Livestream Your Wedding?

As we've previously discussed in detail on Page Sick, Hollywood chill couple Joe Jonas and Sophie Turner recently indulged in the well-worn celeb tradition of a messy Vegas wedding. They were in town for the Billboard Awards, and the whole thing appeared fairly spontaneous — more elaborate nuptials in France are planned for later this year. We probably wouldn't have even seen photos from the event if it hadn't been for people's reporter Diplo. Thank you, Diplo!

Or... not. It turns out Diplo was filming SANS PERMISSION, and Joe and Soph weren't as chill about it as they first appeared. While speaking on Capital Breakfast with Roman Kemp, Jonas joked that Diplo "ruined" the wedding thanks to his Instagram story, which showed the couple walking down the aisle to a live performance of Dan + Shay's "Speechless" and reciting their vows in front of an Elvis impersonator. I hate this.

Just putting this out into the universe: Diplo has permission to livestream my wedding, especially if he is the groom.

Georgia offers some of the best tax breaks for film and TV production in the US, and Hollywood has a surprisingly strong presence there. But the state recently recently joined Alabama, Mississippi, and Ohio in drastically reducing abortion access, and therefore challenging federal precedent from Roe v Wade. Now celebrities and studios are speaking out against the new laws: Netflix has declared a pro-choice stance declared a pro-choice stance, by threatening to stop filming shows like Stranger Things in Georgia if the state's proposed abortion ban comes into effect. Mainly citing the well-being of its female employees who would be forced to work for prolonged periods without access to reproductive health services.

Actors have also protested the abortion ban: "We can't imagine being elected officials who have to say to their constituents, 'I enacted a law that was so evil, it chased billions of dollars from our state's economy," reads a letter signed by Amy Schumer, Sean Penn, Gabrielle Union, Mia Farrow, and Laverne Cox. The creators of The Handmaid's Tale have announced they won't film in the state, as have Kristen Wiig and Annie Mumolo, the writing team behind Bridesmaids. Ilana Glazer announced that she moved the filming location for her forthcoming movie, too! It's cool to see.

How many wigs do you think Paris Hilton owns? A reasonable guess, taking her wealth, fashion sense, and traveling DJ career into account: 100. I'd go with 100. Multiply that number by eight, and you've got the real figure. It turns out she uses them to avoid paparazzi.

While chatting about this latest app venture with ET, Hilton revealed that she owns a staggering amount of hair pieces. "I have every single color, every style," she said. "I used to wear them to Disneyland and other places. If I'm ever in a certain country or I want to just like, go undercover, I'll just put on like, a short black wig and just go undercover and be in disguise." Eternal icon.

Remember When Ashton Kutcher's Girlfriend Was Killed on Grammys Night?

You probably don't — this was back in 2001, and it's an awful story. 22-year-old Ashley Ellerin was stabbed to death 47 times by a then-unknown perpetrator. Just hours before, she'd supposedly had a date with Kutcher to the official Grammy ceremony after party — the actor had arrived to pick her up then bounced when she didn't answer the door. Ellerin's body was later discovered by a roommate.

Ellerin's tragic death remained a mystery for years, but the case has now gone to trial. This week Kutcher presented as a witness against Michael Gargiulo, an air conditioning repairman who was apprehended in 2008 and is accused of murdering three young women over a 15-year period.

Tangential, but I miss That 70s Show.

Would you want to hang out with Donald Trump immediately after giving birth to a highly anticipated royal baby? Meghan Markle, covertly woke British aristocrat, would understandably not. She will politely sit the hell out of Trump's upcoming UK visit, which will probably annoy him so much, as a notorious lover of celebrity ops. Donald Trump is set to visit Buckingham palace next week, in a twisted recreation of Billy Bob Thornton's visit to London in Love Actually.

Markle hasn't made any official statement about why she's sitting out the meeting, and she's not allowed to express political views as a royal family member. Before she married Harry, though, she was openly critical of the president on a number of occasions. This is why Bey and Jay stan.

Keanu Reeves Is Single and Looking

Keanu is back with another John Wick movie, and the publicity cycle has been a total delight. This man... he gives and he gives. Not a single boring interview during his decades in the biz. On that note, Reeves got unusually candid about his personal life during a recent press conference in New York.

In addition to chatting about not going out much and being boring, Reeves also touched on feeling a bit "like an animal in a cage" while living in LA. When asked what love means to him, Reeves responded by saying, "I'm a lonely guy. I don't have anyone in my life." However, he followed up quickly by saying that if it does happen, "I would respect and love the other person. Hopefully it'll happen for me." Women of LA, step up your game.

Bonus round: Will we get a Sansa/Arya GoT spin-off? Lil Nas X is getting that movie money. Jeff Goldblum is pivoting to beauty influencing. Tiffany Haddish opened up about her difficult childhood. Ariana Grande has an appropriately cute allergy problem. Kanye West talked Trump with Letterman.