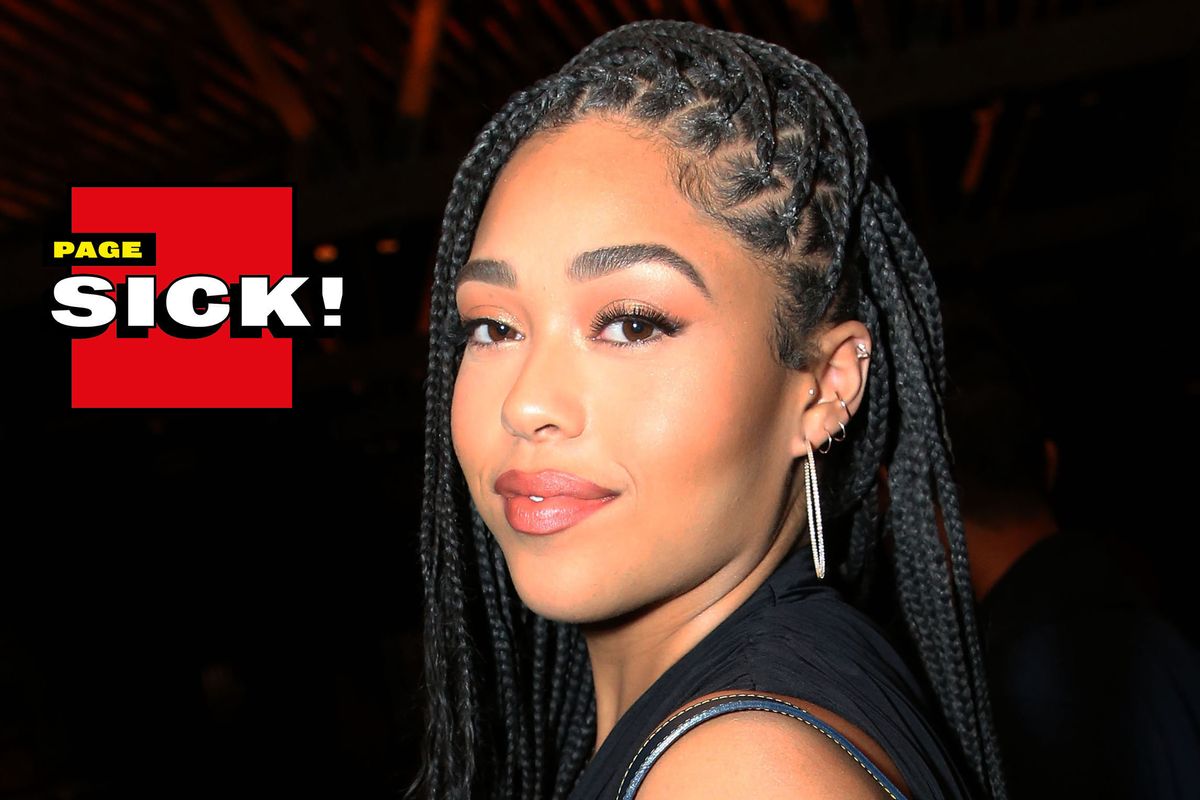 Page Sick: The Truth About Jordyn Woods and Khloé Kardashian

There's no escape from the Khloé Kardashian-Tristan Thompson-Jordyn Woods cheating controversy, and do you really want there to be? It's a nice distraction! I think we can all admit that rich people problems are okay to laugh at, right now, at this historical juncture. Like, you can watch the presidential debates and refresh People at the same time. It's not illegal.

So let's dive in. Apart from a sympathetic Red Table Talk interview (thank you, Jada), we've heard more from Khloé than we have Jordyn and Tristan about the scandal, and the Kardashians have been able to gain the upper hand fairly quickly. Keeping Up is about to air its season finale, and you can bet it will paint Khloé in a sympathetic light — and demonize Woods as a homewrecker/traitor to Calabasas.

But there might be more to it than that. For example, did you know that Kardashian and Thompson had technically already ended things when he and Woods hooked up? Numerous outlets reported as much this week: Tristan and Khloé, who share a daughter, True, "weren't in a proper relationship" when the scandal broke. This is pretty believable — Thompson famously cheated on Kardashian right before she gave birth, and in general has shown himself to be a fairly reprehensible boyfriend. (More on that: Thompson was allegedly still dating his previous girlfriend Jordan Craig when he met Kardashian. Also, Craig was heavily pregnant with his son.)

This has, in retrospect, been obvious all along: why would Thompson host a house party that his girlfriend wasn't invited to? The two had clearly gone their separate ways. Although yeah, I hear you — it's still pretty shady that Woods, a longtime Kardashian family friend, would attend the house party of Khloé's ex without her present. Let alone kiss him in front of everybody.

The bigger takeaway is that we're just not getting the full story. Do you really trust this diabolical family of beautiful, devious, and incredibly fertile sisters to tell the whole truth, especially if reality is less made-for-TV than fiction? Of course you don't! But this is just a reminder.

Here's what else happened to famous people this week.

Although he's been in and out of the spotlight for years, A.Rod is relatively new to the Hollywood A-list: getting engaged to Jennifer Lopez has its perks. Unfortunately, it also has downsides — press scrutiny, which requires a whole lot of media training. A.Rod didn't do his, and has now paid the price.

The former baseball player gave an extremely fun and candid interview to Sports Illustrated in which he divulged a little too much about his evening at the Met Gala, where he was seated next to Kylie Jenner (also Donatella Versace, who he referred to as "a famous singer.") So what did they all talk about?

OMG that’s right @KylieJenner!! It was me talking about you and your makeup line and how much my girls love you.… https://t.co/UbagsncfKO
— Alex Rodriguez (@Alex Rodriguez)1561510590.0

Um, it depends who you ask. Either bravely or naively, Rodriguez dared suggest to Sports Illustrated that Jenner spent the evening gassing herself up: "Kylie was talking about Instagram and her lipstick, and how rich she is." Jenner predictably isn't having it. In a characteristic lower case tweet, the beauty billionaire issued a correction. Appearing terrified, A.Rod suddenly remembered things differently.

Bella Thorne Reacted to the YouTube Wedding of the Century

Jake Paul proposed to fellow YouTuber Tana Mongeau over the weekend, while the couple celebrated Mongeau's 21st birthday in the club. She said yes! They've only been dating for three months, and as many followers pointed out, the whole thing reeked of a social media stunt designed to increase, uh, the other kind of engagement. At least one person is taking it seriously, though: Bella Thorne, Mongeau's most recent ex. Thorne, known for her confessional Instagram presence, posted a tearful selfie on her finsta after hearing the news. Caption: "When ur ex gets engaged."

Mongeau (kind of coldly?) responded in the comments section with an "omg." Then Thorne posted a screenshot of Instagram offering her mental health support. But everything seems chill now — Thorne later tweeted a strong feminist statement about how Mongeau should ask Paul for a pre-nup, not the other way around. They'll be okay. Sadly no one is asking or answering the more important questions: Will Logan be best man at the wedding, and will it be live streamed?

Taylor Swift has a new cat called Benjamin Button, because of course she does. She's also trademarking him, to make more merch money. Her two other fur babies — Meredith Grey and Olivia Benson — are already trademarked and have had merchandise releases, but, obviously, Swift couldn't leave her the latest addition to her Manhattan penthouse menagerie out of the family business.

Goals for the rest of us crazy cat ladies out there.

For a few candy pink hours on Twitter this week, it was the mid-2000s again. A verified account for erstwhile Paris Hilton/Nicole Richie vehicle The Simple Life posted a series of tweets suggesting that the show, like The Hills and Juicy Couture velour, would be making a comeback. Alas, Twitter quickly took away the blue checkmark, and the reboot was revealed by Hilton herself as too good to be true.

Why was this hoax so believable? Well, Lohan is available for work. MTV just canceled Lohan's Beach Club, and she's reportedly working on new music. A rekindled friendship with her old nightclub sidekick Paris would be a savvy publicity move. The project would make less sense for Hilton — as she declared on Twitter, she's busy being a "Girl Boss" these days. Nicole Richie, meanwhile, as gone from strength to strength since she and Paris ended their friendship and show: marrying a Madden brother, pivoting to fashion design, and starring in the extremely underrated and self aware VH1 series Candidly Nicole.

Bonus round: The Hills: New Beginnings is finally here! The BET Awards ruled this year. Michael Jackson died ten years ago this week. Did you get fired by Beyoncé? Justin and Hailey really were meant to be.