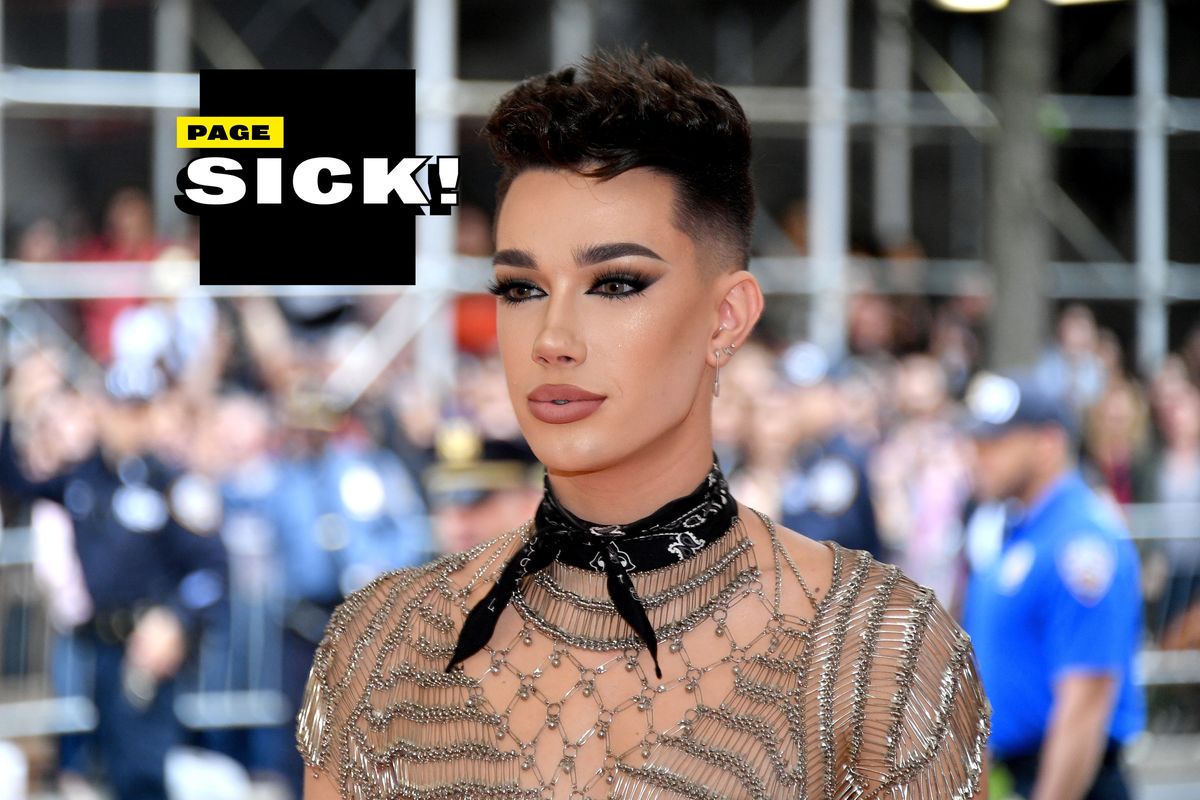 Each Friday, Page Sick looks back on a week of ridiculous Hollywood headlines that we couldn't help but click on. If celebrity obsession is sick... put us in the hospital. We're unwell.

There's something delicious about an influencer getting canceled. We saw it with former fake USC student Olivia Jade earlier this year, and now the schadenfreude comes courtesy of beauty guru and Coverboy James Charles. You might know him as the guy who used a ring light to shoot his graduation photos, or as a passionate proponent of assless chaps. More recently, he attended the Met Gala and took the opportunity to lobby for more "representation" of influencers in "the media."

Over the weekend, Charles actually found himself extremely represented by multiple outlets. Even the New York Times was reporting on the animosity between him and vlogging mentor Tati Westbrook after the latter posted an extraordinary video in which she publicly ends their friendship and accuses him of selfish behavior. "There's so much going on with James Charles right now that I do not support, that I do not agree with," she explains in the vlog. "Fame, power and a fat bank account will change almost anyone. If you don't have people that will tell you to your face that you are doing the wrong things, you will change... I don't think there's any getting through to you and I don't want to be friends with you, I don't want to be associated with you and I need to say that very publicly so that chapter can be closed."

This whole thing started in the most influencer way possible: Tati got mad about Charles doing sponcon for a vitamin company that's a direct competitor to hers. But there's also so, so much more to it. More than you — more than anyone — would think. Ultimately everyone has taken Tati's side, and Charles has lost literally millions of followers, including some big name celebrities.

How many times have you watched the apology video? I personally have hit double digits.

Tati has since posted a follow-up video asking people to chill out, but how can we possibly? Here's what else happened to famous people this week.

There Was Secret "Queer Eye" Drama!

The whole reason Netflix's rebooted Queer Eye works so well is the impeccable casting. The Fab Five have such natural chemistry, and on screen treat each other with kindness and respect. The friendships seem genuine, sincere, deep. But that's just the magic of reality TV production, baby! It turns out that Antoni and Karamo weren't even on speaking terms while season one was filming.

The two are supposedly friends now, if the first episode of Karamo's new podcast can be believed. He claims a mysterious "third party" got involved and conspired to make them enemies. Okay, but what if it was Bobby? A twist.

A busy week for Kardashians, as always. We learned that Kylie Jenner is expanding her beauty empire beyond makeup into skincare, and possibly the hair styling space. North West signaled possible future musical ambitions by getting in on the "Old Town Road" trend. And her mom Kim Kardashian lit the internet on fire with a single emoji, while also using her fifth wedding anniversary with Kanye as a savvy marketing opportunity.

Celebrity hairstylist Jordan Blackmore (clients: Marc Jacobs, Elizabeth Olsen, Selena Gomez) alleges he fell victim to a scamming wannabe bride. He's filed a lawsuit against his former fiancee, alleging that she planned their entire elaborate wedding ceremony as a PR stunt to get attention. They've since broken up, and the ceremony turned out not to be legally valid. He's seeking $2 million in damages.

The wedding does sound worth scamming for. It reportedly cost in the realm of $1 million, and included horseback riding, zip lining, hiking, yoga, watercolor classes, karaoke, a BBQ and s'more buffet, lunching by the pool and "movies under the stars." Additionally, the "happy" couple apparently had the guests flown in on private jets and put up in the expensive Amanigiri Resort, where suites cost up to $4350 a night. All the insane details here.

"Game of Thrones" Sucked to Film

Arya Stark has joined Sansa in admitting that becoming an HBO celebrity isn't all it's cracked up to be. Like Sophie Turner, Maisie Williams has admitted to the press that she suffered mental health issues while the show was filming.

Turner mused on the same topic last month during an interview with Dr. Phil. We're excited to see what both of them do next!

Bonus round: Miley on Black Mirror. Whoopi Goldberg, eternal style icon. Why RuPaul didn't do the Met Gala in drag. How to run a Jonas Brothers fan Tumblr for 10 years. Ezra Miller's band!