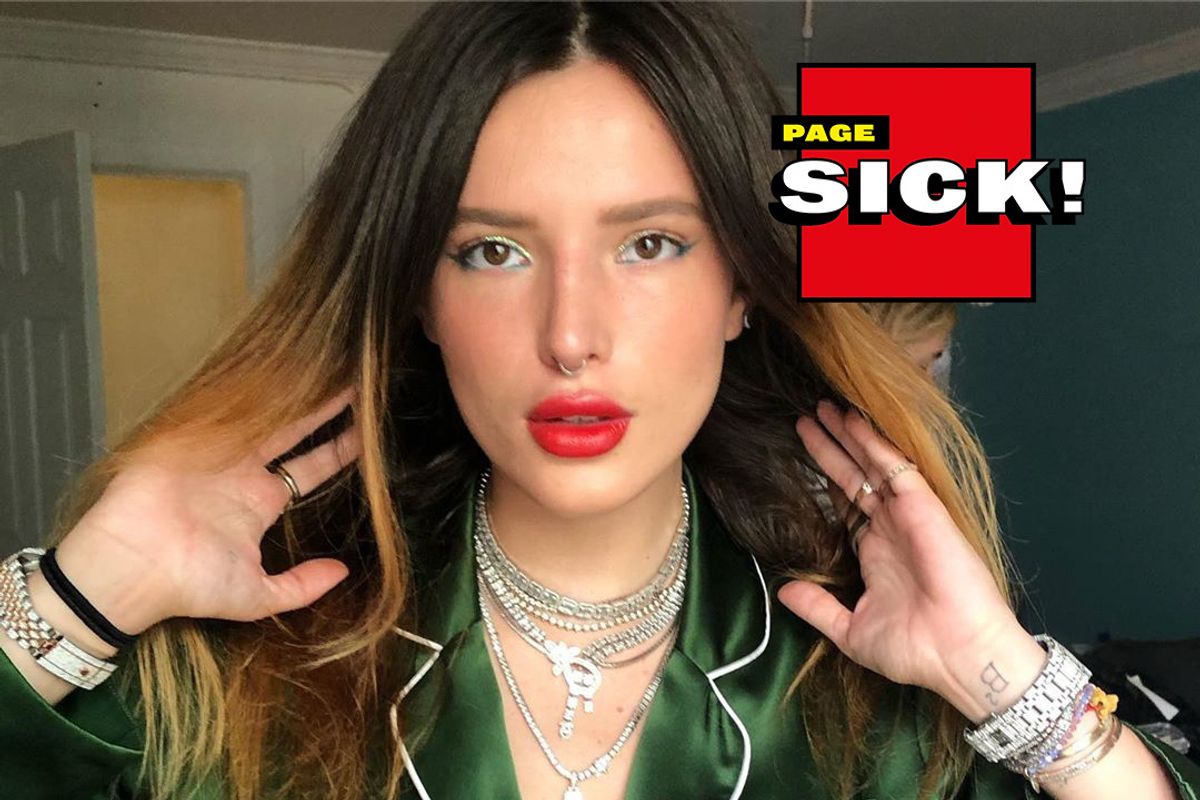 It's annoying when famous people complain about fame. It just is! There's nothing worse than someone unfathomably rich, powerful, and good looking going off in an interview about how much they hate the paparazzi. But there are some nastier aspects of celebrity that no one deserves or asks for, no matter how hungry for box office dollars or Billboard numbers they happen to be, and the nude photo leak is top of the list.

Being a woman in the public eye means constant scrutiny, and the threat of hackers makes that experience all the more terrifying. Jennifer Lawrence knows it, as do numerous others. Actress, model, and wannabe mogul Bella Thorne added a new twist to the narrative this week when she leaked her own nudes, getting ahead of someone who'd cracked into her cloud and threatened to release them.

"For the last 24 hours, I have been threatened with my own nudes," she explained in a lengthy note posted to social media. "I feel gross, I feel watched, I feel someone has taken something from me that I only wanted one special person to see. He has sent me multiple nude photos of other celebs, he won't stop with me or them, he'll just keep going."

But instead of succumbing, Thorne thought back by posting the images herself on Twitter. "So here fuck u, for the last 24 hours I've been crying instead of celebrating my book while doing my book press," she said. "Oh yea, the fbi will be at your house, shortly, so watch. Your. Mother. Fuckin. Back."

The moment was ruined somewhat by Whoopi Goldberg shaming Thorne on The View, but you can bet the younger actress had a sharp comeback for that, too.

A big week! Be careful with the cloud. Here's what else happened in Hollywood.

Bella's not the only star who is tired of rumors starting, sick of being followed. Lindsay Lohan is reportedly furious after (correct) reports emerged about the shuttering of her Mykonos-based beach club, the setting of MTV's incredibly frustrating reality show. The venue has reportedly closed after less than a year serving drinks to C-list foreign DJs. Lohan's Beach Club, which premiered earlier this year, will not film a second season. According to Page Six, the club had advertised that it would stay open this summer, but is now canceling all future reservations. The location is now "deserted," with the Lohan sign "stripped off." RIP.

But! There's a silver lining. LiLo is pivoting back to music, and has reportedly signed a deal with Universal's Casablanca Records, which is huge. Casablanca is her old label — they put out Speak and A Little More Personal (Raw) in the mid-noughts. Two tween classics. Drop the new shit ASAP, Linds.

Here's an argument for using that close friends-only feature: Bella Hadid accidentally insulted the entire Middle East by photographing her chic pointed boots with some Saudi Arabian planes in the background. She was likely just posting one of those I'm-bored-at-the-airport IG stories we've all been guilty of sharing at the departure gate, but unfortunately many Twitter users called out the photo as disrespectful.

According to E! News, some felt the photo made it look like "she was kicking planes that had the UAE and Saudi flag on them." Earlier in the day Hadid had posted a screenshot of a New York Times opinion piece called "The Princes Who Want to Destroy Any Hope for Arab Democracy," which fueled the social media fire.#BellaHadidIsRacist started trending, and Hadid, who is half-Palestinian, issued an apology.

Unfortunately, this is not the first time a Hadid has been called out for racism.

Much to report from Calabasas. First, Kendall Jenner was blasted by @DietPrada for allegedly posting some subtle Coca Cola sponcon on her grid. Depending on how cynical you are about corporate America, Jenner either happened to match her tangerine colored dress to the Coke can she was carrying, or was paid to. Either way she did, unfortunately, look great.

We also heard some intriguing Kourt and Scott news: the on-off couple are vacationing together with their kids, minus Scott's rumored fiance Sophia Richie. What does it mean? Hmmmm.

Taylor Swift is back, baby. Welcome to the Lover era, which turns out to be… very much about literal love and forgiveness. Of Katy Perry, specifically, although definitely not toothless redneck homophobes holding signs. That's the message of Swift's new video for "You Need to Calm Down," anyway.

Yes, it's true: Perry and Swift have, after months of hinting, totally buried the hatchet. Calvin Harris approves! There was an olive branch, there were cookies, and finally the warring popstars hugged while wearing McDonald's costumes — in the grand scheme of 2019, this didn't seem as weird as it maybe should have. Actually, come to think of it, was the whole clip just Kendall-style sponcon for fast food? The pro-LGBTQ message was probably just a ruse.

Bonus round: Rihanna got day drunk with Seth Meyers and it was honestly kind of awkward? Tan France got in bed with Pete Davidson. Britney Spears' mom had some things to say. The leader of Smallville's favorite sex cult NXIVM was convicted.