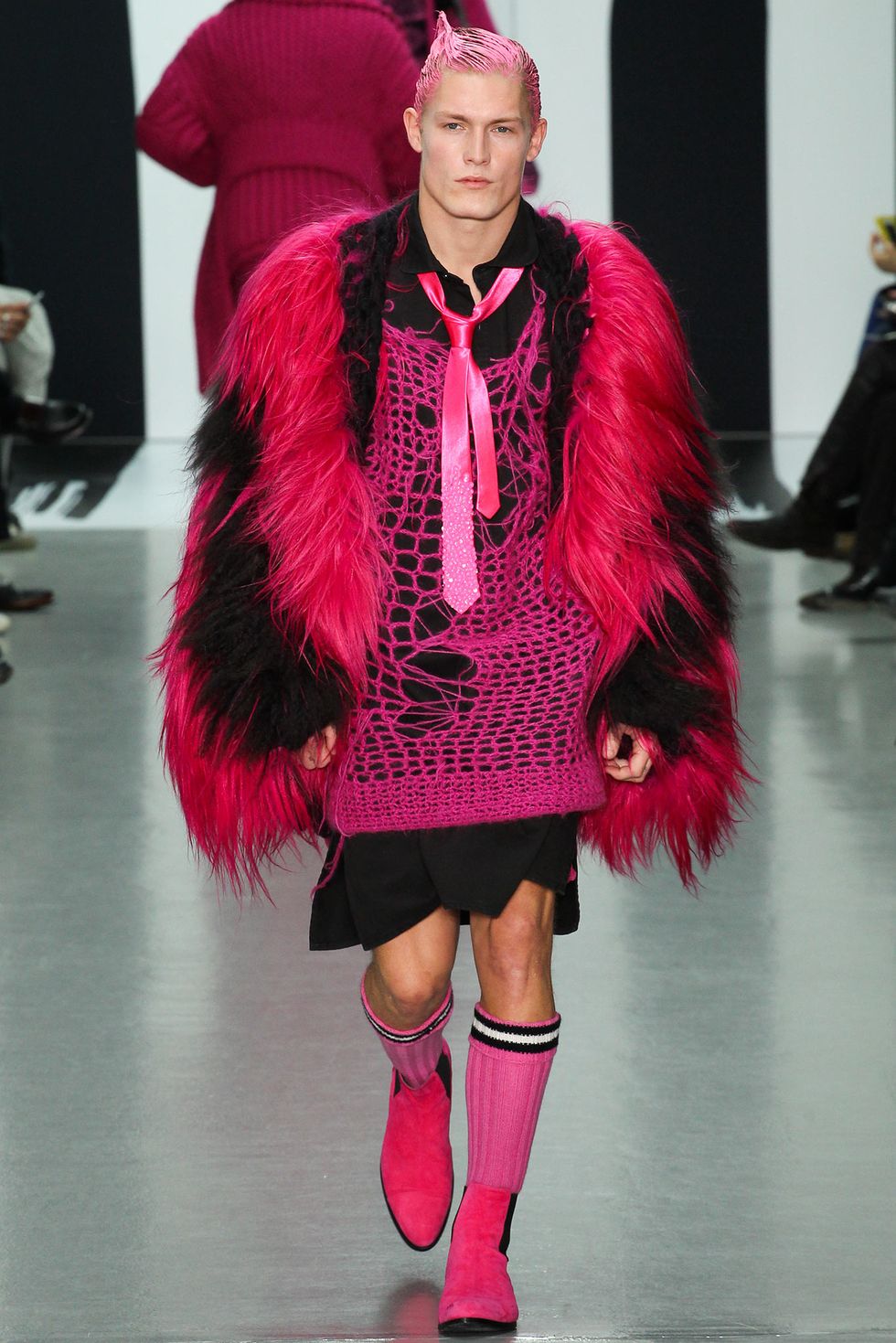 With conservative, aristocratic heritage labels sharing the runways with designs reflecting the city's long list of rebellious subcultures, men's fashion in London is a delightful paradox. This juxtaposition has become a defining trait of the London Men's Collections and has created a vibrantly diverse atmosphere both on and off the catwalk. Support from Topman, the British Fashion Council, and various yearly sponsors has also allowed for free flowing creativity at London Men's Fashion Week, but out of all the collections there's 5 designers who out-shined the rest. Here's why Sibling, Agi and Sam, Christopher Shannon, KTZ, and Katie Eary created our favorite collections at London Men's Fashion Week.

via Style.com
Sibling's collection was an ode to rebellious schoolboys with chaps dressed in pinstriped uniforms, cardigans, loose ties, dramatically decorated lapels and suits all awash in an acid bubblegum pink. The models, some toting giant stuffed bears, strode down the catwalk as if they were ten minutes late for class in some alternate reality.

via Style.com
Agi and Sam also presented a collection that looked like a regression to childhood. Amazing color blocking on coats and jackets that seemed to be deconstructed and reassembled with child-like innovation and imagination were echoed by Lego face-masks that enhanced and altered the appearances of the models.

via Style.com
Christopher Shannon created a collection that was political yet humorous with tongue-in-cheek slogans such as "broke," "thanks 4 nothing," and "save me" popping up on his knitwear. The artfully executed looks -- which included plastic bags as head coverings -- all suggested a sense of economic strain without getting bogged down in its own statement.

via Style.com
KTZ did not disappoint their massive cult following. Designer Marjan Pejoski referenced a list of noir inspirations like A Clockwork Orange and expertly utilized black rubber and leather to convey the show's dark themes. From outerwear featuring images of communist leaders to Inuit inspired jackets and Rubik's cube tiled bombers, the collection showcased a diverse range of pieces and various takes on Alex's iconic uniform in A Clockwork Orange.

via Style.com
Katie Eary's obsession with pop-art could be found in her references to shocking anatomical paintings from Jennifer Saville, sculptural cartoon-like designs from KAWS, and colorful surface palettes from Jeff Koons. Anatomical detailing that had a caricature feel enhanced the intense hues of the pants and outerwear. Shirts and knitwear even featured brains, ribcages, and teeth.
You May Also Like
Fashion