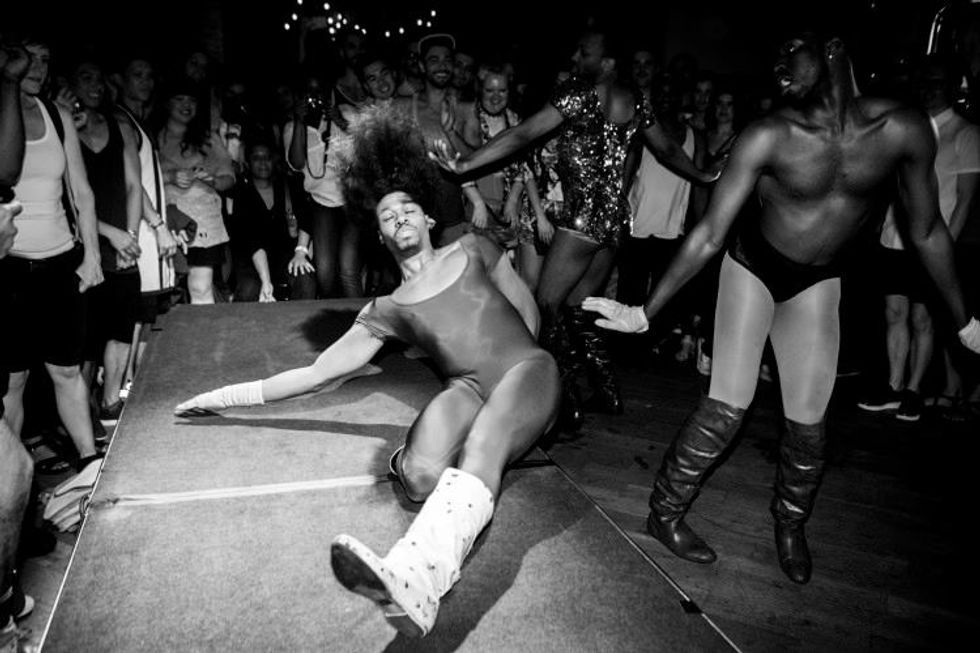 Our Guide to the Best Pride Weekend Events In NYC

by Taylor Silver + Suzannah Weiss
PAPERMAG
GIF by Austin Moore
In Pride Week's spirit of inclusion, there's something for everyone this weekend, whether you're into dance parties, films, drag shows, art installations, or even Tarot cards. Read on for recommendations of where to celebrate LGBT pride in NYC and kick off summer.

Photo via Duh NYC
Duh Pride Kickoff
Get Pride Weekend off to a raucous start at Duh, which will be featuring live performances by rapper and M.I.A. protegÃ©e Rye Rye, and music by resident DJ Mazurbate, HD, and Chapman. Oh -- and don't forget to indulge in a cotton candy machine and Svedka open bar.
Up&Down, 244 W. 14th St., 11 p.m.

Fire in the Hole
The East Village's Nowhere bar hosts "Fire in the Hole," a monthly event in honor of redheads and their supporters. They have $3 whiskey gingers because, obviously.
Nowhere, 322 E. 14th St., 9 p.m.

Everybooty
This dance club-meets-art gallery-meets-drag show at BAM Fisher boasts four floors and a rooftop for getting your groove on to DJs Sean B, Matty Beats, and Deputy, checking out video and art installations, and catching performances by Will Sheridan, Mizz June, The Feath3r Theory, Turnt Up Trifecta, and I Am A Boys Choir. And if that's not enough, rumor has it there'll be karaoke and Tarot readings for those tired out from all the week's dancing.
BAM Fisher, 321 Ashland Pl., Brooklyn, 8 p.m.

The Rally
Since its start in 1969 after the Stonewall Riots, The Rally has served as NYC Pride Weekend's ultimate kick-off event. The free, all-ages gathering will be held on Pier 26 in Tribeca and includes a special performance by Ashanti. Make sure to, uh, be "on time." Hudson River Park Pier 26, 7 p.m.

Fantasy
If you're still raring to go post-Rally, head to "Fantasy", a burlesque masquerade party at The Diamond Horseshoe. You'll be able to purchase masks at the door should you forget yours at home.
The Diamond Horseshoe, 235 W. 46th St., 10 p.m-5 a.m.

Photo via Paris is Burning
Celebrate Brooklyn!: Paris Is Burning
Celebrate Brooklyn! is holding a free outdoor screening of the 1990 documentary/bible Paris Is Burning, featuring an introduction by its director, Jennie Livingston. What's more, there'll also be a ball performance with members from House of Xtravaganza. Start perfecting your duckwalk now.
Prospect Park West at 9th St., 7:30-10:30 p.m.

OASIS
Queer art collectives The Culture Whore and Factory Girls have joined forces to create OASIS, an eight-hour melding of art and music from the most talented voices in the Philly, Baltimore, and New York areas. The Bushwick event will feature music by JX Cannon and J Lamar, as well as Philly's Gun$ Garcia and Yolo Ono.
43 Scott Ave., Brooklyn, 11 p.m.-7 a.m.

Photo via WE Party
WE Party
If you never finished your Bachelor's, WE Party's "University"-themed event seems like the next best thing. Held in Manhattan's Hammerstein Ballroom, DJs Sagi Kariv and Micky Friedmann will be spinning 'till 6 a.m. So get your tickets and avoid making out with any underage co-eds.
The Hammerstein Ballroom, 311 W. 34th St., 10 p.m.-6 a.m.

Photo via Pride Ball
Pride Ball
In addition to the Hump! Film Festival, Wythe Hotel will be co-hosting, along with Gayletter, their annual Pride Ball. There will be special performances by House of Mugler, House of Labeija, and queer Brookly-based rapper Jay Boogie. A portion of the night's ticket sales will go toward Fierce, a charity supporting LGBT+ youth of color in New York City.
Wythe Hotel, 80 Wythe Ave., Brooklyn, 7 p.m.-1 a.m.

Pride Parade
Get your lamÃ© hotpants ready for the big kahuna of Pride Weekend -- the parade -- which kicks off at 36th and Fifth and finishes its route on Christopher and Greenwich Sts. This year's Grand Marshals include actors Sir Ian McKellen and Sir Derek Jacobi, Ugandan LGBT rights activist Kasha Jacqueline Nabagesera, and Brooklyn-based activist J. Christopher Neal. Keep an eye out for PAPER's own Mr. Mickey who will be riding Diesel's LOVE float this year alongside vogue dancers sporting the brand's new, uh, package-enhancing Hero Fit briefs.

Dance on the Pier
This Pride Weekend staple has hosted the likes of Cher, Demi Lovato, and Cyndi Lauper and this year it's Ariana Grande who's nabbed the headlining slot. Feel free to wear all the glitter your body can absorb and dance it all off during "One Last Time" for a good cause.
Hudson River Park Pier 26, 3-10 p.m.

Pride at the Bell House
The tagline for the Bell House's annual Pride comedy event is "What if 'A Prairie Home Companion' were hosted by four Mirandas?" Comedians John Early and Cole Escola, along with author Isaac Oliver and "drag rapper" Hamm Samwich will co-host the event, with its profits going to SAGE benefiting LGBT elders. Special guests include Girls' Jemima Kirke, SNL's Sasheer Zamata, and comedian Julie Klausner.
The Bell House, 149 7th St., Brooklyn, 8 p.m.

Photo courtesy of Diesel
Westgay
End Pride Weekend with a bang at Frankie Sharp's LAST-EVER Westgay before Westway shuts its doors for good. The last hurrah is being sponsored by Diesel and will feature a live performance by Foxy Brown and sets by DJs Juliana Huxtable, Joey Labeija, and Cazwell.
The Westway, 75 Clarkson St., 10 p.m.; 21+; Tickets are $25 and can be purchased HERE