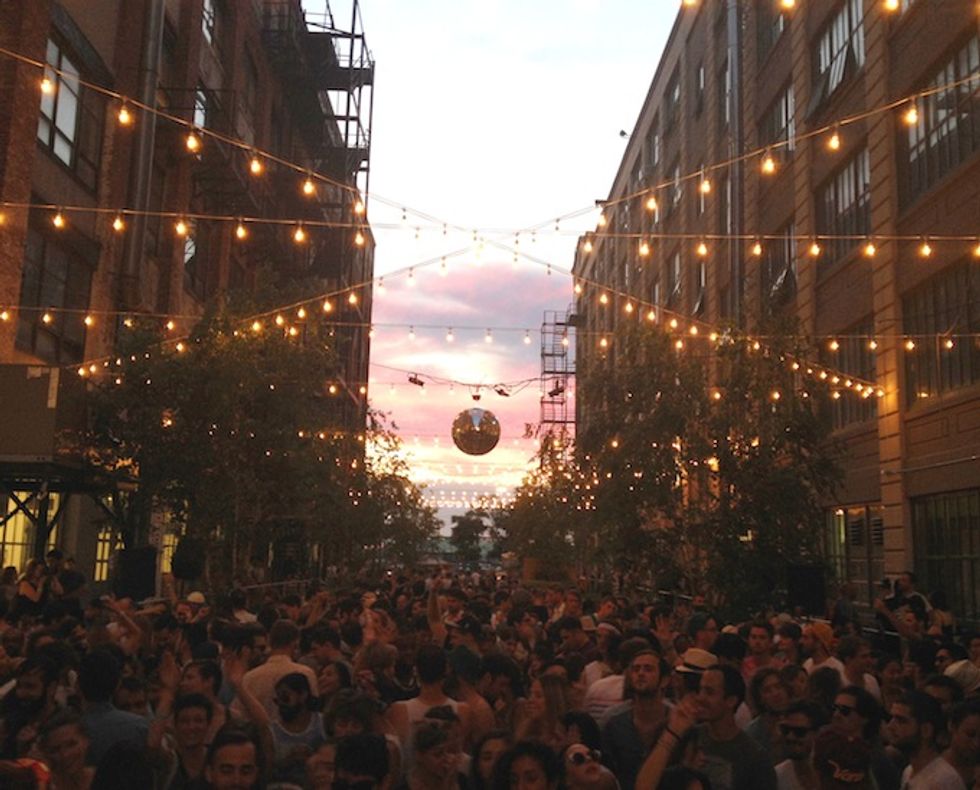 Our Guide to the Best July 4th Weekend Events In NYC

by Juliette Kang + Victoria Lin
PAPERMAG
GIF by Juliette Kang
Whether you're stuck in the city or looking for a last-minute (or 24-hour) escape, here's our picks for the best parties, comedy shows, film screenings and more going on in NYC over the July 4th weekend.

Rob Stapleton's July 4th Weekend Takeover
If fireworks aren't really your thing, or if you want to kick off the festivities early, comedian Rob Stapleton, who's been featured on Comedy Central and Russell Simmons Def Comedy jam, has your back. Settle in for an evening of Independence Day-themed stand-up from the Bronx's best.
Carolines on Broadway, 1626 Broadway, NY, 10:30pm.

Photo via Pub Crawl
Red, White and Brew Pub Craw
All who think the true purpose of the Fourth of July is to be able to day-drink without being judged -- this one's for you. This three-day boozing extravaganza isn't for the faint of heart, but for a mere $10 you can spend Independence Weekend stumbling through NYC's pubs with a bunch of people who are just as smashed as you are. For those whose livers aren't quite up to the enormity of such a challenge, July 4 day passes are also available for $3.99.
Bar None, 98 3rd Ave, NY, 5pm.

Photo via BABÃ�L
BABÃ�L Presents Sun Scream
If  you're trying to escape the hectic city this holiday, head out for a nice weekend trip to Montauk, where BABÃ�L will be hosting their first-annual beachside fÃªte at the recently transformed Gurney's Montauk Resort & Seawater Spa. With headliner Israeli techno/house DJ Guy Gerber and DJs Orazio Rispo and Behrouz, this pre-Independence Day turn up will give you an energetic start to your long weekend celebrations.
290 Old Montauk Hwy, Montauk, NY 11954.

Photo via Mixpak
Tryna Function x Mixpak
The party series Tryna Function and Brooklyn-based record label, Mixpak, have come together for an after-hours celebration. With sets from house/club DJs Eclair Fifi, DJ Tameil, Jubilee, Nick Hook, Dre Skull and more, you can dance from 10:00pm to 4:00am and drag out Independence Day for as long as possible.
TRANS-PECOS, 915 Wyckoff Avenue, NY, 10 pm.

Bushwick A/V & Soup NYC Independence Day Marathon
Bushwick A/V & Soup NYC is hosting an Independence Day Marathon, a 24-hour celebration from Saturday, 4am to Sunday 4am. Featuring 20 artists, including DJ Spider, Cocoon Recordings' Simon Wish and New York's finest local DJs, this rooftop dance party will be powered on a Subbass Sound System and is going to have some A+ BBQ, two stages and a gorgeous view of the fireworks.
R.S.V.P by emailing somewhereinbushwick@gmail.com for the secret location and details.

The Cityfox Experience: July 4 at Brooklyn Mirage
This July 4th doesn't just mark the birthday of our country, but also the debut of new outdoor/indoor, day/night event space in East Williamsburg, The Brooklyn Mirage. To kick off the space's grand opening, the party collective Cityfox will be taking over for an Independence Day celebration featuring two Berlin electronic duos, (Tale of Us and M.A.N.D.Y), fine wine and dine, an awesome view of Brooklyn and no people under the age of 21.
East Williamsburg, Brooklyn, New York 11237, 2pm.

Photo via The PIT
IndieFest 2015â�¨
The folks over at the Peoples Improv Theater are bringing together underground acts from all over the country for a day of back-to-back shows and potluck BBQ, so you can see all the improv you've ever wanted for twelve straight hours.â�¨
The PIT, 123 E 24th St, NY, 12pm.

Photo via Might Get Weird
Might Get Weird: 4th of July 2015â�¨
Head to Bed-Stuy for cheap eats/drinks, music from Brooklyn DJ collective The Deep, and a "surprise" from performance artist and self-declared village idiot Matthew Silver. Trust us -- you'll need the buzz to brave the crowds at the fireworks show later.â�¨
Sugar Hill Disco & Restaurant, 609 DeKalb Ave, NY, 12pm.

Nathan's Hot Dog Eating Contest
There's no way to talk about Independence Day in New York without mentioning that pinnacle of American patriotism, the true foundation on which our country stands: the annual hot dog eating contest hosted by Nathan's Famous. Will someone finally break American Joey Chestnut's 8-year winning streak (his record stands at 69 hot dogs in 10 minutes)? Gird your loins -- er, stomach -- and trek out to Coney Island to find out.â�¨
1310 Surf Ave, Brooklyn, 10am.

Photo via South Street Seaport
Festival of Independenceâ�¨
For a little more family-friendly action, check out the all-day street fest over on South Street Seaport. The drinks flow aplenty, but there's also food stalls, shopping, three stages of live music, and a beautiful waterfront view -- and with the East River skyline visible from Fulton St and Peck Slip, you don't even have to leave to get your Macy's fireworks fix.â�¨
South Street Seaport, 199 Water St, NY, 1pm

Photo via LIC Flea & Food
LIC Flea 4th of July Night Marketâ�¨
You'll find a decent fireworks view without the mad crush of people at LIC Flea's first-ever night market (technically an all-day market -- it starts during the day but is open through 10:30pm). During the day, the market is known to be heavier on food and drink than flea treasures, with a healthy selection of Asian foods from vendors based in nearby Flushing and a beer garden serving up brews from local producers. All signs point to the nighttime hours being the same, which means you can chow down on bibimbap and knock back a pint of Big Alice as the fireworks flare overhead.
5-25 46th Ave, Long Island City, 12pm.

Photo via IFC Center
Special Screening: Jaws
Ah, Jaws: the pride and joy of American cinema. The giant shark returns to theaters this July 3 for an undoubtedly appetite-killing lunchtime showing -- which is apparently just how America likes to celebrate its nationhood, considering tickets for the special Independence weekend showing are nearly sold out. Leave it to this country to turn a giant shark into a cultural icon.
Nitehawk Cinema, 136 Metropolitan Ave, Brooklyn, 1:30pm.

Photo via HeyEvent
Get Summered: Riis Park Beach Bazaar
If you're looking for a day-to-night party to keep up your Independence Day festivities, head to this free beach party at Riis Park Beach. Hosted by Get Summered, a creative collective that curates parties throughout New York, this two-day bash (July 4, July 5) will includes house and hip-hop heavy DJ sets and live performances. If you RSVP through Flavorpill, you'll get 20% off bus transportation.
Riis Park Beach, 157 Rockaway Beach Blvd, Rockaway Park, 12pm (also happening on Saturday)

Photo via Resident Advisor
Zeitgeist at Sea [Boat Party] at Circle Line Cruises
Take your drinks and music out to sea with Zeitgeist at Sea. Presented by Williamsburg electro-club, Verboten, this summer boat party will feature tropica beats from west coast DJ Goldroom as well as sets from The Golden Pony and Hiyawatha.
Pier 83, West 42nd Street, New York, 3pm.

Bushwick A/V Independence Day Sunday After Afters
If the 24-hour dance marathon wasn't enough, don't worry because Bushwick A/V Independence Day celebration is continuing at a "comfy Sunday loft" (secret location) Picking up when the previous celebration ends at 4am this party will feature more house DJs and will be the final stretch of the holiday weekend.
R.S.V.P by emailing somewhereinbushwick@gmail.com for the secret location and details, 4am.

Photo via Get Invited
Mister Sunday at Industry City
DJ duo Eamon Harkin and Justin Carter, otherwise known as Mister Sunday, will help you wrap up your weekend with this outdoor day party featuring DJs spinning solely on vinyl, vegan (or not vegan!) burgers and summery sangria and sodas from Brooklyn Soda Works. Bring you kids for free, bring you dogs on a leash and come savor the last of Independence Day in this outdoor courtyard situated between two buildings.
Industry City, 644 2nd Ave, Brooklyn, 3 pm.