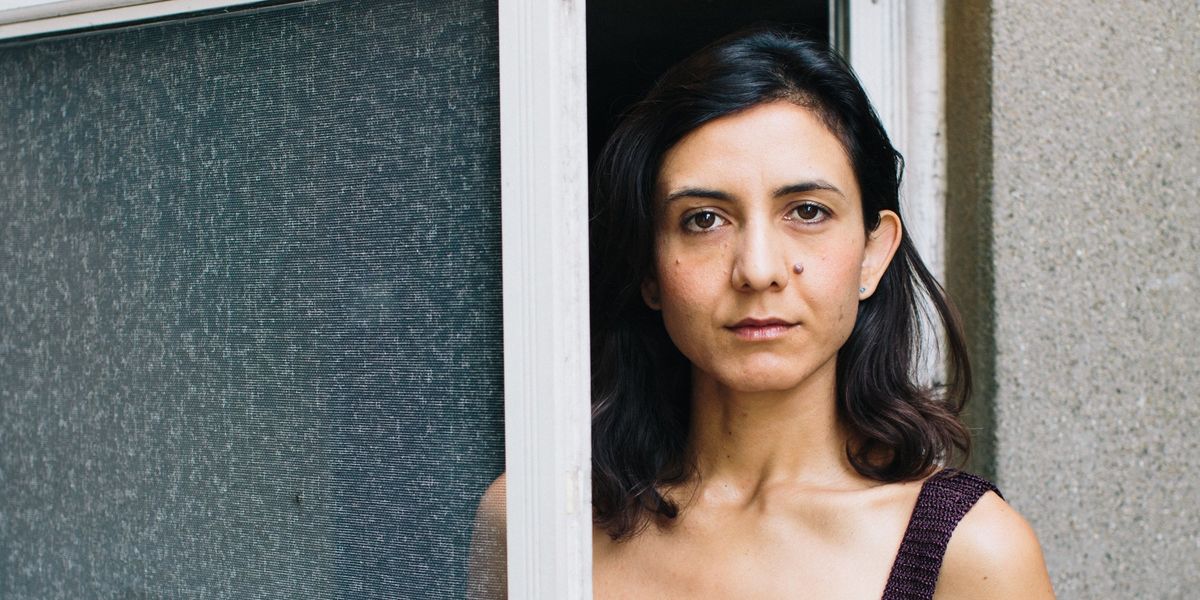 A Leisurely Skype With Ottessa Moshfegh

When we finally video chat in early May, our plans to meet in person thwarted by COVID-19, Ottessa Moshfegh is leaning on a white wall in a black shirt bearing the announcement "LEGENDS OF SUMMER 2013 STADIUM TOUR" and floating images of Justin Timberlake and Jay-Z in formal evening wear. A few minutes into our conversation, she leans back on white sheets and velvety pillows, revealing a bed. "I'm just going to get comfortable," she tells me and lies down for the rest of the hour.

This setting fits. In 2018, Moshfegh's second novel My Year of Rest and Relaxation, an account of zealously pursued bedrest, propelled Moshfegh to literary fame. The book is a trial log of a disappointed white girl who decides to sleep as much as possible, comatose in an Upper East Side apartment on the eve of 9/11. It's slick and addictive, with a signature Moshfegh predatory scent. The novel could certainly be read as a prickly satire, but according to my best friend Sophie, it's more fun to take on face value. "I find it very inspiring," she texted me, "It helps me indulge in laziness and naps."

If sloth was the cardinal sin in My Year of Rest and Relaxation, and wrath the sin in 2015's Eileen — Moshfegh's first novel, a grody character portrait of a young woman in a hard-bitten town in Massachusetts — then the sin in her new novel Death in Her Hands might be innocence.

Written prior to Rest and Relaxation and kept filed away until now, Death in Her Heads is more spare and minimal than Moshfegh's other work. A recent widow Vesta lives alone in the woods. She's decamped to a new town to process the death of her repressive husband, a professor who has left her with a ghostly last name. One day, while walking her dog in the forest, Vesta finds a note on the ground about a dead woman and the animus begins. The story is elemental: animal, human, mystery. In plot, it echoes Olga Tokarczuk's 2009 novel Drive Your Plow Over the Bones of the Dead: a rural chase, dogs, a woman devising nicknames and suspicions. Energized by the note she finds, Vesta imbues everything she sees with desperate imagination.

When I ask Moshfegh questions about her books, she seems to hurry out of answers. But when I turn to the subject of dogs (a central theme of Death in Her Heads), she needs no encouragement, turning the camera to show the two pups snuggled next to her. She waits patiently for my oooooooos and awwwwwwwws. The larger dog belongs to Moshfegh's husband Luke, the smaller terrier she takes into her arms.

"This is Walter, this is my baby. He's getting shy," she says in a cartoonish voice. "I really love dogs," she confirms, with emphasis. (Walter shares a name with Vesta's former spouse in Death in Her Hands; Moshfegh says she forgot she'd already used the name in a book when she got the dog.) When her parents fled Iran during the revolution, Moshfegh tells me, "my mother smuggled this crazy looking dreadlock-ed poodle into the U.S." This poodle gave birth to Tinky, Moshfegh's favorite dog. "She was so psychic," she says, "she was completely magical and wise and so sensitive. She lived until she was 17. And then even then she didn't die, she just disappeared. I had heard sometimes animals will leave their family or their pack when they're ready to die. I thought that was the most incredibly generous last act."

Talking about Tinky—and the attenuating themes of instinct, isolation, death, intuition, and last acts—feels more relevant than asking about Death in Her Hands directly. In very summarized fashion, Death in Her Heads is about walking a dog. "It was comforting to have an animal, so consistently near and needy, to focus on, to nurture," Moshfegh writes, "Just to have another heart beating in the room, a live energy… like a child and protector, both." This codependent dynamic is ripe for explosion — and Moshfegh doesn't resist.

Moshfegh's approach to novels often seems like an experiment about people conducted in accordance with a scientific method: isolate an element, trap it in place in order to study it. Her characters go to extraordinary efforts (like murder!) to be alone — and once they're isolated, Moshfegh prods them viciously. "I think people reveal themselves then they think that no one is watching them," Moshfegh says. She seems to have taste for characters spinning the drain, but paces their heightening frustration like a thriller.

Isolation and its various diversions have become major genres of the current moment, and the extreme solitude that operates in Moshfegh's work has a new veneer of relatable horror in a self-isolating culture. As Vesta walks through the woods, finding a villain in every tree shadow, the question about what it takes to lose your mind has new urgency.

"A walk in nature is a strange invitation to consider your entire life," Moshfegh tells me. But Vesta's mind is unrelenting, and there's a claustrophobic crunch to the Northeast trees, growing desperately tall to find sunshine. While writing, Moshfegh "thought of Yeats, composing as he walked." In the Northeast, she says, walking inspires a way of thinking. "It can be very intellectual. If you were walking in the jungle in the Amazon, I don't think you'd be thinking of concise esoteric theory. You might be feeling more. I'm from Massachusetts. It's super brainy. We forget we have bodies until we have to go see a medical doctor."

Now, Moshfegh spends days writing and walking her dogs in Pasadena. From her vantage point just outside of Los Angeles, Moshfegh courts Hollywood. She's adapting Rachel Kushner's The Mars Room as a screenplay and trying to produce her own projects for TV and film. She's also working on a new novel — set in the medieval period. "It's roughly late 14th century, so I get to look at some medieval art," she says with peak interest. Pictures in books are a welcome respite, she says, as she's judicious about reading. "This is really sad and sometimes shameful, but I really can't read very much for a lot of different reasons," she tells me. "The first reason is physical. I have some muscular eye issues and I exhaust my eyes working on my own shit so if I have to read any more I'm like oh god this hurts. The other thing when I'm writing a novel, like I am right now, it's really hard to read other people's fiction. Either it's boring because it's not what I want in my head or if it's amazing and if I pay too close attention to it, then I'll lose the track that I'm on. For the same reason, I can't really listen to music, I'm too hyper-sensitive. I can listen to music maybe once or twice a month, not just turning on the car, but like actually sit down and listen to music, because it affects me deeply."

In some ways, Death in Her Hands is also a story about hyper-sensitivity. When you isolate the Y away from all the X factors for a while, the X factors can have an outsized effect on the Y when they finally do interact. Like a character alone finding a note in the woods, the under-stimulated person is highly vulnerable to new information. They become someone very easy to push over the edge. But induced vulnerability can be a creative tool. I think of the poet Stevie Smith, who insisted on a life of very few intrusions, few stimuli to "sweeten simplicity," so that every new interruption was like a glorious, wild intervention. With fewer interactions, each new element can feel powerful.

"What did you listen to," I ask "for your last monthly music exposure?" I hear a helicopter over one of our video calls as Moshfegh thinks. "Maybe the last song I looked up to listen to was Madonna's 'Ray of Light'. There's something about that song," she says. "So celestial and also totally manageable. It's not going to push me over the edge."