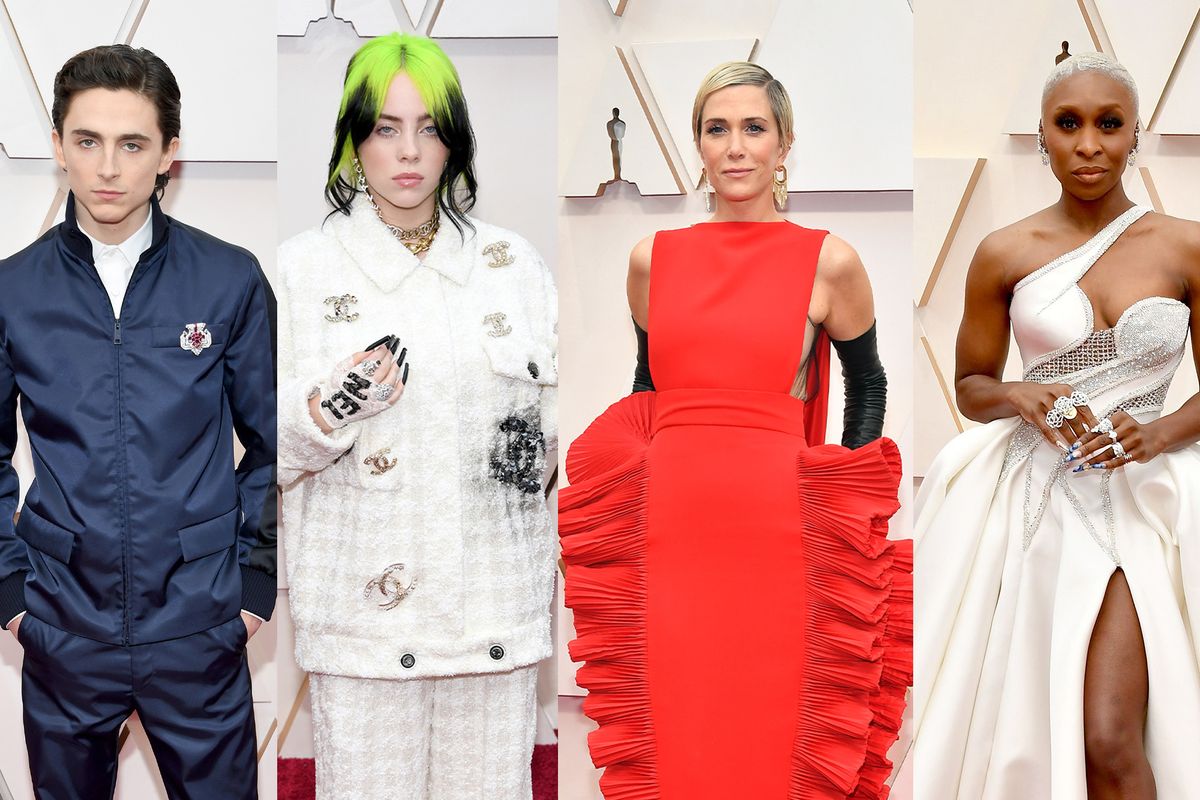 Well, it happened. The 92nd Academy Awards. Our Superbowl. The Oscars are a revered ceremony even in 2020, when some viewers might find them antiquated. "I never want people to forget what it is," The View moderator Whoopi Goldberg told her audience on Wednesday's show. "'Cause they say 'Oh, Hollywood people patting each other on the back,' yes, in fact, that is exactly what people are doing because what we do is art; it's an art form... and it's a celebration."

But it's also a celebration of an Academy (and film industry at large) that is quite selective of who is deemed worthy of a statue. This year's ceremony nominated only one performer of color (Cynthia Erivo for Harriet) and nominated not a single female director for Best Picture despite worthy contenders such as Greta Gerwig (Little Women), Lulu Wang (The Farewell), and Melina Matsoukas (Queen & Slim). "The industry is in the clutches of an extremely public identity crisis, in which the fresh, multicultural image it aspires to is undermined by the observable evidence," New York Times writer Reggie Ugwu aptly noted.

And yet there are glimmers of hope. Director Taika Waititi and performers like Florence Pugh and Cynthia Erivo represent a new wave of talent that can help reshape and reroute an industry paralyzed. And can they dress? Yes, absolutely. "Taika Waititi is a fashion superhero," the Hollywood Reporter wrote in 2017; Pugh is a recent Vogue cover star; "[Cynthia Erivo] is literally is what fashion needs," stylist Jason Bolden recently told Variety. The new wave is bringing some serious fashion credentials, understanding styling to be a critical tool in both generating headlines and giving folks a window into who they are and how they see the world.

But even an influx of heavy-hitters does not necessarily an interesting red carpet make. "In general I find carpets to have become vastly less interesting," says Garage Fashion Director Gabriella Karefa-Johnson. "Maybe it's the fact that a moment like Julia Roberts flashing a hairy armpit at the premiere of Notting Hill would never happen in 2020, nor would Björk wearing a literal beanie babie to the Oscars — well, actually that would for sure still happen because... Björk. But I think that for the Oscars, especially, there is this weird crutch of having to represent 'Hollywood Glamour' which more often than not translates into safe, 'classic' silhouettes. It's one of the biggest stages on the fashion calendar but it's consistently devoid of any semblance of fun, which, to me, is the very soul of fashion."

So how did last night fare? Let's start with getting the king-shaped elephant in the room out of the way: Timmy. Perhaps, in retrospect, we are to blame. Us (or am I projecting, and it's mostly just me?), who gassed this young man up in a way that his only next option was to fall. A "chic mechanic," a "sexy paramedic," a valet attendant, a gas station manager — these were just some of the ways Timothée Chalamet's navy blue Prada jacket and trousers paired with a Cartier Vintage 1955 ruby & diamond brooch were described online. (He's rumored to have picked up the outfit from a Prada store in Los Angeles earlier in the day.)

The look was unimpressive given his track record, and yet I'm still obsessed. In a room full of suits — literal and figurative — I'll always favor something counterintuitive, even if it's not a total serve. I think the biggest miss here is the color. This same look in baby pink would have given the material a bit more sheen and a real pop. I think most disappointing is how little I want to talk about this outfit in comparison with so many of his other carpets.

We're not going to waste time on Renée Zellweger in Armani Privé, Margot Robbie in Chanel, Charlize Theron in Dior, Florence Pugh in Louis Vuitton, Saoirse Ronan in Gucci, or even our beloved gay icon Laura Dern in Armani Privé. We've seen it all before. Let's focus instead on some women of a certain age. Most notably actress-activist Jane Fonda, 82, in a beaded red Elie Saab Couture dress first debuted at the 2014 Cannes Film Festival. She paired the look with her now-signature red coat (which in November she declared was the last article of clothing she'd ever buy) and Pomellato jewelry, "because it only uses responsible, ethically harvested gold and sustainable diamonds," she wrote on Twitter.

Other best dressed contenders included a 1-2 punch from Atelier Versace, first with nominee Cynthia Erivo in a sculpted white gown featuring a graphic cut, asymmetric bustier entirely pleated by hand and a skirt hand-embroidered with Swarovski crystals. "It was as if that dress had to summon up enough glamour for all of the black actors, Asian actors and others who were overlooked," wrote Washington Post Fashion Critic Robin Givhan. "Erivo was standing in the limelight for herself, but surely there were those who took in her presence and saw themselves in her." And then there was Regina King in a commanding custom peach-toned silk Atelier Versace dress featuring an asymmetric bodice that was fit perfection.

Attention must be paid to some other faves, including Sandra Oh in Elie Saab Haute Couture, Brie Larson in a custom Celine embellished gown and cape, and Natalie Portman, whose Dior Spring 2020 Haute Couture gown was embroidered with the names of overlooked female directors. "I wanted to recognize the women who were not recognized for their incredible work this year in my subtle way," she told the LA Times's Amy Kaufman on the carpet.

Opting out of a safe silhouette, and with my fave look of the night, was Kristin Wiig — who, as writer Kara Brown noted on Twitter, has found her best hair. You're gonna read some ~takes~ that will latch onto tweets calling the look "a hot piece of lasagna" or comparing her to Sebastian from The Little Mermaid, and they're not wrong. But that's fashion, honey. Wiig wore Look 56 from Maison Valentino's Spring Haute Couture collection. It's a crêpe armure coat and dress with taffetas volants and Valentino red tulle and long black gloves that took 650 hours of handwork, according to the storied house's PR. In this house, we stan a risk.

Now we gotta talk Dolce & Gabbana real quick. They made their presence known in a big way, outfitting Mindy Kaling, Keanu Reeves, Reese Witherspoon, Holland Taylor, Yalitza Aparicio, Dwyane Wade, Rachel Brosnahan, Pedro Pascal, Aaron Paul, Gerard Butler, Sofia Vergara, Andy Samberg, and Anthony Ramos for last night's ceremony. This effort to bring D&G back to the red carpet forefront has been an overwhelming success thanks to many of the industry's top stylists, including those who once went on record saying they wouldn't outfit clients in the brand. Hmm.

And lastly, let's look at sustainability — fashion's buzziest think to talk a lot about but not act on. In addition to Fonda's repurposing, we had Elizabeth Banks re-wearing her 2004 Badgley Mischka dress at the Vanity Fair Oscars Party. Best Actor winner Joaquin Phoenix re-wore the one button black Stella McCartney tux he's been wearing all season. "He chooses to make choices for the future of the planet," the designer tweeted on January 6. Can we be honest for a moment? While admirable on the surface, this is a custom look and therefore did not need to be made in the first place. A better choice might have been tailoring an already-made tux.

Last we had Kaitlyn Dever, whose Louis Vuitton gown featured eco-responsible silk satin that was embroidered with Swarovski crystals and beads "I'm here supporting sustainable clothing," she said on the red carpet. "It's really important." Dever joined actresses Léa Seydoux and Elena Andreicheva (who won for her documentary short Learning to Skateboard in a Warzone (If You're a Girl)) in being outfitted by the Red Carpet Green Dress initiative, a women-led movement that's definitely worth putting on your radar.

So was this a good red carpet season? Absolutely. It's about having fun, generating conversations, and hopefully spreading the unique joy conjured through the fine art of haute couture (and ready-to-wear — that too!). That it's messy at times is part of the fun. That it's a language that can wordlessly communicate ideas both big and small is why I love it. It's also why I need a break from it. Until next time!