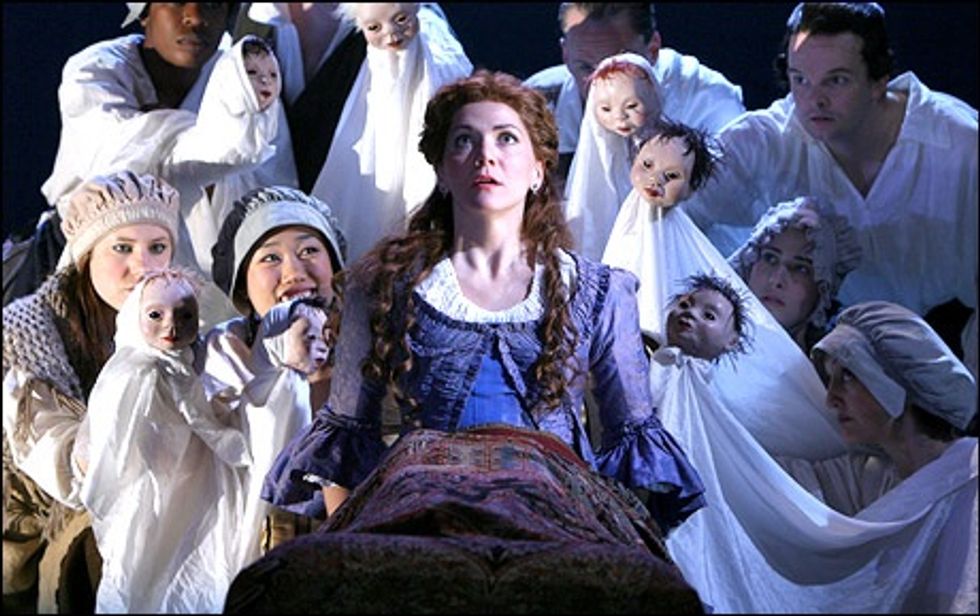 Coram Boy, which had a successful run last year on Londonâs West End, opened on Broadway last Wednesday. The play -- about a boy who defies his rich landowning family to become an apprentice to the composer Handel -- was the Broadway debut for many of the cast members. A few of the first-timers told me at their after-party at Tavern on the Green that Coram Boy, which includes a full choir singing parts from the Messiah throughout, was the perfect combination of theatrical elements for their debut.

The beautiful, auburn-haired Ivy Vahanian, who plays the heroine Melissa, said of her role, âNot only am I on Broadway, but I get to fly, I get to give birth, I go through great suffering and then I have great redemption and I get to sing the Hallelujah chorus! And thatâs why I love it. I love that itâs so sensational. Everything is tickled.â And I have to add, that she gets to wear the most amazing long wavy wig! Ironically, it just so happens that the expansive plot and sensational elements were part of the criticsâ complaints in the mediocre to horrible reviews the play -- which, with a budget of $6 million, was the most expensive non-musical to ever hit the Great White Way -- received last week.

I saw Coram Boy when it was still in previews and as I wrote before, I loved it. I found it to be a great evening of entertainment and one of my favorite nights out at the theater this year, but I knew it was probably going to get panned. Itâs based on the young adult novel by Jamila Gavin and all the loose ends get tied up a little too neatly with the Hallelujah chorus ending the show.

But you know what, Iâm tired of âintelligent, therefore good, theaterâ having to be by a certain playwright or in a certain style. I saw Tom Stoppard's The Coast of Utopia -- (albeit Salvage, supposedly the worst one) and I fought my heavy eyelids the whole time! The sets were great and the acting was certainly something to see, but it didnât keep me perched on the edge of my seat for three hours the way Coram Boy did. Sure, Coram Boy wasnât the deepest part of the sea, but it was choppy and fun and kept me afloat. And I agree that the language and story werenât the most sophisticated, but when most people are ingesting the script for the first and only time -- seeing as how the price of a ticket doesnât normally allow for repeat showings -- there's something to be said for a story that you can grasp right away. Theater isnât like a book that you can flip back to and re-read the parts you missed. In all these ways, Coram Boy satisfies, and itâs hard to think the Brits who gave the play great reviews and filled the seats each night would be so wrong.

Photo of Ivy Vahanian and cast of Coram Boy.