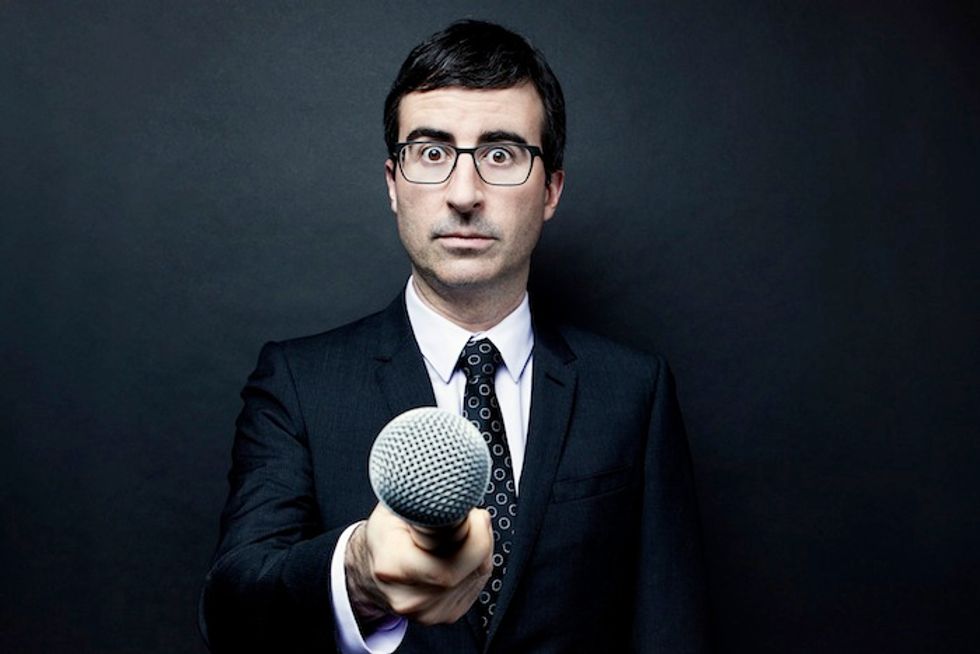 On John Oliver & Jon Stewart: Why Do White Men Get a Cookie?

by Sandra Song
PAPERMAG
So the Internet has been freaking out over John Oliver dropping some realness about the Internet being a shitty place for women -- in the same way that Jon Stewart got a ton of love for talking about Charleston a few days ago. Which, you know, is great and super valid and all, but is definitely something that nags at the mind of feminists/people of color for obvious reasons.

But before you yell at me, know that this is a critique of media in general -- namely re: what voices they decide to amplify. After all, I have no issues with white males who also think our world is messed up, but what I do get incensed about is how they're the ones who tend to get a giant virtual cookie/pat on the back for basically saying the same things marginalized groups have been saying forever.

Because yes, the visibility they lend these issues is great, wonderful even, but why are these guys the ones getting the retweets, re-posts and press from literally every major outlet about what visionary culture warriors they are? Why do these white guys get a standing ovation for talking about important issues that the media's perfectly willing to dismiss every other day (especially when they come from other mouths)? Why do they continue to get mad claps while the actual disenfranchised continue to just field a ton of and messages about "going home"? After all, I'd much rather have more stories about Whoopi telling Wes Anderson to cast more POC or more than 5 things about Kendrick's "I am Trayvon Martin" statement, than a millionth article about John Oliver being a conscious white dude. Because agency, people! Women and POC do cool things for their own causes all the time!

girl: *shares experience of traumatic harassment*
boy: sounds made up to me

Remember, a big criticism many activists have of "allies" is that while well-meaning and undeniably useful, the fact that they are the ones being held up as revolutionary thinkers of how messed up our society is, is really, really frustrating. It also suggests our ideas need to be "validated" by these men to make them real. Because I really do get a death/rape/"go back to xxx" threats every time I bother to write something that touches on race or feminism, and I'll probably get a few more to add to my collection once this post goes up. But is this not legitimized until Stewart makes a statement on it?


So…. man takes down online harassment women face and finally it is an issue worth talking about.
— roxane gay (@rgay) June 22, 2015


We'd have a much better media if there were a multiplicity of narratives and more stories told/shaped by people that aren't white men (seeing as how they dominate what we have right now), but by holding up Stewart, Oliver et al. as the definitive voices of these issues you are reproducing the systematic power inequalities that's already a huge part of what makes our media so problematic. The narrative is controlled and continually propelled by the same people it's always been created by, rather than the people who have been directly affected by said circumstances.

Because once again, while giving this stuff a platform is awesome, a lot of the times it comes off as less of a signal boost and more of a "let me give you relevant take on this." So maybe the answer is to give a woman of color her own satirical news show? Or to start talking more about what useful contributions Jessica Williams has made to this discussion already? Or, you know, just sit down and listen to the women-run blogs and thinkpieces that have already tackled this issue?

After all, I'm sure we can all agree that Ta-Nehisi Coates writing about the Confederate flag is a lot more salient than a British comedian's take or that reading Brianna Wu's own post about female gamer harassment is a touch more relevant than a snippet of an old interview in Oliver's segment -- so keep clicking those articles and signal-boosting those voices, rather than the same ones we've been listening to for ages.