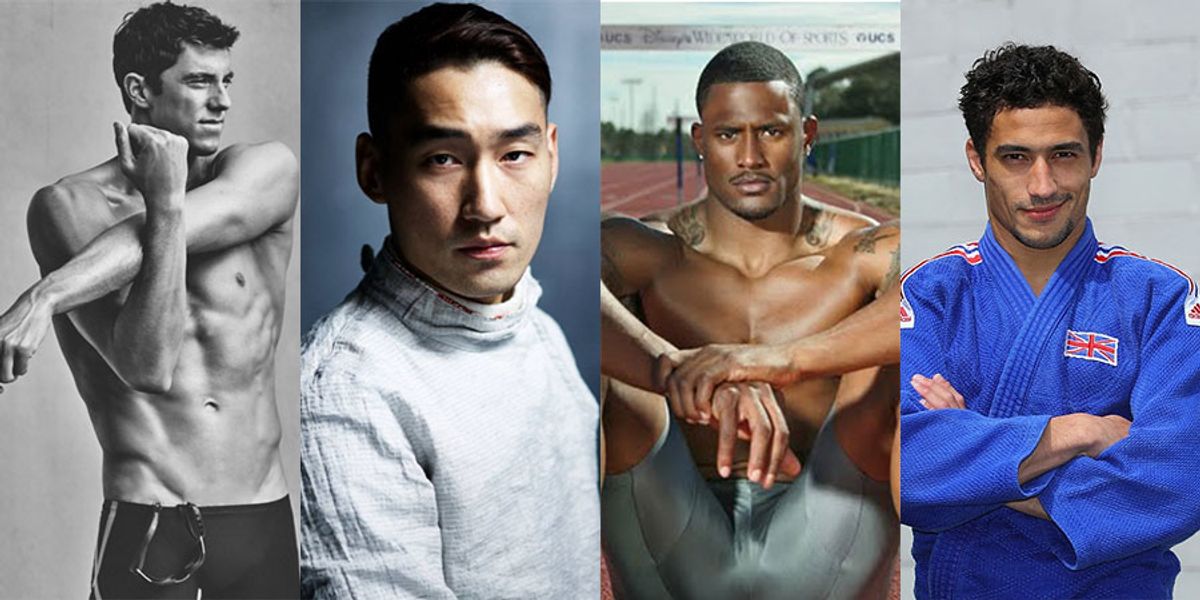 Who Is the Hottest 2016 Summer Olympian?

Every four years, the world comes together for two weeks to celebrate the otherworldly abilities and drive of the most athletic human beings on the planet. It's also a chance to see some of the finest specimens of humanity the globe can offer, operating at peak physical capability. The Summer Olympics, with their tiny bathing suits, clinging spandex, and yards of bared skin, are prime time to fawn, ogle, and lust over the superhumanly fit men competing. This year, we've rounded up 40 of the sexist athletes and pitted them against each other in a battle for the gold medal for Sexiest Male Olympian. Voting closes tonight--the poll is below, and all the FINE evidence of these sexy olympians is below for your viewing pleasure. May the hottest thotty body win.


If he's this hot on land, imagine him wet.

Perhaps there is something about black and white portraiture that really points up how ripped your torso is?

As if abs weren't enough, he also has a really cute dog.

Your sailors. Your water polo players. The men who's souls wear navy blazers and boat shoes unironically. Are they actually nice on the inside? Who knows and who cares? We just want to sit on their incredibly chiseled faces.

When you can wear seersucker and we still want to have sex with you, you're doing something very right, or very wrong.


Our good sense is screaming "HELL NO" but our bodies say "America, FUCK YEAH."

This Canadian diver is giving his best Blue Steel and has his own lifestyle website called mr-max.com. That's all we're going to say about this.


This man's jawline and gold-medal confidence (on the left) would scream "hedge fund manager whose wife makes him shower after Scores" in a different life.

Tattoos, renegades, secret girlfriends, secret DJ alter egos: These are the deliciously dangerous dudes who always know where Olympic Village after hours are.

The triple-jumper representing Guyana is a world record holder and makes house and footwork tracks under DJ names Good Junk and allblack.

The " bad boy of judo" got interested in the sport after fighting over Pokemon cards (awww!).

Lacourt has the floppy hair and tattoos of every guy you wish were hooking up with at Union Pool at 3 A.M. (but really you're just eating guac in the corner crying).

He's got a secret girlfriend, a reputation for intimidating opponents during warm-ups, and that six-pack. Sign us up.

Look, we all know swimmers are hot--they've got great abs and they strut around in tiny Speedos. But you know who's really fire? It's fencers. Full-coverage white bodysuited, feature-erasing-mask wearing fencers.

Frankly, we could have done an entire bracket dedicated to hot Italian fencers. But we restrained ourselves.

We would cross swords with him any day.

If Botticelli painted a portrait of Sufjan Stevens, this is what you'd get. Ciao, Giorgio!

It's a shame the fencer's wire mask has to cover up such beautiful bone structure.

That one sweaty tendril!

Welcome to the gun show.

It's all love and love all (see what we did there!) with Rafa.

Leyva might also be in competition for "wokest" athlete, saying of his fellow lady gymnasts: "It's just so powerful to see women like that get praised the way that they do. That could just be the feminist in me, though."

The cutest baby. We just want to put him in our pocket.

New rule: He can only wear tank tops.

Speak French to us.

The finest gams from across the globe.

Daddy long legs! And one of the fastest men in the world.

There was surprise visit from @YolandaHFoster on set for our August cover shoot with @GiGiHadid and @AshtonJEaton: https://t.co/A6wvZQch7p
— Vogue Magazine (@voguemagazine) July 14, 2016

He's a decathlete, which means there are ten different events to watch him stretch, flex, and impress.


Eyebrows Cara Delevingne would be jealous of.

We just want to pinch his cheeks (both pairs).

He's never seen shoes before! Adorable! Almost makes us forget handball is not a real sport.

Everyone makes passes at horsemen in glasses.

Phelps is already well on his way to training his son in the ways of swimming and social media presence.

The tiny Irish flyweight (we'll let you make your own leprechaun jokes) has an adorable daughter who's almost as big as him.

That's one chill baby. (And one hot dad.)


You've seen the entrants. You've stalked their Instas and lusted over their Twitters--now it's time to cast your votes. Who is the hottest person in each bracket? Vote below!