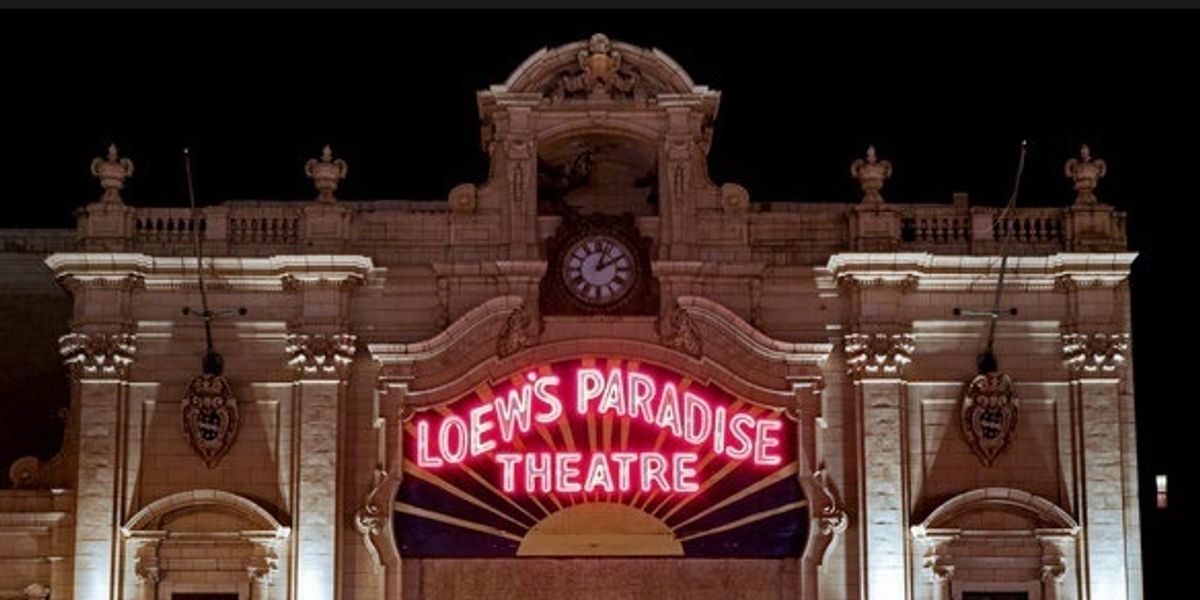 Before cineplexes--and before you could easily access old movies at home—going to see a movie was a completely special adventure. You had to leave the house, often entering some eccentrically glorious theater that added, in its grandiosity (or sometimes squalor), to the cinematic quality of the experience. Here are some of those lost treasures du NYC cinema:

A big, gorgeous theater between 49th and 50th Streets, the Rivoli played host to Oscar fare like West Side Story, Cleopatra, and The Sound of Music, which all attracted big crowds of people plopping their money down for some larger-than-life showboating. The huge screen gave a panoramic view into beautifully art directed films, making them seem even more spectacular than they were. Opened in 1917, the Rivoli eventually became the UA Twin, and then in 1987, it closed, paving the way for yet another skyscraper. Also: The Guild, 33 W. 50th Street, a beautiful, gilded Rockefeller Center area theater where I saw a re-release of Fantasia. It's now a Nautica.

THE WAVERLY THEATER (325-Avenue of the Americas)

In the 1960s, the Waverly was immortalized in the musical Hair as the place where a hippie girl said she met "a guy called Frank Mills" and was desperate to have him back. In the 1970s, it went on to be a home for interactive Rocky Horror Picture Show showings that drew throngs of just-coming-out kids and their allies, fully dressed for a time warp. In the 1980s, the campy, socially conscious Hairspray was a big hit there. Today, it's the IFC Center, a safe space for docs.

This weirdly shaped theater with an art deco interior was a bit of a dive, but it showed wonderful old films, and was featured IN a wonderful film, when it got a shout out in Annie Hall. It closed in 1987, briefly reopening in 1993 and again in 1996 before being subsumed into Symphony Space. Also: The Regency Theater, a West Side revival house full of foreign gems.

The most charming of all the revival houses, this one showed vintage double bills (All About Eve and Sunset Boulevard) in a cozy East Village setting that reeked of old Hollywood coming to NYC. Big stars like Gloria Swanson, Joan Crawford, and Ruby Keeler had been there and put their foot or hand prints in the cement outside, starting your experience with some glamorous realness. Inside, the crowd was fanatically devout; my friend and I got yelled at once for talking in the middle of Harriet Craig—and they were right. The space went on to showcase live theater.

It was a tragedy when this long running theater—the largest single screen movie place in NYC—shuttered due to dwindling receipts earlier this year. Through the decades, the Ziggy featured an array of A-list films, as well as premieres and galas that made moviegoing unique and elaborate. It'll be turned into the Ziegfeld Ballroom event space, where we can dance around and try to relive the memories. (Also sorely missed are art houses Carnegie Hall Cinema, 881-7th Avenue, and the nearby Little Carnegie, 146 W. 57th Street. And I loved seeing movies at Radio City Musical Hall, accompanied by a stage show, complete with high-kicking Rockettes. In my youth, I saw Broadway adaptations like The Odd Couple and Mame there, making for truly gala evenings).

Opened in 1926, this grand palace lasted all the way until 1988, but for me, its bizarre heyday was the rockin' 1960s. That's when the Walker became my salvation because I happened to grow up in the neighborhood and found a catharsis in the wacky succession of films they showed there. At that time, the Walker only seemed to showcase flop movies that had bombed in other theaters, so I got to enjoy Boom! (a wacky melodrama with Liz Taylor and Richard Burton), The April Fools (a romantic comedy starring Jack Lemmon and Catherine Deneuve), and other duds, not thinking they were bad at all.

The Elgin, now the Joyce. Photo via cinematreasures.org

A pioneer of the art of midnight movies, the Elgin showed such culty classics as El Topo, Eraserhead, and The Harder They Come, all attracting a slightly high crowd looking for something offbeat. Even when it was an adult theater, they featured midnight movies of cult films! The place closed in 1978 and these days, it's the classy Joyce Theater, where dance is served.

THE PARADISE (2403 Grand Concourse, the Bronx)

Also known as Loew's Paradise, this resplendent theater was designed to evoke a 16th Century Italian baroque garden, thank you. Opened in 1929, it lasted all the way until 1994, and was landmarked three years later. Eventually, the space was leased to a church, which must have the most dazzling services in the country.

An incredibly ornate, golden movie palace constructed in 1929, this one originally served movies, vaudeville acts, and live organ playing, like so many of the other such establishments. In 1977, the strucure was donated to the Tabernacle of Prayer for all People. It's a real beaut! Similarly, the Kings Theatre (1027 Flatbush Avenue, Brooklyn) is an exquisite, refurbished ex movie house. Last year, I saw a perfectly enjoyable production of Annie there.