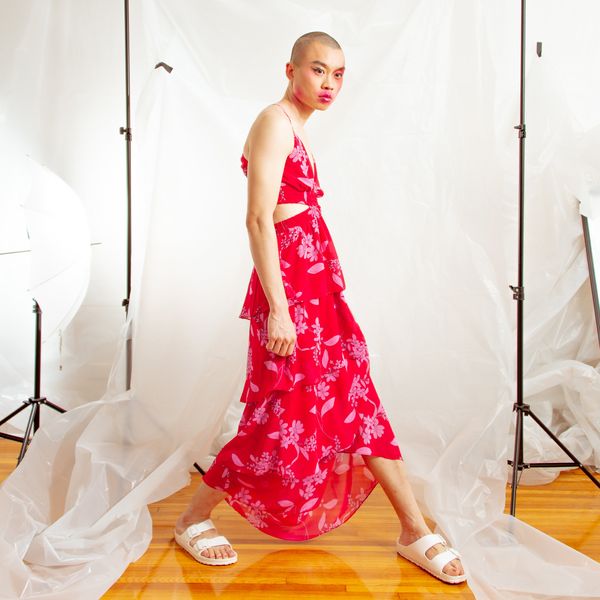 Brooklyn-based experimental rap artist and composer, OHYUNG, is back with the follow-up to his 2018 debut, Untitled (Chinese Man with Flame), with his newest LP, PROTECTOR.

Related | OHYUNG Explores Queer Love and Cooking on 'Care For You'

An avant garde jack-of-all-trades, OHYUNG's latest effort sees him push the boundaries of his project to practically every corner of the musical spectrum in an album that encompasses an almost dizzying amount of genres. From maximalist trap face-off of "NBA Finals" to the energetic punkish K-pop of Chinese New Year riot-starter "Shenme Gui," PROTECTOR is one stylistic curveball after the next. And while some juxtapositions may be jarring, such as the way the codeine-soaked trip-hop of "I Hate Myself" abruptly tumbles in to the blistering fast drum 'n bass break of "Ga Ga Ee," OHYUNG somehow manages to reign in all of the record's wild energy and off-the-wall tangents into a one cohesive sonic collage.

Tackling themes of beauty, gender, body image and diasporic longing, OHYUNG's exploration of themes on PROTECTOR is just as varied as his sound palette. Taking inspiration from sources like Taiwanese movies, gamelan music and even anime theme songs, PROTECTOR feels like a mutant scrapbook that wears its influences on its sleeve while rejecting nostalgic impulses at the same time. OHYUNG also calls on a cast of QTPOC collaborators to carry out his vision on PROTECTOR, working with artists like Charlie Sheena, Space Meow Doll, Qing Liberty and Hye Yun Park to create a communal party vibe that keeps the record upbeat and celebratory.

Ahead of the release of his sophomore LP, out now on Chinabot, PAPER caught up with OHYUNG to talk inspirations, influences, imposter syndrome and key takeaways.

Across the board, PROTECTOR takes a lot of left turns and switch-ups. I'm curious as to what kind of headspace you were in when making the record?

For PROTECTOR, I was really leaning into the idea of getting in touch with my emotional core in the moment I was working on each song. I felt like the more time I spend trying to define myself into a category like genre, gender, or overthinking Asian American identity, the more insecure with myself I felt. I guess it's all connected to feeling as liberated as possible. Like when Ice Cube says "fucked around and got a triple double," when you strip it all away, let the game come to you and just play (I've been playing a lot of basketball while working on this record). And I love combining multiple genres and playing with expectation. It's a practice of playing with extremes — combining noise music with super melodic pop, or aggressive rap with a cute voice. I want people to listen to my music and have no idea what's coming next. For me this album is important to be listened to from beginning to end if possible because while there's a lot of different things changing, it all works together like an integrated fucked up DJ set.

There are so many! Some of them include Dean Blunt, Yves Tumor, JPEGMAFIA, Princess Nokia, Gabber Modus Operandi, any Total Freedom DJ Set, K-pop like Apink, Soundcloud rap and pop, nightcore, William Basinski, Organ Tapes, film soundtracks like Akira. In terms of non-musical influences, I feel grateful for my friends who are always 100% themselves and inspire and encourage me to be the most free version of myself. They've really changed my life, as well as the way I make music.

What was the biggest challenge you faced putting PROTECTOR together?

To be honest one of the hardest things was mixing the record. My initial instinct is to add as many different elements as possible to the songs, but I end up overloading them and having to cut back. Songs like "shenme gui" and "ga ga ee" have so many things going on it takes me a long time to think about what to keep and cut and get the mix exactly the way I want them. Also while I like to mess with different genres, it's easy to end up with a project that feels completely disconnected with itself. I tried really hard to make sure the whole album feels complete in spite of its variation, and ended up left off a few tracks that I really liked because they just didn't feel right.

What does imposter syndrome mean to you?

I don't know. I sometimes have anxiety and often feel embarrassed by myself. I'm not trying to fake any confidence on this record. Part of me working through it is documenting it, so some of these songs like "i hate myself" and "fraud" are just trying to be honest and embody that feeling.

What was the collaboration process like for this album? How did that come together?

I usually work alone which can be lonely, but when I do collaborate I like to work with people from within my community or underground soundcloud POC weirdos hehe. I usually like to start a song idea before reaching out to work with someone. And everyone I worked with on this record brings a special and necessary energy. "shenme gui" is a demented Chinese New Year riot song in collaboration with Space Meow Doll (rapping in Chinese) and Qing Liberty ("Dyke boot to the neck!") where we cathartically dance-rage at the world. "ga ga ee," sung by artist and filmmaker Hye Yun Park (this song was inspired by an instagram video of them singing a karaoke song in Korean), is a K-pop/Jungle hybrid about diasporic longing and dreaming of a home. I also enlisted soundcloud jungle phenom Elevation to help with some of the technical finesse production on "ga ga ee," which takes it to a different level. Hye Yun wrote all the lyrics based on a dream she had. For "no one else," Charlie Sheena and I have been making aggressive rap music together for a few years and thought it would be fun to pitch shift our voices to play with the genders.

What do you hope people take away from this album?

This album is much less overtly political than my last album, Untitled (Chinese Man with Flame), but it still has elements of that (There's a few lines like "oh my god Asians stan for a killer cop, R.I.P. Akai don't give a fuck about a killer cop" in reference to the Asian American community's support of NYPD officer Peter Liang who killed Akai Gurley, which exposed a lot of the Asian American community's anti-Blackness). But my main focus for this album was just translating feelings into sounds. I hope people see this album as what my friend described it as "bright rage." To me PROTECTOR expresses outrage and dissatisfaction with the status quo — It starts out very agitated, goes into a depression, and comes out on the other end with euphoric pop and dreaming of another world.