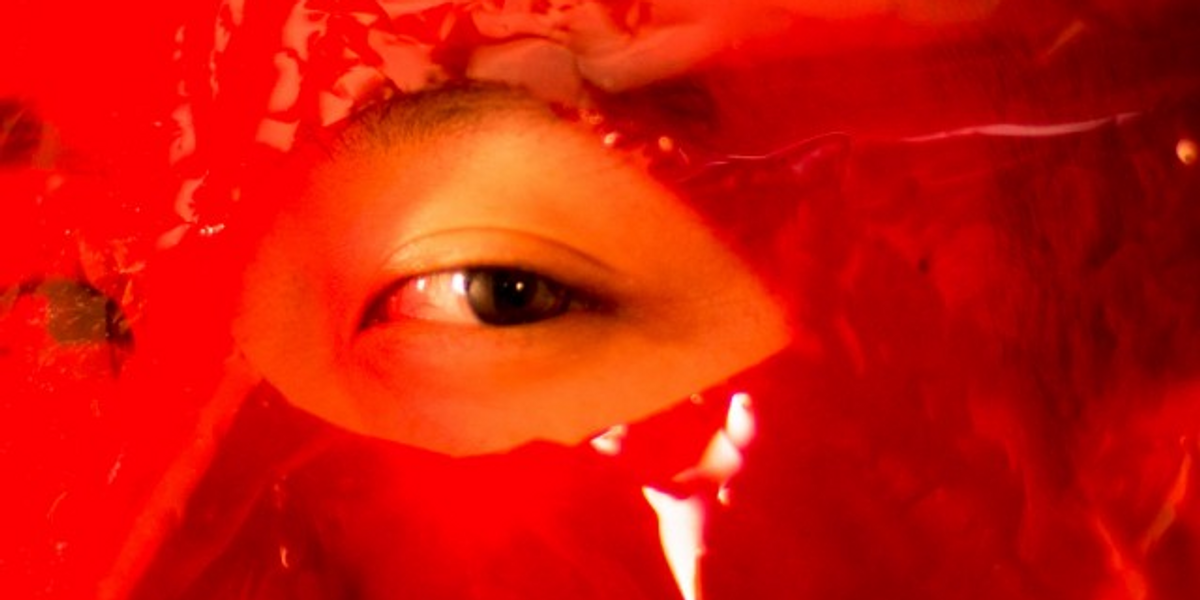 OHYUNG Explores Queer Love and Cooking on 'Care For You'

Towards the end of Barry Jenkins' Oscar-winning film, Moonlight, love-interest Kevin invites protagonist Chiron to visit him down in Miami with the promise "I'll cook for you." A cook in a small diner, we see Kevin cook for Chiron his "chef's special" in a montage that shows him carefully prepare ingredients and gingerly plate each element before presenting the dish with the wide satisfied grin of a child who's scribbled drawing was just hung on the fridge. The love and care that Kevin puts into making that meal for Chiron is subtly powerful display of deep affection. The act of one nourishing the other comes as the climatic culmination of the two's love story, a simple gesture that ends up being so profound.

In a similar sense, Brooklyn artist, OHYUNG, explores communication of love, especially queer love, through cooking. Frustrated by a lack of representation of diverse Asian American narratives across media, OHYUNG sought to add to the conversation with his queer Asian American music video, "Care For You."

With the aid of drag performer, Wo Chan, and actor/filmmaker, Hye Yun, OHYUNG explores a blossoming romance as it unfurls in the confines of a diner bathed in purple light. Inspired by the classic foreign film In the Mood for Love, "Care For You" follows the two protagonists as they share a series of intimate moments while putting together a meal. Laden with symbolic imagery, moments like pulling a string of pearls out of a raw chicken are multi-layered being hilarious, beautiful, absurd, and endearing all at the same time. "Care For You" washes over the viewer like gentle waves lapping at you feet during low tide, perpetually shifting but constantly present. What OHYUNG manages to capture the tenderness that lies at the heart of queer love, unique and incredibly special.

We caught up with OHYUNG, Wo Chan, and Hye Yun to talk about the making of the video and the ideas that went into its creation:

OHYUNG: Wo [Chan] & Hye Yun and I have been collectively making art together for the past few years. The three of us come from very different art mediums— Hye Yun is an actor and filmmaker, Wo is a drag performer & poet, and I make rap music & compose music for film, yet we have a natural ability to collaborate. I think it's partly because we each feel unseen by current Asian American media and have a deep desire to create alternative and non heteronormative-centered Asian American art. Previously we've collaborated on drag performances, installation/performance art pieces, and a web series, but these were all spearheaded by Wo & Hye Yun. I wanted to contribute to our art & friendship in a way I knew how, which was creating a music video from my album featuring each of our strengths, and portraying Wo & Hye Yun in a way where they felt strong & beautiful.

The inspiration behind the pearls being pulled from the rotisserie chicken in the video is from one of Wo Chan AKA PEARL HARBOR's longest standing drag acts. In this performance, Pearl combines audio clips from the television show Chopped and lipsyncs to Macy Gray's rendition of Radiohead's Creep while sensually pulling a pearl necklace from a rotisserie chicken.

The song lyrically was an exercise expressing tenderness. It was also written during a period where a close friend was struggling with suicidal thoughts. In a way the song is written for her.

Why were you drawn to In the Mood for Love as inspiration?

OHYUNG: It's just one of the most beautiful films. The color, the slow-motion scenes of Maggie Cheung and Tony Leung passing each other at the noodle shop...the pace of those scenes was perfect for the rhythm of the song Care For You, so I tried to match it. And I just wanted to create a MOOD. In the MOOD for love.

Tell me about what the process of putting the video together was like.

OHYUNG: The idea started after the three of us ate sushi and sat at a diner drawing on napkins and discussing future collaborations. While I came up with the concept, it was really important for Wo and Hye Yun to feel like the characters were true to themselves, and were heavily involved in the details of the story and the interactions. Also with the assistance of our incredible costume designer Sueann Leung, their costumes were mostly pieces picked out from their own closets. I worked very closely with Tingerine Liu and Jason Chew on the lighting and cinematography and to properly prepare for the 12 hour shoot. It was important that people working on the production were primarily Asian American and queer, and I believe the video's energy reflects this.

Hye Yun: For me this music video is such a sweet and gorgeous celebration of our friendship. I've collaborated deeply with Wo Chan, OHYUNG, Sueann Leung (our costume director) and Grace Naw (our AC, who is also a writer, director) several times and every time we congregate, I feel like a mischievous jovial child, giggling and gasping at our delicious imaginations. No ego, no stress, just love and awe for each other's talent and beauty! I love that when we come together as queer Asian artists, there is a swelling sense of urgency, like sitting down at a restaurant (preferrably in K-town or Chinatown) together after a long grueling day of hunger. Shout-out to OHYUNG for making my childhood dream come true, I got to be a hot stud and kiss a beautiful human on screen.

Wo Chan: I never thought I could be a nonbinary drag ghost! (And also real!) Truly though, however ethereal my role was, the process of making the video felt like a rebirth for me. The week Sueann and I spent cataloging the personal costume pieces I had collected over the years, the 12 hour home-run diner shoot exhausted me, and yet reminded me that I was very much a real, connected person in the world. I have received so much love in my life, so this felt like a way of claiming not just the joy, but the responsibility of love, that it inspires us to perpetuate and give back. I think that's the greatest gratitude about this project.

A lot of people talk about how cooking can be an act or display of love, in the context of the video it feels very intimate between the two main characters, does that personally ring true for you?

Hye Yun: Oh yes indeed! Intimacy and love begins and ends with food. It especially feels spiritual to eat and cook with Asian friends. A lot happens at a meal around the table with present and loving humans - it sparks artistic conversations and we share and hold each other's secrets.

Wo Chan: My family owned the Fortune Gourmet in Fredericksburg, Virginia, and they ran it for two decades, so I grew up saturated by food. It was the languages by which we lived and survived. It's good and bad thing, really, so many days I wished my parents could speak to me in ways beyond feeding me, but with the language and cultural barrier, it was beyond what they knew. And other days, there was nothing my mother could say that could soothe better than the silkie chicken soup she'd stew, with all the floating goji berries and ginger root. This is a parable in some Asian American bible I'm sure.

Something I loved about our video though was how food became a part of language. We were exchanging looks, scents, tastes, cracking jokes and eggs(!), that was our rapport. And yet, it's the inedible object pulled out of us, the pearls, like language not yet discovered or formed, that is most striking. It makes me think of what you said Hye Yun, "secrets", or how intimacy tries so hard to get at the unknowable, when, as my friend Victory Matsui says, "The unknowable is most intimate." I think that's what makes the video so satisfying to me: the release is so triumphant and defeating at the same time

Can cooking be queer?

Hye Yun: I don't cook that much, but I do queer EATING by giving myself permission to eat the way I want in all its messiness, fervor and glory. I like to break away from how I was taught to eat in the manner of a "good polite girl" --- eat with mouth closed, sit up straight, small cute bites, always keep mouth clean, don't make chewing noises, etc. All those restrictions. I feel very IN my queer body when I'm hunched over, slurping in a big bowl of noodle soup with my legs wide open and flexing my shoulders.

Wo Chan: I think I queer cooking by not measuring anything... hehe. I think cooking is certainly a gendered act, and that for a lot of us with more traditional parents we received it as gendered knowledge. But I think cooking, like art and language, is one of the things that makes us human, and that it's a patriarchal and capitalistic shame that so many of us are separated from that in our lives. I love to cook. Shame on you patriarchy and capitalism for making us too embarrassed and busy to nourish ourselves! In that vein, I think it is the best thing in the world when friends feed each other :)

What can we expect to see from OHYUNG going forward?

OHYUNG: After releasing the Untitled (Chinese Man with Flame) album, I don't think I'm going to work on a full-length album for a little while and focus on shorter projects and performances. I have ideas for a noise rap mixtape, a pop EP, maybe an ambient album to sleep to or for babies. I'm currently working on two film scores that I'm really happy with. And I'll definitely be collaborating with Wo and Hye Yun on something bizarre and unexpected.

Watch the PAPER Premiere of OHYUNG's "Care For You" below: