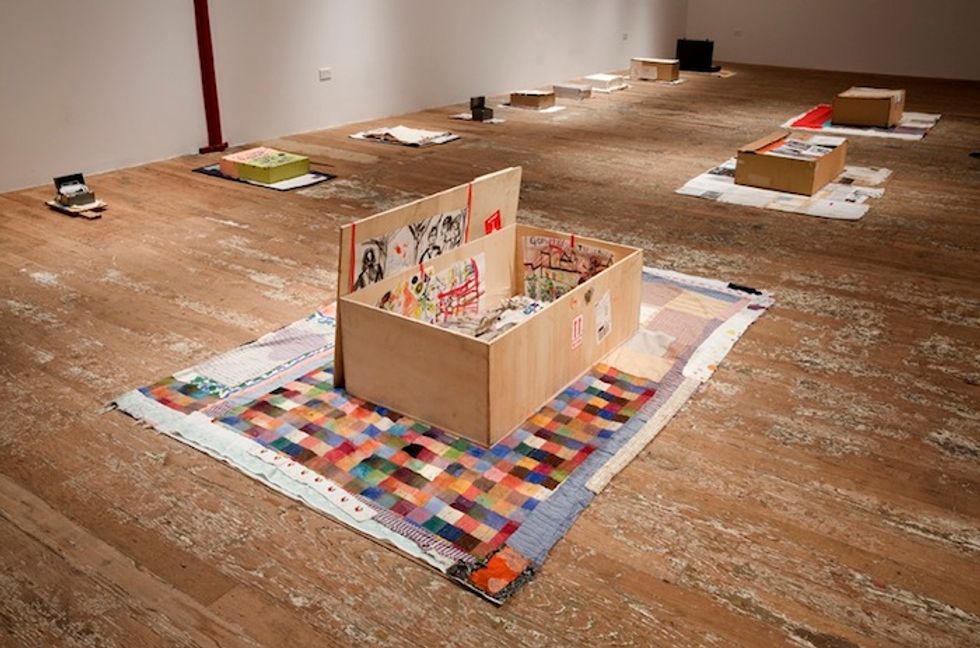 ODing On Fun: Everything We Saw and Heard At This Week's Art Openings

by Kate Messinger
PAPERMAG
Summer in the city has felt pretty nice the last few weeks -- equality, independence, summer Fridays -- and we took any excuse to attend a party and binge on art. From tropical getaway group shows to guilded cherries in gallery cocktails, this week and last's art offerings were more festive than the typical white walls-and-wine stuff.
Susan Cianciolo's kits at Bridget Donahue Gallery
At Lower East Side's Bridget Donahue gallery, and in conjunction with Gladstone Gallery, a solo show by artist and fashion designer Susan Cianciolo welcomed guests for a talk and performance paying homage to her costume design on Jack Smith's production of Hamlet in Germany in 2012. The performers wore Cianciolo's ethereal tactile garments and moved around a room full of boxes, or "kits," that the artist created as time capsules and diaries of her practice that has spanned almost 20 years. The crowd was diverse, with fashion and art types remembering her collections of the late '90s (that included a collaboration with ChloÃ« Sevigny) and milling around the room drinking cocktails inspired by the lavish event. The drinks each had a gold leaf cherry garnish, created by Arley Marks, the mixer behind the lavish cocktails at Dimes and Mission Chinese.

Installation shot of Salon 94's Tiger Tiger
The night continued at a party for the release of a new zine by Minerva, an art podcast through Know-Wave, Oh Wow gallery's online radio station. The podcast is hosted by four hilarious women of the art world (Fabiola Alondra, Anna Furney, Erin Goldberger and Jane Harmon), who interview and play music with a slew of well known artists, many of whom were in attendance, including Marilyn Minter, Justin Aidian, Leo Fitzpatrick and Jeanette Hayes. Eating gold and hanging with the elite, we could get used to this...

Torsos & Buckets at Salon 94 Freemans Alley
And we did. The weekend festivities stretched far into the week, with a double opening at both Salon 94's downtown locations. Tiger Tiger, a vibrant group show at the Bowery location featuring Michael Asif, Yutaka Sone, Katherine Bernhardt, Nikki Maloof and more, took us on safari with the jungle-themed works of our dreams -- complete with mojitos. Eventually the crowd moved around the corner and down a narrow street to the Freeman Alley location, where LA-based artist Amy Bessone's large ceramic female torsos and Matthias Merkel Hess's utilitarian pottery buckets gave a sudden, and necessary, sobering. It was a reminder that after all this fun, it was time to go home.