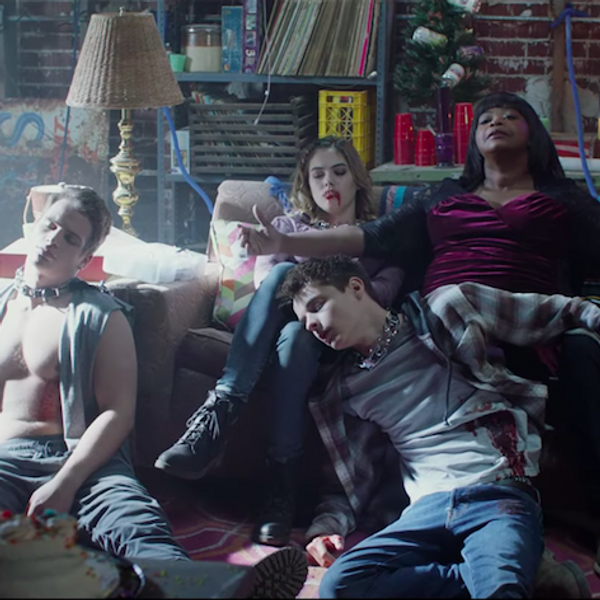 Remember how a bunch of white girls terrorized Octavia Spencer in The Help, demanding she raise their children and help them with their journalism projects? Remember Spencer as the doting, nurturing mammy, whispering to little Mae in that sweet, gentle voice: "You is smart. You is kind. You is important?” Do you have that image nice and vivid in your mind?

Produced by Blumhouse, aka the production company making everything worth watching in horror these days (Get Out, Cam, Happy Death Day, Sinister), Ma follows the story of a group of small-town teens who are just looking for a place to party and make-out. They meet Spencer at a liquor store, where they ask her to buy them some booze. Spencer invites them to come drink in her basement."You guys wanna party like rockstars? Follow me," she promises.

Per horror movie logic, the kids accept this very normal, unsuspicious offer, and her basement soon becomes the hottest party spot in town. Ma becomes their hero and nightlife guru: She takes shots. She does the running man.

As always, the one astute girl gets suspicious about Ma, as she gets increasingly obsessed with the teens: "There's something off about Ma!" Indeed. She comes home to find Ma hanging out with her mom (Juliette Lewis), and realizes that Ma attended high school with her and her friend's parents. The last minute of the trailer is absolutely bonkers: Spencer leaning in for a kiss with one of the boys, Spencer covered in blood, Spencer running over a kid with her car, a boy strapped to a bed as Spencer traces his stomach with a knife.

So, we know kids are gonna die. If I had to guess: Ma grew up in the same small town rejected and bullied by these hot, partying cool kids parents. Now, she seeks revenge for her past trauma. "How does it feel to be on the outside looking in?" she ominously asks the kids at one point in the trailer.

The psycho-thriller was directed and co-written by Tate Taylor — the same Tate Taylor who wrote the notoriously white-washed history of The Help. It seems that Taylor and Spencer have united to provide cinematic justice for for the former film: as the Hollywood Reporter points out, violent, manipulative, terrifying Ma is the anti-mammy.

We and the internet can't wait to see Spencer mess with some white kids for a change. Luke Evans, Juliette Lewis, Missi Pyle and Allison Janney also star in the film, out March 31.

This just might be my favorite @octaviaspencer role ever. I love this new space being created for black leads in bi… https://t.co/8OtaMkm7f5
— Chris Witherspoon (@Chris Witherspoon)1550082472.0