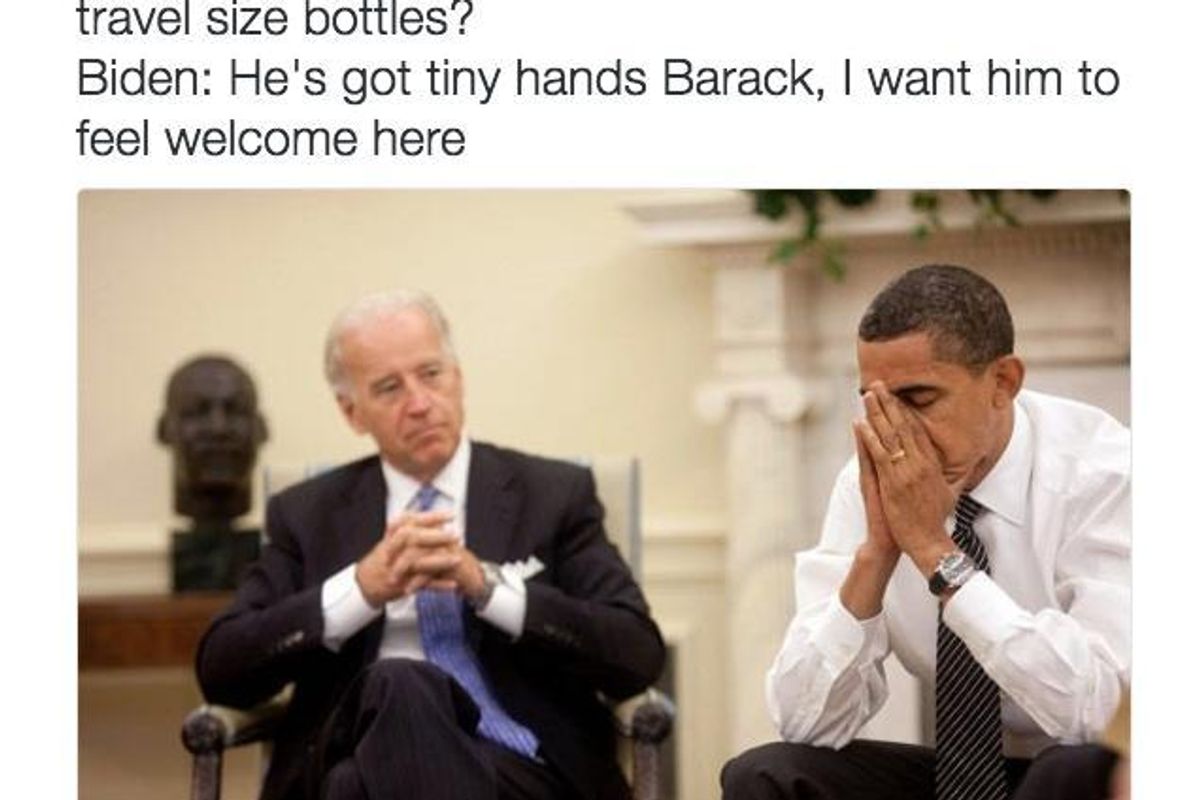 As Barack Obama's eight years as President of the United States draw to a close, the Internet-at-large has begun thinking about what sort of funny conversations Barry and Diamond Joe could be getting into as they prepare to hand over the Oval Office to Donald Trump and Mike Pence.

Following the depressing results of last week's presidential election (and perhaps spurred on by Biden's amazingly petty sign of the cross moment), many memers have begun capitalizing on the fun-loving duo's personable public images, with Biden acting as an impish instigator and Obama as a more measured, adult-like figure. Faced with the realization that our first black president will be directly followed by a man openly endorsed by the KKK and other white supremacist groups, many memers have sought temporal mental refuge in imagining what jokes, pranks and hi-jinks those two could have been plotting about during all those photo opps. And they've proven so popular that there are even several "Biden & Obama" parody accounts for all your buddy memes.

And while most of these memes may just be "an illusory escape from the public's feelings of utter powerlessness and uncertainty right now," as @postcrunk aptly pointed out, if you want to take a smidgen of bittersweet comfort amongst all this abject horror, we won't tell. Check out a few of our favorite "conversations" below -- it's sure as hell the first time we've smiled since Tuesday.

Obama: Did you replace all the toiletries with travel size bottles?
Biden: He's got tiny hands Barack, I want him to feel welcome here pic.twitter.com/e7NRIZ43Ww
— Josh (@jbillinson) November 11, 2016

Biden: I took a Staples red button & wrote "Nukes" on it

Biden: I gave him the wrong address

Biden: Hillary was saying they took the W's off the keyboards when Bush won!
Obama: Joe put-
Biden: I TOOK THE T'S, THEY CAN ONLY TYPE RUMP pic.twitter.com/D6Vh7Zu429
— Josh (@jbillinson) November 13, 2016

Biden: I painted "Michelle Obama 2020" on your bedroom ceiling

OBAMA: Did you have to say you loved Trump's sons in Twilight?

Biden: I changed the White House WiFi password to "BabyHandsMan1"

Obama: So, who's funeral is this again?

Joe: I hid all the pens from Trump
Obama: Why?
Joe: Because he bringing his own.
Obama: ???
Joe: HE'S BRINGING HIS OWN PENCE pic.twitter.com/uni3WUd4X3
— The Hashtagonist (@TheHashtag0nist) November 12, 2016

Joe: I will not stop. This room will smell so bad when he gets here.

Biden: can i put whoopee cushions under all the chairs before he gets here

Obama: joe im on the phone