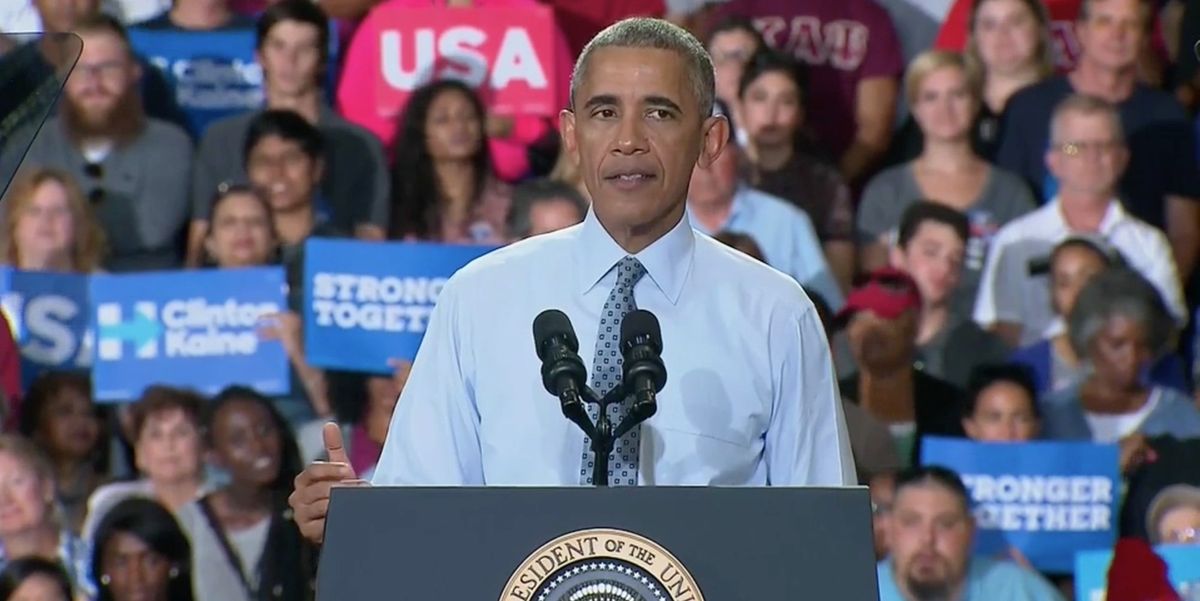 Obama Calls On Men To Check Their Sexist Biases Before Voting

In a rally for Hillary Clinton in Columbus Ohio, President Obama continued his long kiss goodnight with American progrssives, asking the men in the crowd to take a good long look in the mirror and reflect on institutionalized sexism before hitting the polls. He began, "You know, there's a reason we haven't had a woman president before," and that it seems "we're still trying to get over the hump." He then alluded to the boundless opportunities he wanted for his daughters, and got his biggest applause line of the entire event when he said that Michelle was "not only his equal, but his superior" (we know). He continued:

"I want every man out there who's voting to kinda look inside yourself and ask yourself, if you're having problems with this stuff, how much of it is that we're just not used to it? When a guy is ambitious and out in the public arena and working hard, well that's okay. But when a woman suddenly does it, suddenly you're all like, well, why's she doing that? I want you to think about it, because she is SO much more qualified than the other guy."

He continued by praising Clinton's record saying, "She has conducted herself so much better in public life than the other guy. This notion that it's hard to choose? It shouldn't be!"


His speech in Columbus echoes the themes he brought up earlier this week in a charming Halloween interview with Samantha Bee. After he got some good dad laffs in about Samantha Bee's Millennial impression, he discussed his thoughts on the sexism Hillary will inevitably face when she takes office. Samantha asked him what the Hillary Administration equivalent to the Birther Movement would be, and he replied. "I think the equivalent will be: 'She's tired. She's moody. She's being emotional." He continued:

"When men are ambitious, it's just taken for granted. 'Well, of course, they should be ambitious,'" he said. "When women are ambitious, 'Why?' That theme, I think, will continue throughout her presidency, and it's contributed to this notion that somehow she is hiding something."