It was 5pm and thirty minutes outside of Marrakech's center, a hundred or so Instagrammably dressed twenty-and-thirtysomethings could be found lounging in a pool, doing yoga or sipping cocktails while swaying to a set by Barcelona-based Moroccan DJ Monile. Nearly twelve hours later, the crowd would still be there, swelled to several thousand, dancing to sunrise during sets by Seth Troxler, Chromeo and Amelie Lens.

In between those twelve hours, these revelers sampled an array of sounds, sights, tastes and experiences that may have included everything from trying local dishes like babbouche (Moroccan snail soup), getting glittery Euphoria-style makeovers and scoping out photographs and fashion designs from some of today's leading contemporary African artists and designers. It was all part of Oasis, a boutique-sized music festival held in Marrakech, Morocco earlier this month.

The fest, which just capped off its fifth year, is the brainchild of Marjana Jaidi, who has managed not only to create a singular kind of festival experience in Morocco but a singular kind of festival experience — period. True to its name, the festival felt like a dreamy respite from the hustle of the city (not to mention the mundanities of workaday life), held on the grounds of the five-star Fellah resort. Amidst shimmering Moroccan lanterns, palm trees and swimming pools, a crowd that skewed slightly older and more international than most festivals (intentionally so, as Jaidi shared with us previously) alternately raged and relaxed, let loose during DJ sets and lounged on oversized pillows and Berber rugs.

Perhaps because of the spectacular setting or perhaps because of the crowd's maturity or perhaps because of something else, the festival never felt like the antic, exhausting scene so often encountered at others, where frenzied packs of FOMO-fearing college kids are often seen rushing from one stage to the next, crushing beers and who knows what else in their quest to have the. most. epic. festival. weekend. ever. Instead, Oasis felt epic enough as it was, and attendees could just chill, soak it all up and stay in the moment, without worrying too much about what they were missing at the stage down the way. 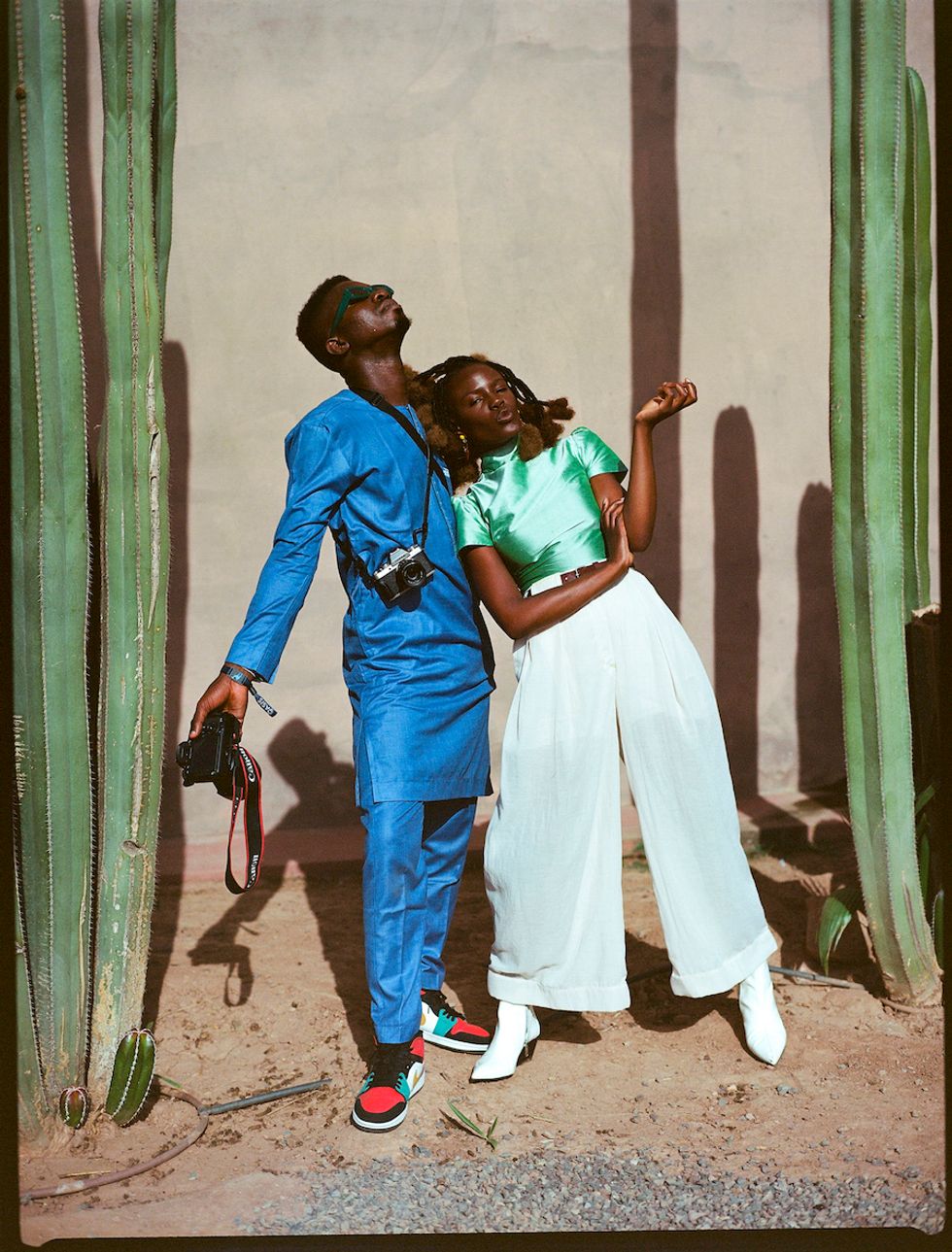 Along with a more international crowd than you might find at most music festivals (attendees hailed from places like South Africa, Brazil, Spain, the U.S., France, Morocco, Nigeria, Netherlands, UK and more) came more varied festival fashion. Instead of the usual crop tops, jorts and neon tank tops you routinely find elsewhere, there was a smorgasbord of style, often reflecting nods to concertgoers' heritages and nationalities. There were dashikis and djellabas, patterned short and shirt sets, fezes, head chains and all sorts of other eye-catching accessories, prints and beauty looks.

Three of the most stylish dudes at the fest were Sam Lambert and Shaka Maidoh from art and fashion collective Art Comes First and their friend Amah Ayivi, who runs Parisian vintage hotspot Marché Noir. Together, the trio collaborated with MACAAL (the Museum of Contemporary Art Al Maaden), one of Marrakech's premiere contemporary arts institutions, on a multi-functional pop-up space, Mbari House, which featured an art gallery displaying works by artists like Hassan Hajjaj and Malik Sidibe, fashion designs from local designers and sets by Sampha, Walshy Fire, Shinghai and others. Clad in all black with an impeccable selection of jewelry and accessories, the trio — and the space they helped curate — seemed to personify the festival's overall vibe as a cultural marketplace where sounds, styles and ideas could be exchanged.

Of getting their own inspiration from the fest, Lambert told us that he saw "a lot of young guys with cool shirts and cool combinations of colors...There's also that contrast between [a look] that is very traditional and another that's so modern and stylish. We saw a guy yesterday who was wearing some cool sneakers, shorts and a djellaba. Normally a djellaba is longer but he pulled the djellaba all the way up and he tucked it into his waist but it looked so cool... I wanted to remember it for future [designs]." He continues, "There was an old man [at the festival] making juice and he had a really cool fez hat and he's wearing the latest Louis Vuitton eyewear and he's in his 60s... I think if it wasn't for the festival, we wouldn't be able to see [these styles] all alongside each other." 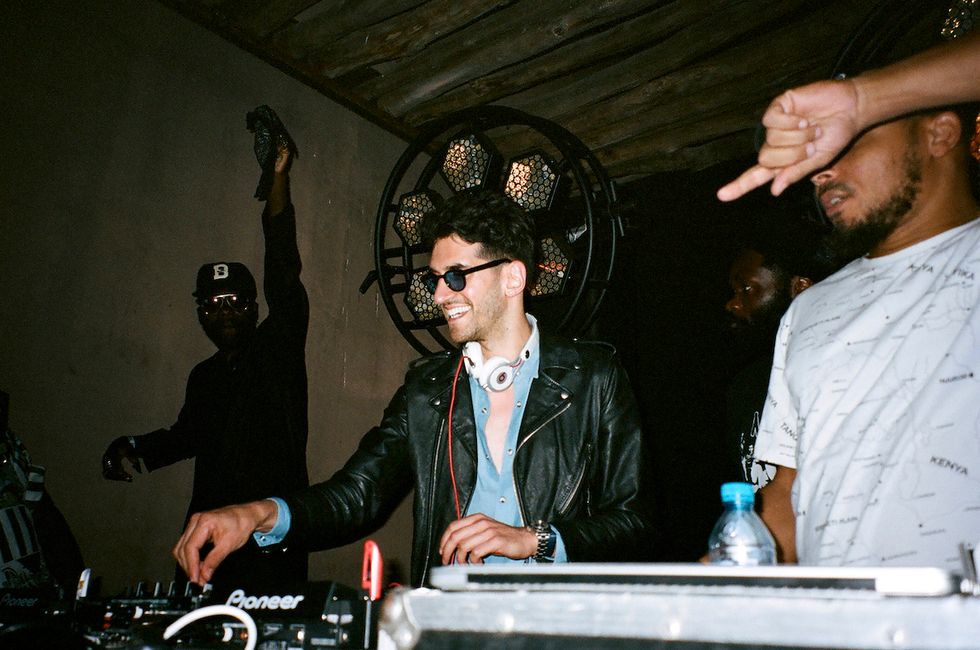 The music at the festival emphasized dance, electro, techno and house, featuring big name DJs like Seth Troxler, Four Tet and Moodymann alongside up-and-coming artists like Shinghai, Mall Grab, Mozghan and more. There were a number of Moroccan artists, including Amine K — "Morocco's dance music godfather" — as well as rising acts that played as part of Casablanca-based label Casa Voyager's showcase. Of the opportunity to introduce their roster to an international crowd, Casa Voyager's label head Driss Bennis, says that "Oasis is providing a good platform as it allows local artists to show their skills and taste to a bigger international audience. It actually doesn't feel like we are in Morocco, as [Oasis] has nothing to envy [about] big European festivals, which makes [Oasis] a good place to build a strong network and cultural exchanges between Moroccans and foreigners." He adds, "Oasis adds a professional and reliable platform for us, as a label, to express ourselves," continuing that Morocco's unique geographic and cultural vantage point, reflected in its artists' creative output, "is a place full of paradoxes, stuck between tradition and modernity, between Occidental and Oriental. It gives us a special view on the world, which is reflected in our craft."

Alongside these dance music names were DJ sets by artists known more often for their live shows — artists like Chromeo, Sampha and Walshy Fire, among others. One of the festival highlights — and a last minute surprise addition — had to be Mos Def's (aka Yasiin Bey's) intimate set to a crowd of only a hundred or so people at the small Mbari House outdoor space. A friend of the guys at Art Comes First, he got onboard after getting a text from the duo. "We were like, 'Hey, we're in Marrakech.' And he's like, 'Dude, I love Marrakech.'" Lambert says. "He was one of the first guys to say, 'You have to go to Marrakech. The people here are really up for collaborating.'" And so it was that Mos Def found himself returning to Marrakech for yet another collaboration. 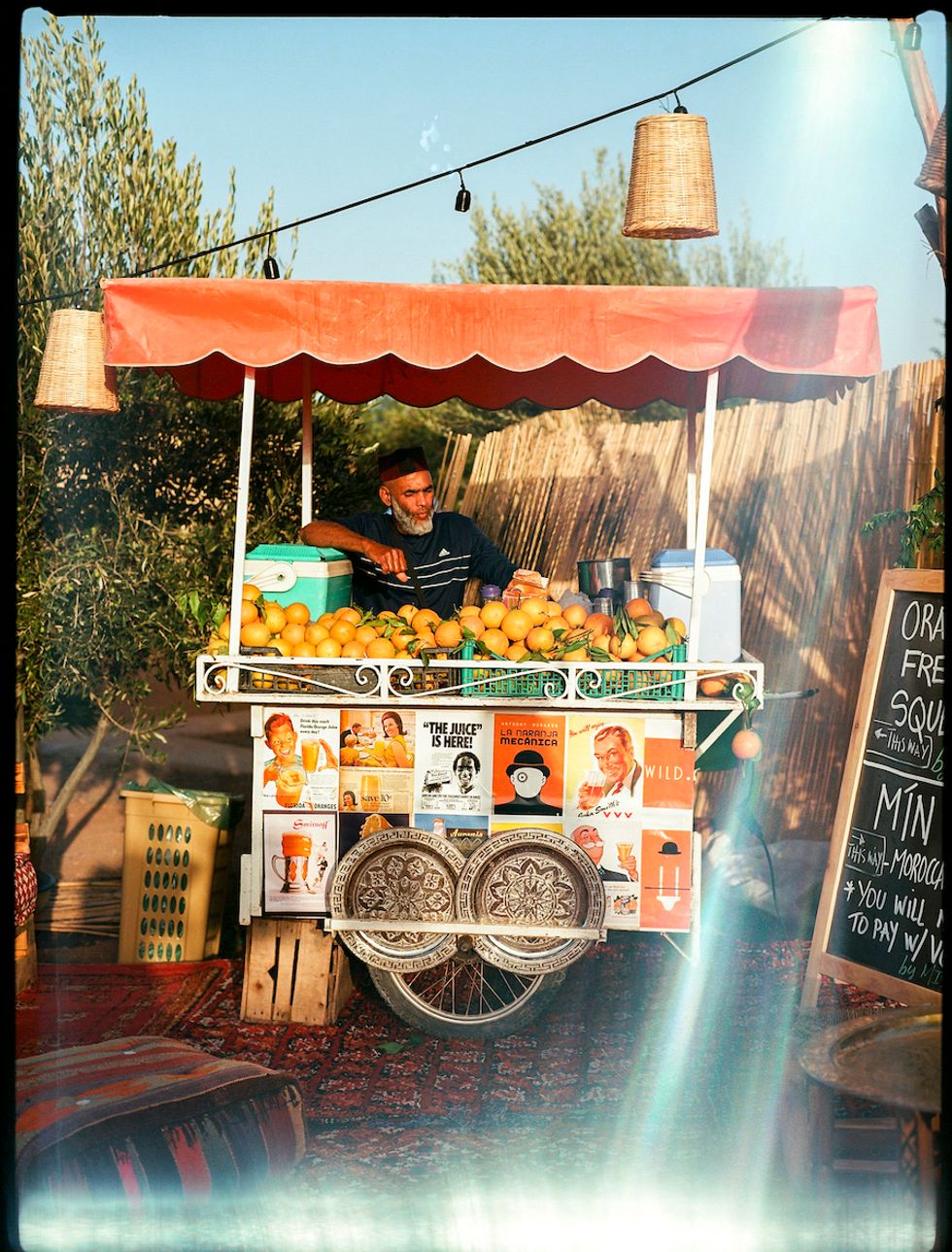 While the photogenic Fellah resort grounds were enough to make the festival feel special on its own, the organizers didn't stop there and enhanced the setting with unique spaces throughout including a Moroccan marketplace where guests could eat traditional Moroccan cuisine, get henna and chill on large pillows and rugs; a secret garden where you could find a champagne bar (an Oasis tradition) and cocktails by one of Marrakech's coolest bars, Baromètre; hookah lounges; a beauty bar; art installations by UK art collective Squidsoup; and the Mbari House.

The Mbari House felt, in many ways, like the perfect distillation of the festival. As Ross Gardiner, Oasis' Media Director, puts it. "The Mbari House felt like we started to embrace Morocco's position as the gateway to Africa. That was represented in the art from MACAAL's collection, the clothing from Art Comes First and Marché Noir, and the music programming." It was also the space to find some of the most high-energy and intimate shows of the weekend and a place where guests danced with abandon, interacting with one another as if they were at a house party and not just facing forward, eyes glued to the DJ booth.

And, according to Gardiner, Mbari House was also a glimpse into the festival's future and the types of experiences and directions yet to come. "Oasis has always been rooted in underground house and techno, so to have live hip-hop and pop acts like Issam, Shingai, and Yasiin Bey [at Mbari House], was very new for us, and we weren't sure how it was going to resonate with the dance heads. But Mbari was fizzing all weekend, and it really felt like the place where Morocco, Africa and the world collide. You're going to see that intersection being explored further in the coming years, and I think it'll broaden the creative scope of the festival significantly," he says.

Given all they've been able to accomplish in only five short years, it feels safe to say that exciting things are on the horizon for next year and those to come. Count us in.

Yungblud Is Livestreaming His Concert