Hell No the Memo: NYC Rallies for Trans and GNC Rights

The New York Times reported a leak memo over the weekend detailing the Trump administration's consideration of a policy that would effectively end federal recognition and protection of trans, nonbinary and gender nonconforming identities.

Specifically, the Department of Health and Human Services seeks to change Title IX definitions of gender to only recognize male and female sex, "on a biological basis that is clear, grounded in science, objective and administrable." Practically speaking, this means gender would be defined as male or female based on genitalia recorded at birth, and any individual seeking to be identified as otherwise would require DNA testing.

The effects of such a policy would limit access to (or deny completely) health care, housing, other public services and protection from discrimination for over one million Americans. The untold implications of what it would mean for the government to strictly define gender based on genitalia and blood testing is simply unacceptable.

LGBTQ people and allies are already working together to protest this memo and prevent it from becoming a reality, rallying in outrage on social media and in person. Voices4 and Lambda Legal held a "Hell No to the Memo" rally last night in Washington Square Park with an array of speakers standing up for trans and GNC rights.

Related | Here's How to Help Trans and GNC People Now

POSE FX's Indya Moore addressed the crowd, saying, "There is a spiritual war. It attacks our hearts, our souls and most importantly our bodies," adding, "We are at the mercy of someone's political opinion and that is not okay. It's never okay for the fundamental rights of human beings to be up for debate."

The speakers tended toward fighting hate with love, a common message in LGBTQ civil rights campaigns throughout the years that was no less present last night than in past decades. They also made it clear that the community and its allies will continue to fight fiercely for their human rights. "If a black girl like me can get out of the ghetto in Zimbabwe and refuse to be silenced then so can you," intersex advocate Tatenda Ngwaru said, while ACLU lawyer Chase Strangio said, "You can't erase people from the system with the law. We will fight in the courts and hold back the line, but the real transformative power is with you."

See photos and more quotes from the rally below, and learn what practical steps you can take to prevent this memo from becoming law here: 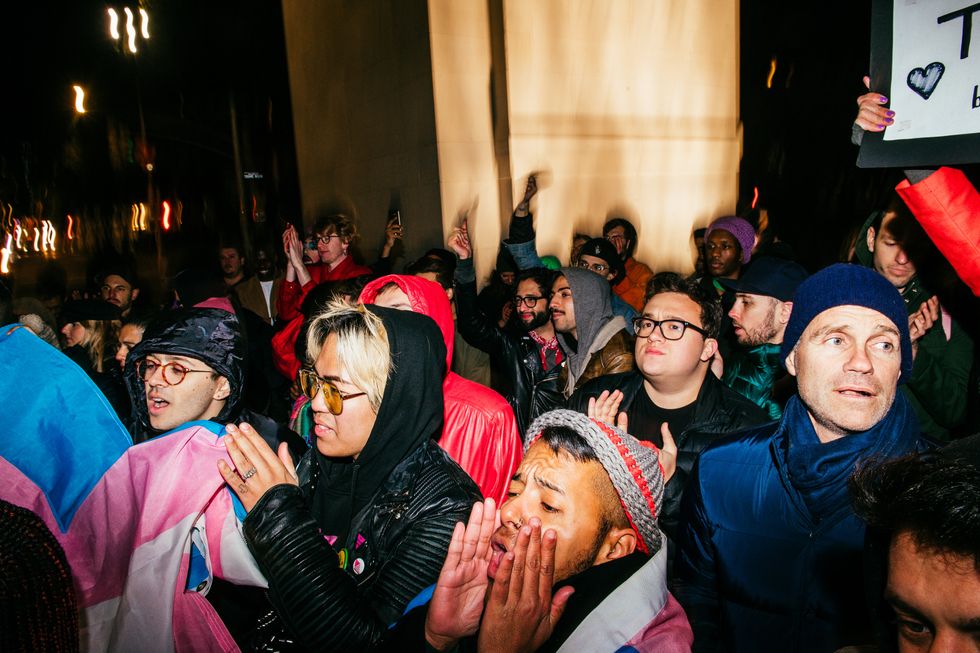 "We must fight narcissism with humility." -Indya Moore