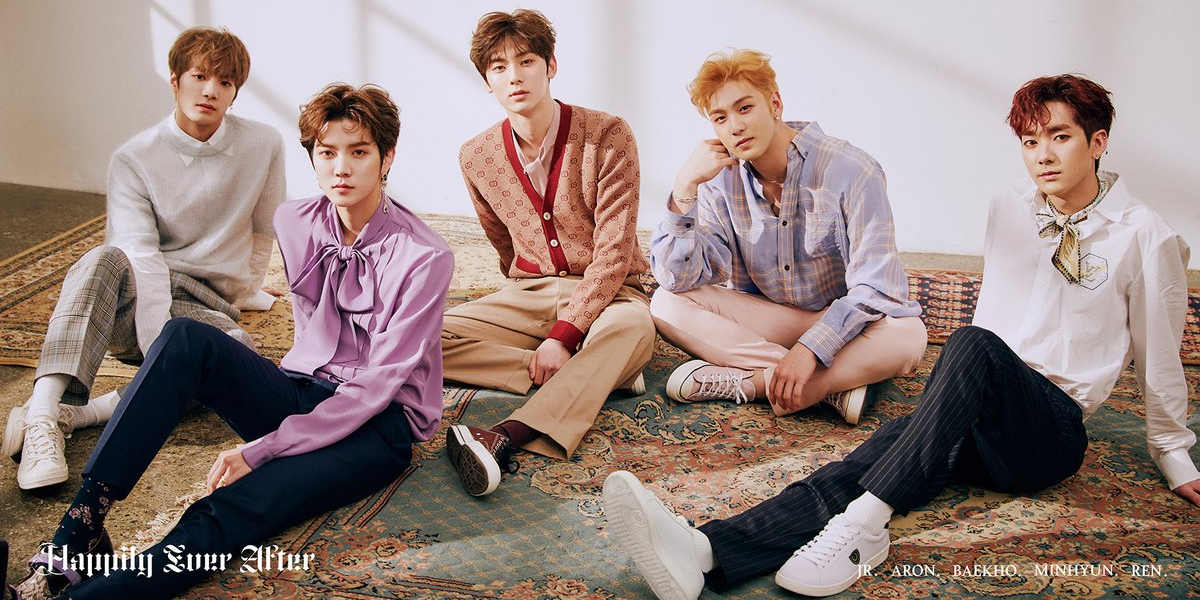 NU'EST on KCON, Fans and the Future

As the sun sets on a picturesque view of New York City, the sky is mottled with various hues of red, purple, and yellow. Glittering skyscrapers cling onto the last rays of sunlight, yellow-tinged street lamps flicker, and the Hudson River churns with life.

This is the backdrop for NU'EST's first performance at KCON New York, a duet by members Minhyun and Baekho of "Lost Stars" from the film Begin Again. It's an apt song choice for the group considering that, much like the protagonists of the film, NU'EST's passion for music has created a new beginning for them too.

Two years ago, JR, Ren, Baekho, and Minhyun swallowed back tears and their pride as they stood on stage in front of colleagues and wide-eyed trainees to audition for the survival music program Produce 101. It was a move that shocked the world; Produce 101 typically recruits trainees from companies who haven't debuted yet, not veteran idol groups who had debuted five years prior. With disbandment looming overhead, NU'EST admitted they weren't ready to let their dreams slip through their fingers, and that Produce 101 was their last hope.

Related | Holland Is the Future of K-Pop

While the entire group made it to the finals, only Minhyun was selected to be part of the show's supergroup Wanna One. As a result, the remaining members of NU'EST formed the sub-unit NU'EST W, a shortened form of 'NU'EST Wait', and began releasing albums that would crack the top 10 of the Billboard World Albums chart. Five years after their debut in 2012, NU'EST's tenacity and talent was finally being recognized.

Flash forward to the present and the five members of NU'EST — Baekho, JR, Ren, Aron, and Minhyun — flit effortlessly through a set list of knockout singles as they headline the first night of KCON New York in Madison Square Garden, achieving a dream that once felt like fantasy.

"NU'EST was also like lost stars," Minhyun reflects during the concert, "and our fans have guided us here."

Dressed in matching deep blue ensembles and polished black shoes, NU'EST has a very regal, sophisticated quality to them. As they perch on their chairs and the interview begins, however, their personalities poke through, like the body roll Ren does when he explains that the next concept he wants NU'EST to try is: "sexy!" He immediately apologizes and bows, but Baekho and Aron are already laughing, while Minhyun and JR share a lovingly exasperated look.

"I think we're still heavily debating on what we should do next. There are no plans as of yet, but we talk about it amongst ourselves," says Aron. He points to Baekho. "He makes a lot of our songs, but as of right now, we have a tour coming up so we're more focused on that."

The group is currently on their first tour in six years, with multiple stops all over Asia including Seoul, Hong Kong, Jakarta, Singapore, and Taipei. Minhyun calls the Seoul concerts "a very memorable experience," explaining: "because it was our first tour in Korea and a lot of fans showed up, it left a deep impression on us."

Though there aren't any confirmed plans, American tour dates are also on the group's mind. "If the opportunity presents itself obviously yeah, we'd love to come to the States," Aron replies.

NU'EST's latest album, Happily Ever After, is their first as a full team in over two years. All five members of NU'EST have a history of writing and composing music, and Happily Ever After is no exception; the album is written and composed almost entirely by Baekho and JR, bar Minhyun's solo single "Universe."

So, which song are they most proud of? "It's hard to choose just one," JR hedges. "All of the songs that we've written directly have a deeper meaning to us because we wrote it. It's a little different from how others will [perceive] the song [and] how we'll see it." He does mention, however, that he feels proud that fans enjoy the songs he writes.

Upon release, Happily Ever After shot straight to number eight on the Billboard World Albums Chart, and with over 250,000 albums sold in Korea alone, NU'EST achieved their first win with the single "Bet Bet" on the music program Show Champion seven years after debut.

Related | ATEEZ on Tour Life, Getting Along and Listening to Their Fans

"Even though it took quite a bit of time to get that first place, we think of that time as very precious to us because that was the time we spent with our fans," JR explains. "It's that time where we grew and earned that first place, so we're sharing that moment and that journey with our fans. It's because of our fans that we're first place and here today, so we just want to take that love and give it back to [them]. We're really appreciative."

Since their first win as NU'EST W, the group has upheld a tradition of releasing a choreography video after each win in hilarious, yet often horrifying costumes (see Aron as 'The Gronch' in "Help Me" and JR as Dobby in "Bet Bet").

When asked if they have any ideas for costumes for their next win, Baekho perks up. "I have one!" He reveals. "A throwback to when we first debuted! I want to do a cosplay of that." That, of course, being a reference to the school uniforms, spiked hair, and bright colored shoes they wore in their debut single "Face." While Aron and Ren feign interest, JR looks positively sheepish at the thought.

As the members prepare for their performance at KCON, they mention that they've been listening to all the artists in the lineup. According to Ren, there's one artist they'd be interested in collaborating with in the future. "We've collaborated with Seventeen before," he muses, referencing their single "Heaven." "If the opportunity arises, we'd like to collaborate again."

As NU'EST turn over a new leaf of success, prosperity, and recognition, all five members still keep a humbled, grounded look at the road ahead of them.

"We don't really have a big or grandiose dream [for the future], it's more of taking the moment as it is," says JR as he gazes at each of his members, who all lean closer to hear his thoughts. "I hope that we can all — as five and as one — continue to grow and promote together. That's my dream."