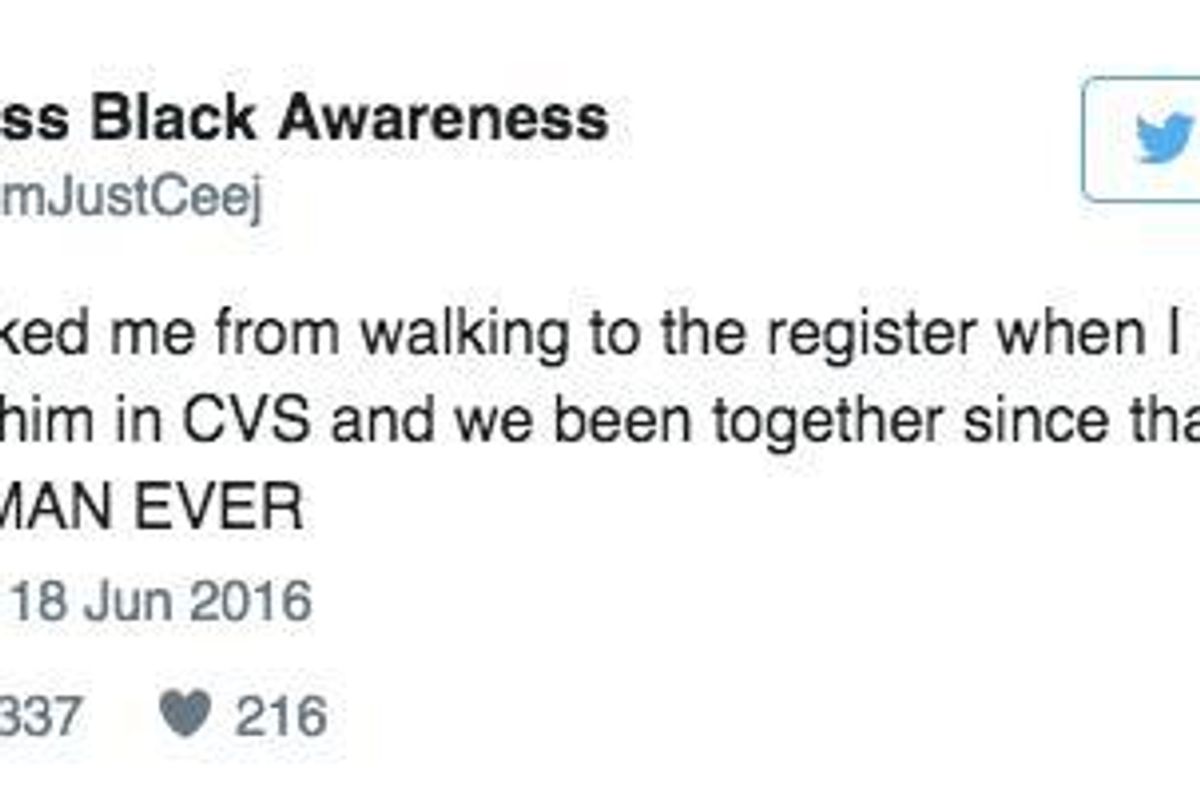 "I started It Out of Sheer Frustration:" We talked to the Creator of #NoWomanEver, the Epic Tag Using Snark to Combat Street Harassment

Women are taking to Twitter tongue-in-cheek to share stories of street harassment -- whether it consist of stalking or catcalling -- using the viral #NoWomanEver tag.

I was a lesbian, but after he told me that I was too pretty and that he could change my mind, I couldn't help myself! #NoWomanEver
— ShinyBlackGirl (@ShinyBlackGirl1) June 18, 2016

"Sexual harassment is a confidence boost! I love being reminded that my self-worth directly correlates to my appearance!" said #NoWomanEver
— Orange Coat Girl (@orangecoatgirl) June 18, 2016

I was on the fence when he kept talking about my body, but I definitely got his number after he said I was ugly anyway #nowomanever
— Akilah Hughes (@AkilahObviously) June 18, 2016

This guy asked me to hookup, I said "no". Then he said "I know you want it", so obviously I changed my mind instantly. #NoWomanEver
— ❉Mother Gucci❉ (@its_queentay) June 18, 2016


Started on Saturday by a 37-year-old Atlantan named CJ, the tag tackles the presumption that hitting on a stranger should always be interpreted as a compliment -- rather than the flat-out, dehumanizing and potentially fear-inducing harassment women are forced to accustom themselves to. After all, the idea that "it's just a compliment" ignores the fact that the act of hitting on strangers is actually a fucked up power move that reaffirms women's bodies as public domain and also tends to induce paranoia re: safety, as sometimes (as a few user pointed out) it doesn't just stop at a "Hey, sexy."

He followed me into my building after yelling at me for blocks. I realized then he was the man for me and let him into my apt #NoWomanEver
— Lil Freedia (@antinewblack) June 18, 2016

"I wasn't attracted to him. I politely declined his number. But when he followed me off the bus? 😍😍😍" #NoWomanEver
— jamilah lemieux (@JamilahLemieux) June 18, 2016

I found it so flattering how he catcalled me, then followed me to the train during my 8 AM commute that I rewarded with a date. #nowomanever
— Sam Escobar (@myhairisblue) June 18, 2016


"I started the hashtag out of sheer frustration, I cant even lie," CJ told us via email. "There was a conversation on my timeline about street harassment early Saturday morning, and a lot of the men engaging were being obtuse and dismissive...the women were crying out, once again, about being intimidated and disrespected, and the guys were pretending that it wasn't a valid concern."

As such, she decided a little snark was in order, and could potentially help women feel empowered...even if the stories were at first "incredibly triggering for me."

"These women have gone through a lot of disgusting and inappropriate crap that they should never have to experience," she continued. "I kept reading through the tag all day Saturday, and I realized something powerful was happening."

Though as CJ herself astutely noticed, it seems to be a never-ending cycle...

They crazy part about #nowomanever is the number of men who have entered my mentions harassing me about how they never harass women. 🤔😭
— Miss Black Awareness (@ImJustCeej) June 20, 2016