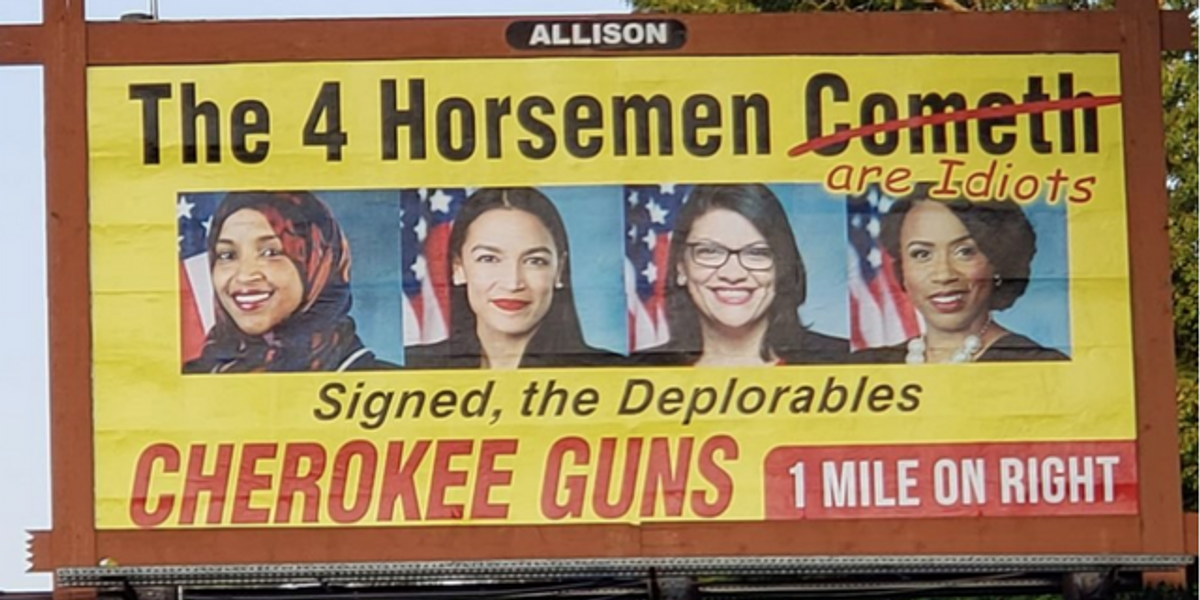 Donald Trump uses Twitter to incite violence against and insult progressive freshman democrats and women of color: Ilhan Omar, Alexandria Ocasio-Cortez, Rashida Tlaib and Ayanna Pressley. His supporters without massive social media followings have now taken to the old-fashioned format of billboards to do the same.

Cherokee Guns of Murphy, North Carolina posted a billboard plastered with the faces of the four freshman congresswomen, calling them "the 4 horsemen" and "idiots." So, to be clear: an ad seeking to motivate people to purchase firearms by provoking anger about individual people. The billboard is signed "the Deplorables," referencing the nickname Trump supporters took up after Hillary Clinton used the phrase.

The billboard surfaces in the wake of criticism the president received after his July 15th tweet, which proposed the four women (three of whom were born in the United State, while Omar is a naturalized citizen born in Somalia) should "go back and help fix the totally broken and crime infested places from which they came." "You can't leave fast enough," he harassed them. That day, the Congresswomen held a briefing disparaging the president's racism. Both Omar and Tlaib called for his impeachment.

Often referred to as "the Squad," two of the four congresswomen responded on Twitter. Pressley called specifically on North Carolina congressman Mark Meadows, an ally of Trump, whose district includes the town of Murphy, and who recently refused to call the president racist following his comments about Baltimore and congressman Elijah Cummings.

"I'm not inciting any violence or being racist," Cherokee Guns owner Doc Wacholz said in a statement to the Citizen Times, via USA Today. "It's a statement. It's an opinion."

When asked why he chose to pair the congresswomen with the advertisement, Wacholz said, "They're socialists, from my point of view. I also feel a couple of them, being Muslim, have ties to actual terrorists groups."

The store also previously paid for a billboard that read,"Give me your tired, your poor... Keep your Syrian refugees."

It remains unclear if Cherokee Guns will be forced to pull the ad, but they've promised to continue selling the graphic in the form of stickers "by popular demand."