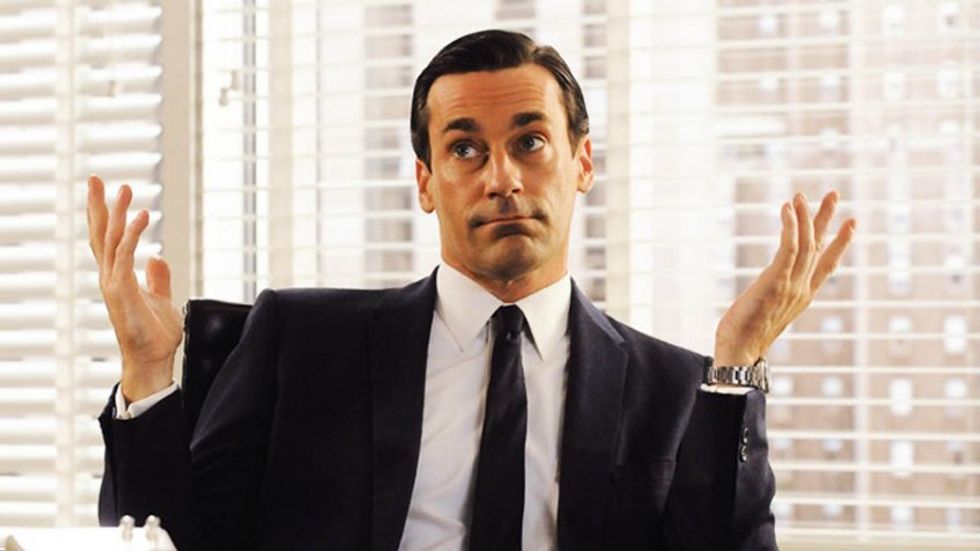 Nope, Don Draper is Not That Dude No One Thought He Was

Eric Thurm
PAPERMAG
The "theory" that Don Draper, Mad Men's drifting hero* and the secret man who drinks at work, would turn out to be infamous airplane hijacker D.B. Cooper has floated around for years. With just days to go before the series finale and yet another round of "definitive" evidence, showrunner Matthew Weiner shut it down for good, telling Macleans' Adrien Lee that there was no way it was happening. He attempted to pin down the nature of the fans' relationship with the show's future:

He's not wrong -- because TV seasons are often more like winding marathons than a more compact film, it's easy to track them and try to figure out their patterns over the course of weeks and years (especially for long-running shows like The X-Files or Lost). In some cases, this makes sense, particularly since many shows ask to be treated as mysteries. But Mad Men? This is a show whose biggest "plot twist" to date is, depending on your perspective, either background information about the main character or a series of events at a workplace that eventually resulted in the main characters simply moving to a different office.

And it's not even the first ridiculous conspiracy theory Weiner has had to debunk -- during the fifth season, there was rampant speculation that Don's second wife Megan would be killed like Sharon Tate (because of a shirt she wore once). Somehow, a show that is often criticized for being boring has incited some of the most fervent, near-Biblical readings of anything in the past few years. Why?

One of the cool things about art is that you can engage in all sorts of interpretations, using very, very specific pieces of evidence. But like the night in Westeros, actually predicting the future rather than trying to understand what something means is dark and full of terrors and encourages showrunners to change course mid-stream, which, while occasionally productive (Doctor Who's last season pulled off the nigh-unthinkable feat of turning the cardboard cutout female companion into a real character), is usually bad for everyone (the entirety of The Newsroom). Maybe that's the whole point. Is Matthew Weiner D.B. Cooper? Is he Jon Snow's father? At the very least, he's one of The Others. Or a Cylon. Or something.
You May Also Like
Music