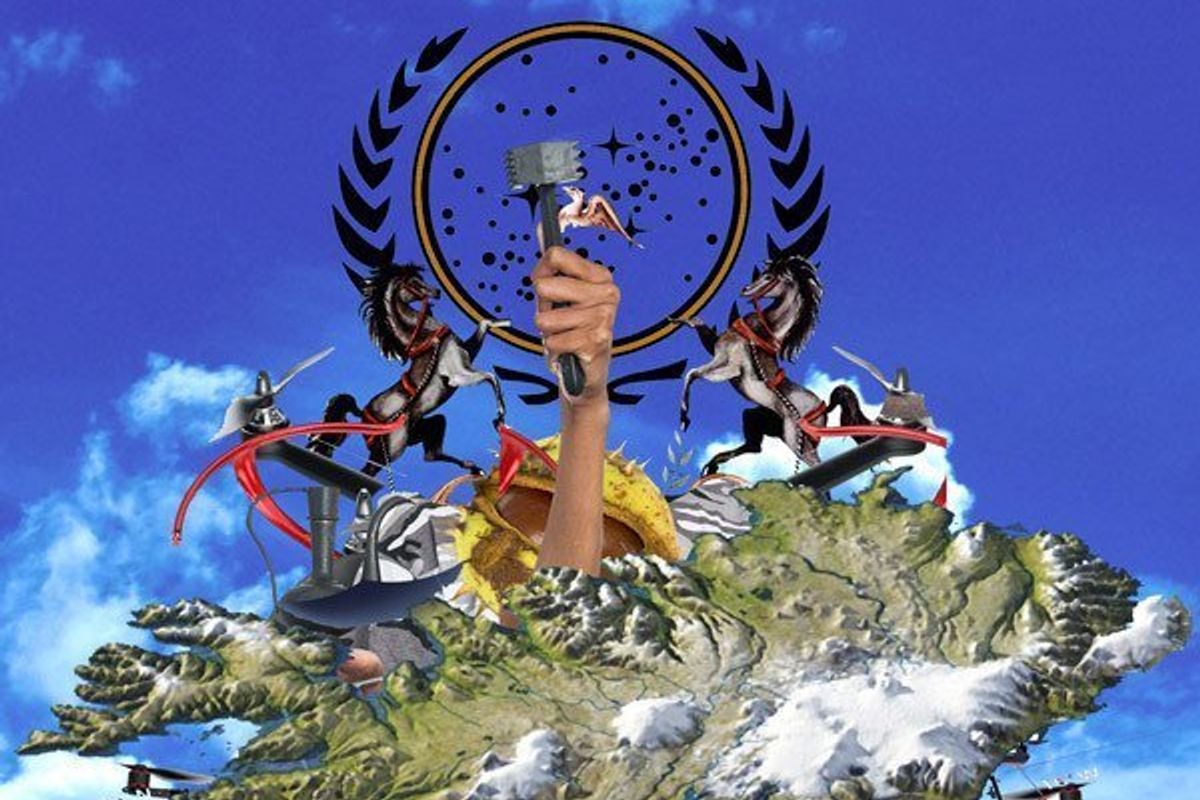 Chino Amobi's now aiming for clarity. After years of toiling away under the enigmatic "Diamond Hearted Black Boy" persona, the Richmond, VA-based tunesmith and co-founder of artistic collective NON Worldwide is finally dropping the mask -- and is celebrating his rapid rise later tonight alongside collaborators Angel-HO and Nkisi with a huge, first-time performance at the New Museum.

Born from parents of Nigerian descent, Amobi's vision with NON was to break down long-standing Eurocentric perceptions of dance and experimental music -- focusing instead on musicians who are either African or of the African diaspora -- and letting the producers and singers have direct ownership over what is theirs, bending music-industry rules that are still largely colonial. It's a political label, for sure, but the music itself sounds like nothing else. After all, "bass music" has become its own blanket term for almost any sort of club music, and while most of NON's output could light the floor up like matches and gasoline, very little of it is easily classifiable or delineated by genre. Because like Amobi's own lineage, NON's music is first generation -- born out of histories and bloodlines given little voice before.

As such, it's intensely satisfying to see how far NON's come in one year. And to celebrate this, Amobi, Angel-HO, Nkisi and Red Bull Music Academy have also organized an accompanying afterparty for the New Museum show in collaboration with Mexico City's like-minded N.A.A.F.I. collective, as well as a "Duty Free Zone" pop-up shop that's happening right now at Red Bull Studios. Before all the festivities though, we sat down to talk with Amobi in his hometown of Richmond about the label's mission, its partners, and its similarities to professional wrestling.

You have posted pieces online (art, essays, etc.) with the singular statement, "NON is a Nation." But the Nation isn't a physical place. How do you curate a vision like that and hold it together, and how does that tie into the idea of "NON Worldwide"?

The state itself is without boundaries. However, we do locate ourselves within specific spaces. For example, at the show at the New Museum, citizens are being issued passports to get into the space. So, in essence, for that night, NON is a space with borders and boundaries. There's an ebb and a flow. There's temporary boundaries that are fluid, so it'll be that for a second, and then at the afterparty it'll switch, and then there will be definite borders. There are certain areas you need passports to travel between, but there still remains that malleability. No border is fixed. It's a paradox: To say "we don't have borders," then have borders within a borderless state. It's part of what we do, and that translates from online to offline and back.

Have you always sought out artists based on their geography? Inversely, are you open and receptive to people who reach out and say, "I'm here, this is my stuff, and this is my experience."

It definitely goes both ways. There's a lot of research and development I've done with individuals who live in Africa (South Africa, Nigeria, Egypt) who I've definitely gone after for their work, specifically. There's also people who've reached out [who have] a mom who is from Berlin and their dad is from the Congo. They've had this experience and they send us the work, and that's dope. For example, Moro, from Argentina, sent us an email and told us about his story in terms of the history of African slavery and its lineage in Argentina and how that was erased from its history, despite how that history affected tango. The rhythm from the drums is often erased in favor of the more melodic European aspect. So, his project highlighted that erasure and also retraced the history and created something new.

There's a lot of whitewashing and appropriation within scenes that come up after a certain amount of buzz. Lineages become trends. It's happening within dancehall, dembow...

That's a whole other story right there. Like the story of ragga getting erased from grime and dubstep.

It's obvious why, but how is NON trying to bring the lineage of your artists, as well as your own, to the forefront?

We try to push it. Our mission [is to redistribute] power to those creators, because oftentimes those artists don't get the cred that they need and are often forgotten, underrepresented, and just get exploited. Somebody else starts making thousands, hundred of thousands, millions of dollars off of their ideas because that power has been given to those people who came and got it third or fourth-hand. It's important for us to proliferate those sounds that they own. It's about ownership as a philosophy.

In that sense, since NON is a team -- united, on a global front -- it's harder for somebody to say "Oh yeah, that lineage is not there." We've been saying that it's there, and we're not being modest about it. There's humility [from person-to-person] but at the same time we're not going to sit here and front that the history of someone's sound does not come from [the producer]. That's a tool that can disempower the individual, so we're anti-that.

A lot of newcomers to NON are usually baffled because the music you usually put out doesn't really have a firm classification as to what it is. You can't slap a name on the sound.

Definitely! That's a way of challenging the perception of classification because usually somebody thinks of African music and they'll hear drums in their head, some chanting. The desert, some lions, stuff like that. So of course there's a lot more going on, and it's important for people to see that because that could help to de-classify the expectations because once the genre is labelled, it's then compartmentalized and broken down. It can lead to exploitation. Classification is another colonial tool. In order to elude that, it's important to be flexible and create these forms that exist outside of classification. It's liberating, in a way, because then they don't [know] how to commodify it. There's a freedom there.

A lot of the people who really got NON when it began are people who don't have that much in the way of formal education.

Yeah, there's not much of an academic crowd. I feel like that comes from the fact that a lot of people who are making music with NON don't have that standard background. No crazy formal education, and a lot of the music instead comes from a really raw space where you don't have to be in a certain socio-economic class for it to resonate with you. The raw spirit, you know, people can vibe from it. You don't have to have read any sort of post-modern texts to be able to jive with it, you know? The stuff that we make, we're talking about people dealing with everyday stuff that isn't given voice. It's very real in a physical space, it's not existing in this ivory tower that's removed from the everyday experience. That resonates.

How do you collaborate with NON's artists and help to see their vision through?

I just try to be as encouraging as possible. I feel like often times somebody will make something and think "aw, man, nobody's gonna feel like this" or "this is not going to be anything," and I can hear just one song and see potential? I'll be like, "Yo, let's get an EP out," because an EP from somebody who doesn't have any formal training [or a backlog of releases] is often [better than somebody who's formally educated and has a few more SoundCloud followers]. That's really exciting to me because from there I can mentor and link them to resources, then we can augment and connect them to distribution. I feel like believing in somebody is so much. Showing somebody that you care is a really revolutionary act, more so than just going out and breaking windows. It's a powerful act.

And that's part of our philosophy: Giving people a chance when others haven't given them chances. It's about identity. Identity and clarity has overlap. If you express yourself with clarity in your identity and people see that, there's a response to it. That starts to become culture. It can be very Machiavellian because somebody can turn it and manipulate it, but if you're doing it in a way that is bringing peace and helping people's lives, you're using your identity to speak clarity into people's lives in a way that is benefiting themselves and the culture. But, you must take care, if you fall deep into this identity where you feel like you come from you, that can be a dangerous place to be.


How did N.A.A.F.I. make its connection with NON?

I had been seeing them pop up a lot in social media and I really respected what they were doing, because it was a team effort in Mexico. The branding, selling their stuff at flea markets, just that bootleg aesthetic. My parents are from Nigeria and I identify deeply with that bootleg type look, and the fluidity between pop culture and the underground, conspiracy theories, and all that stuff that proliferates between all that. I loved their branding. It inspired me to reach out to them.

They were totally with it! The next day they sent me this one gig playlist of all this unreleased stuff. That means a lot to me, for them to just trust like that. I hit them back and said, "Yeah, it would be cool to come out with some merch to come along with it." I like thinking of things in that way: A lot of it comes from playing soccer, or just being a '90s kid, you know? Seeing how things are packaged and marketed, just the roll-out of cultural relics. Then I started speaking with Red Bull and was brainstorming themes for the show, and it just turned into Part 2 of the first mix between us. I like that, in a sense: It's like wrestling. I grew up on wrestling and hip-hop: The sound clashes, the battles, it's all in good sport. Because everybody wins.

For the gift shop, we're doing a collaborative flag so there's a star for each member, and there's a NON side and a N.A.A.F.I. side. So it's all going to be under one flag, so there's unity within the battle.

Are you worried that it's all too easy to get hung up on the aesthetic of these two things? The memetics and trends. It undercuts the emotional and personal stories behind what all of you do.

That's a caveat that always has to be safe-guarded against. It's important to keep the integrity of the label and to stay true to your mission because when you stay true and the music continues to hold up and the philosophy continues to hold up, then there won't be a threat. As long as you don't make stuff disposable, and a lot of the time micro-cultures can be just that. I don't consider us a micro-culture. We're an art collective, a platform. We have long term missions where the aesthetic is architecture for that, but it's really about our connections and interactions with one another that what will sustain NON over time.