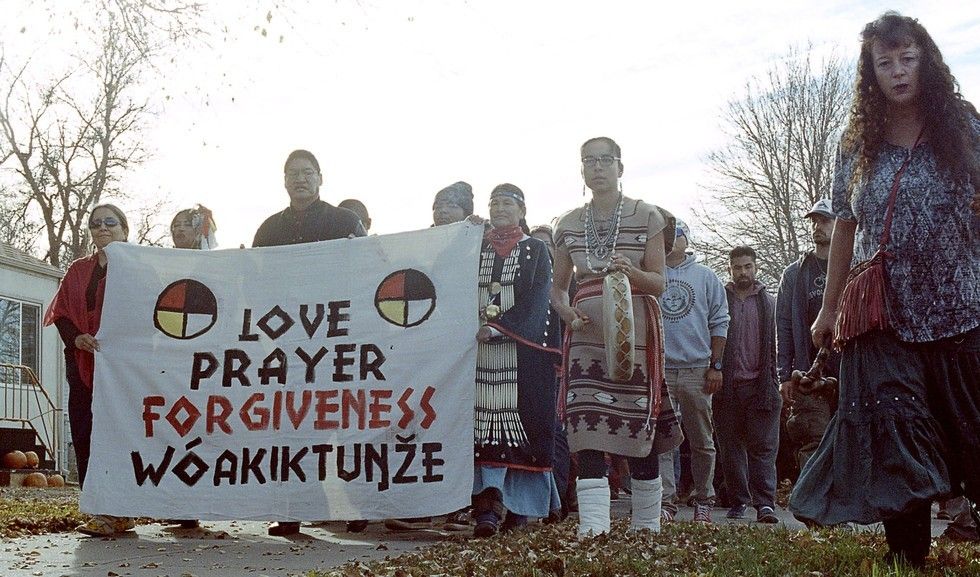 It began around 6pm CST when a group attempted to clear the police-erected barricade on Backwater Bridge, which provides a direct route from Bismarck to the Standing Rock Reservation and has been blocking emergency personnel from reaching the area in a timely manner since October.

"The purpose of this action was to do something to remove that barricade because it's dangerous," Begay, a Tesuque Pueblo and Diné protester, told The Guardian. "That barricade poses a danger not just to everyone at the camp, but also to Cannon Ball and other communities that are south."

However, after protesters lit fires in an attempt to keep warm in the freezing temperatures, the Morton County Sheriff's Department began using water guns to "put out" the fires in the "ongoing riot" -- despite videos showing continuous streams of water aimed at sites with no visible flames.

When police sprayed people with water canons it was so cold their clothing froze on their bodies. The ground was covered in ice #NoDAPL
— Ruth Hopkins (@RuthHHopkins) November 21, 2016

"As medical professionals, we are concerned for the real risk of loss of life due to severe hypothermia under these conditions," the Standing Rock Medic & Healer Council posted on Facebook. "We call on the Morton County Sheriff's office to immediately stop the potentially lethal use of these confrontational methods against people peacefully assembled."

Now is when the Standing Rock Sioux need your help more than ever. Donate much-needed supplies and resources now.