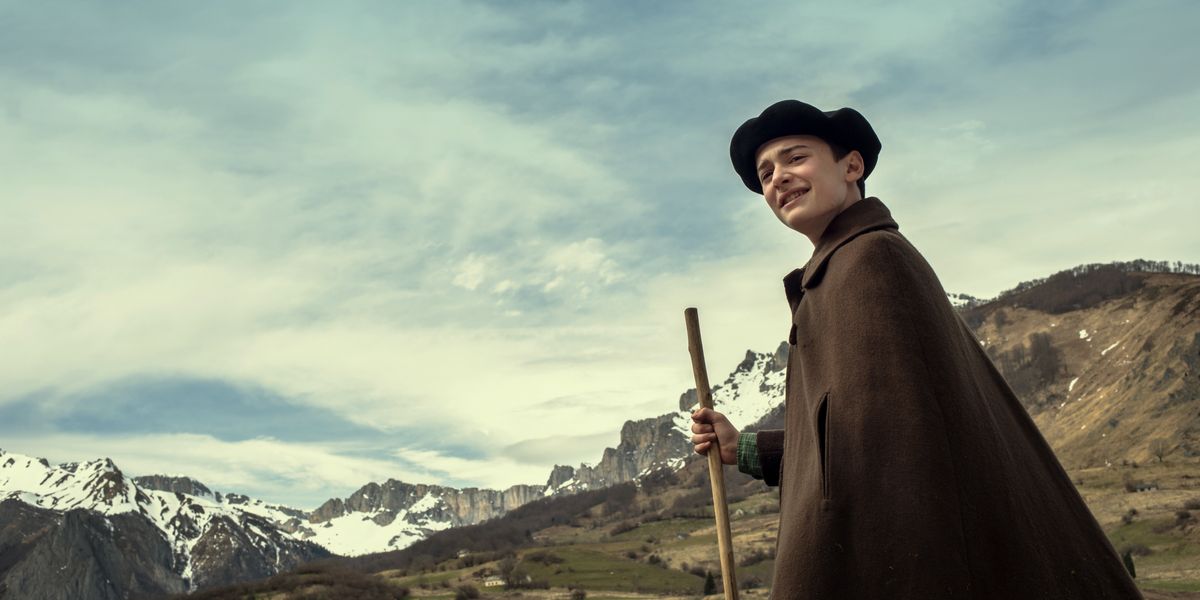 Noah Schnapp on His New Movie and What's Next for Will

Noah Schnapp is only 15 years old, but he's already a star. As Will Byers, he's been the center of Netflix's smash it Stranger Things for the past four years. Before that, he was getting acting tips from Tom Hanks in 2015's Bridge of Spies. Now comes his first starring movie role, as shepherd Jo Lalande in WWII drama Waiting For Anya.

Based on the children's novel by Michael Morurgo, about a teenager who helps smuggle Jewish children safely out of Nazi-occupied France into Spain, Waiting For Anya is obviously a more serious period piece than the Duffer Brothers 1980s suburbia we're used to seeing Schnapp ride his bicycle through. But he's enjoyed having the opportunity to experiment with different roles. "I like changing it up and not sticking to one genre," he says.

While in New York City, Schnapp spoke with PAPER about how Stranger Things changed his life, the advice he got from Hanks and surviving the Hollywood fame machine.

I remember when I was six years old, I took an acting class just for fun. I loved it, I wanted to try something new and I just fell in love with it. I did it for a few years, and the acting teacher told me, "Oh, why don't you try this out professionally? You seem like you could be good at it." So I was like, "Oh, I should definitely try this out. This might be something I'd be interested in to do it professionally." And I talked to my parents and they were a little nervous about it because we had never done anything like this. They had never experienced any acting, anything in that world. It was all something new that we all tried out together, and I got into it. I did a movie here, I did something there, and all of a sudden here I am now.

What has changed for you since your career took off?

I feel like my whole life has changed at the same time, and it hasn't, too. I still go to school, I'm still a regular kid and I still get to live a normal life, but now I guess I have a career. And now [with] this whole acting thing, I have fans. It's really crazy. I never really would have expected any of it, but I'm just super grateful for it.

What's it your experience been like working on Strangers Things? And who do you hang out with the most of the Stranger Things crew?

It's been a really special thing. We're all like a family. We're always together so much, and it really feels like a true family. I think I'd say I'm closest with Millie [Bobbie Brown] just because we're the closest in age. A lot of them are a lot older than me, but I mean we're all really close. It's hard not to be close with them when you work together for so long. We were together for months on end.

What do you want for your character Will? And what have you learned from playing him?

I hope in the next season [Will] might talk to Eleven more about like his experiences in The Upside Down because I know Eleven went through that too, and maybe they can connect with that. I know also Will had a hand on the back of his neck throughout season three, and maybe they could explore what's going on with that. So there's a lot of stuff that they could do.

Got it. Your first on-screen role was with Tom Hanks in Bridge of Spies. What was it like working with him. Did he give you any advice?

Yeah. That was my first-ever, really, movie experience. It was definitely so special. I learned everything I know now. He just taught me the basics of this industry, this career and just basic things of where to stand in the light. He's also so grounded and is such a nice person. He kind of became my role model after filming that, just because he's so successful, yet he still has remained grounded and down-to-earth. I just really strive to be like him when I'm older.

With your upcoming film Waiting for Anya, what drew you to the movie and your role?

This movie is a World War II film, so it's a period piece. It's something I've never done before with this set in World War II and a movie also about this whole topic. I'm Jewish, so it really resonates with me as well. I was just really excited to play a part in it and be a part of it. And the film is in France, which was really exciting. So, it films right where the events happened, so it was really exciting just to really be like immersed in the story.

Does this role allow you to show off a different side of yourself as opposed to what people have seen on Stranger Things?

Yeah, definitely. I play the main character in this movie, and I get a lot more acting opportunities than in Stranger Things. It's more like an ensemble, and my character [Jo Lalande] is very different. In Stranger Things, [Will is] more introverted, and in this movie he's more courageous and brave and is kind of the hero of the movie, so it was really cool to get to play that kind of character and save the day.

What do you want for your career, and where do you see yourself in the next decade?

Tom Hanks is my role model, and I really just hope to be like him when I'm older. Just really successful and have a lot of experience in different movies, but still stay grounded and a nice person.

What kind of movies do you want to gravitate towards?

I like changing it up and not sticking to one genre. I loved playing characters that aren't like me, so anything that's kind of very opposite than me is a lot of fun to play. It's always been my dream to play Spiderman too.

Is there anything that intimidates you about Hollywood or fame?

Of course. I mean it's still crazy to me now. I never would have expected this life or any of it. It can be overwhelming sometimes, but most of it's honestly very positive, and I have such very nice fans who support me and help me. It's really cool to know that I have supportive fans all around the world and so many people who love this show that I'm lucky to be a part of.

What do you look for in a role?

I really like playing characters who are very opposite from me because it's fun to explore a new character and something I'd never done before. Obviously, I would rather play a character that has more time on the screen.

Do you have any other upcoming film projects following Waiting for Anya?

I filmed a movie called Abe a while ago [and] I did an Adam Sandler film in the past summer, which was definitely the change of pace with comedy. That'll be coming out on Halloween.

Wow. You're busy. You have millions and millions of Instagram followers, how do you manage having such a crazy social media following?

This whole thing is crazy. It's always really hard for me to wrap my head around that so many people follow me and know who I am. But it just feels really good that I have so many supporters. It's really just heartwarming.

Awesome. Do you have any advice for other young actors coming up in Hollywood today and how to navigate the space?

I would definitely just say, if you really are passionate about it then, it's kind of corny, but just really don't give up because that's how you're going to make it. So many people give up so quickly, and if you just keep pushing and stay passionate about it, you'll make it somewhere. Don't let the rejection get to you. Don't take it personally. There's so many different reasons why you may not get a role. It just may not be the right time and place, so keep working at it, and it'll work out for you eventually.