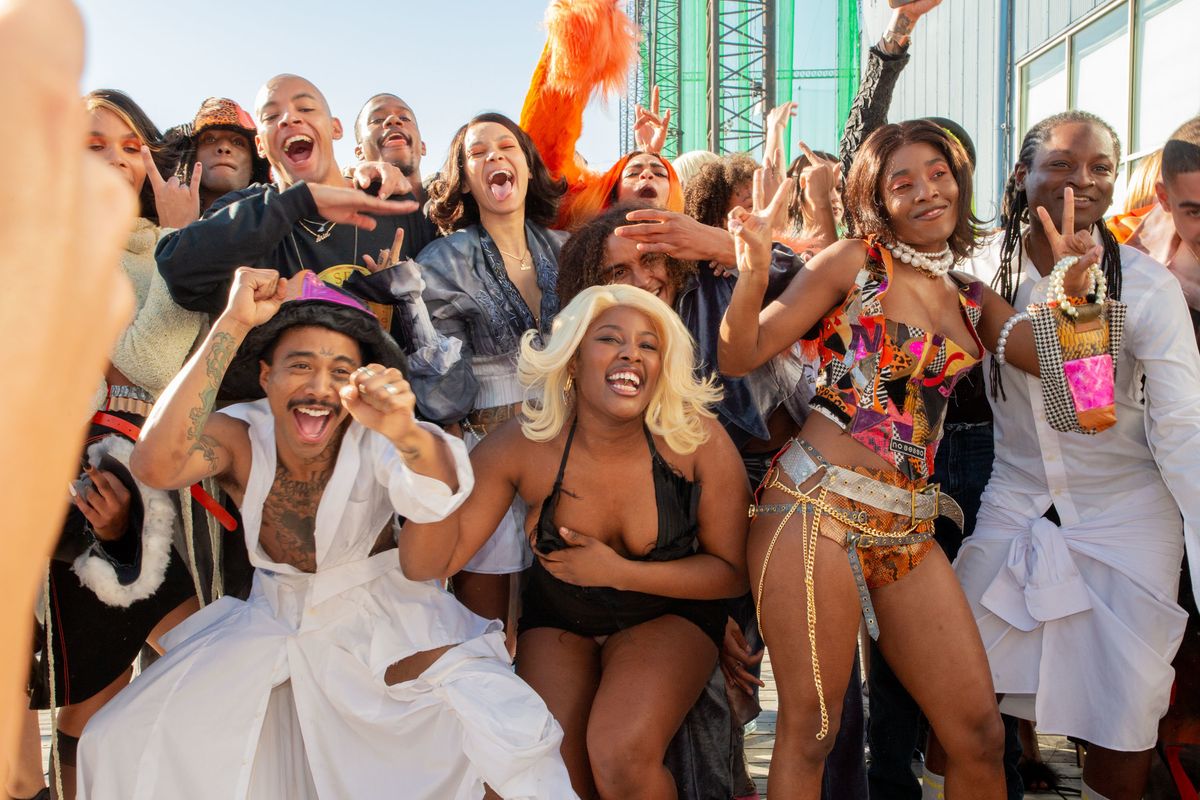 A glass ceiling in the fashion industry was broken this week when designer Pierre Davis, whose LA-based line NO SESSO debuted in New York City, became the first transgender woman to send her collection down an official NYFW runway. The fact that Davis is a woman of color adds even more weight to how important — and long-overdue — this really is.

NO SESSO, which was created in 2015 and translates in Italian to "No Sex," already has a strong following back home in California, where Davis and her radically gender-and-body-inclusive designs have won over the local queer fashion folk with blends of high-street details and downtown style.

"I've been there since NO SESSO's inception so it's an honor be a part of Pierre's journey," NO SESSO co-director Arin Hayes told PAPER. "Everything we do takes a ton of heart and consideration, and everything we make is community knit and made with love. The fact that Pierre is the first trans woman to show at NYFW is such a huge deal and I'm so proud of her. But at the same time, it is 2019, and it's kind of shameful that this is only just now happening. We were both surprised when we found out that she would be the first. I was in tears when I called her to tell her. Still, the fact that she's a Black trans woman is super important for intersectionality in fashion. Fashion really needs to pay it forward, now more than ever."

For their first collection in NYC, Davis and her team envisioned a proud business woman of the future: architectural power suits, skirts, tops, and pants in business-casual hues spliced with vibrant, trippy patterns of fiery reds and dream-like blues. The clothes were shown on the bodies of an ultra-diverse cast of models, including Steve Lacey, Boychild and Marz Lovechild.

Kelsey Lu, who's collaborated with the brand in the past, closed the show in a visually orgasmic crimson and black fur jacket over a matching/contrasting silk-printed gown, and called the collection "Iconic. Period." Performance artist and fellow runway model Uhuru described the occasion as "a beautiful Black moment during Black History Month."

PAPER spoke with Davis backstage just minutes after her show had wrapped. She was breathless, but grinning ear to ear.

First off, congratulations! Such a huge accomplishment. How does it feel to be showing during NYFW?

It feels amazing! I'm so happy, this experience has been just so, so amazing.

What's the difference between NY and LA?

Definitely the weather [Laughs]. But actually I feel like New York has more of a real presence for fashion. In LA, fashion is more like art — an art concept — but here there's more definitive fashion culture.

What were your inspirations for this season?

When we were putting this together I was thinking of a NO SESSO business glamazon. So we mixed a lot of pinstripes and suiting materials. We did a lot of deconstructed suits. A lot of hand stitching. There was a lot of hand dying silks. There's also a lot of leather, python skins. Some fur, too. It was all about having fun and creating a really cool, glam business girl.

"We're storming the castle, breaking down walls and taking over fashion."

You're also the first trans woman designer to show a collection during the official NYFW. What are your thoughts on the importance this will have for the trans and gender non-binary communities?

Absolutely. It's very important. I always ride very hard for my community, I always have. But I think it's really important, maybe even more important now, that this fashion week I'm just focused as a designer first.

Agreed. What do you think the future holds for more conventional fashion brands?

They're going to have to keep up! It's our turn. We're storming the castle, breaking down walls and taking over fashion. It's NO SESSO or die and we're having a good time!