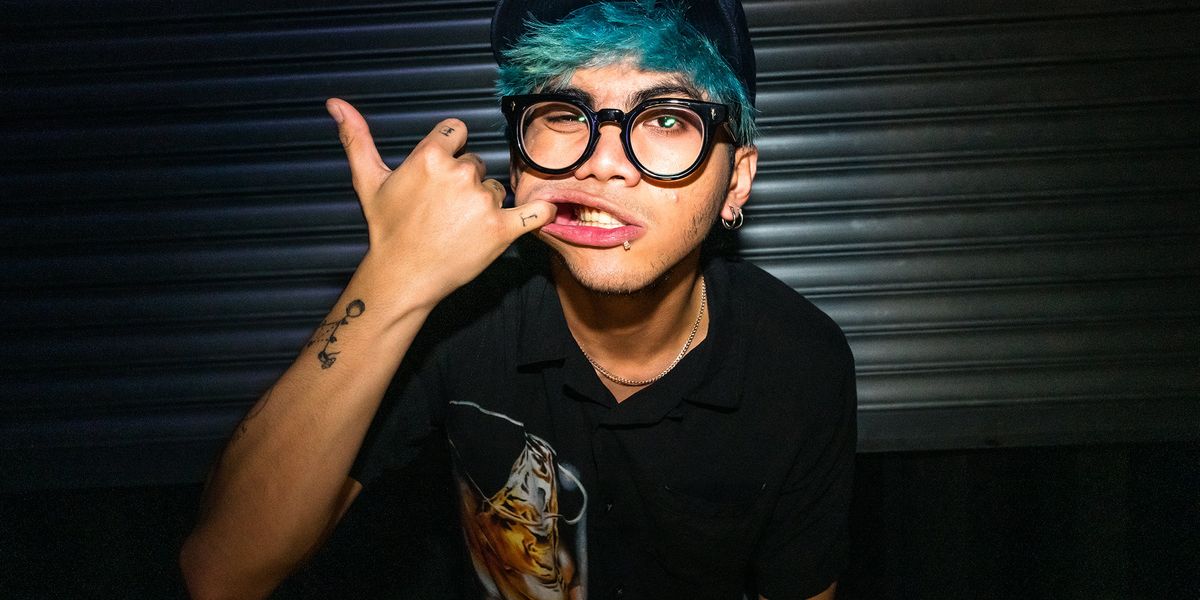 No Rome, No Rules

On his first headlining show at Rough Trade in Brooklyn, New York, No Rome commanded the stage with confidence, ease, and a swagger in his voice and the way he moved that seemed unshakable. The room was just about packed, and he knew how to work the crowd, singing both his earlier popping bops and his latest electric ballads. There were declarations of love from fans, a prom-posal, and even a welcomed stage crasher who wanted to be Rome's Matty Healy (from The 1975, who is a good friend of the artist and once called him his "muse").

No Rome, also known as Rome Gomez, was born and raised in Manila, Philippines and grew up in a musical family. His father is an instrumentalist and songwriter, his mother a former vocal coach, and both his siblings are also artists in their own right. But Rome has chosen to follow his own path apart from his family's legacy. In fact, since signing on with British independent record label Dirty Hit Records, he's stationed himself in London. Right now, though, he and his band are nomads touring with label mates The 1975. "Playing with them, in front of that amount of people, being with them and just traveling together has been great," Rome told PAPER. "Being on tour with them and seeing how hard-working they are as a band is inspiring."

And while the 24-year-old artist finds inspiration in The 1975, they too see the same in him. "Rome kind of became a bit of a muse of mine once I was working on his stuff and then his ideas were on parallel with everything that me and George [The 1975 drummer] were doing," Healy said in an interview with Beats 1 last year. "I just wanted that energy in the studio you know and he's been with us before. We've been making the record for six months together so he's just been there working away."

As demonstrated by his first headliner at Rough Trade on Thursday, May 23, 2018 — with opening act, singer-songwriter BP Valenzuela — No Rome is already growing a cult following. And if you heard the crowd rapping with him, chanting all the lyrics to his hits like "Narcissist" (which has over 6.3 million views on YouTube), and even pulling all the stops by tossing fake money during his performance of "Cashmoney," you'd easily get sucked in by No Rome's magnetic music and energy.

PAPER spoke with Rome about finding his sound, what fuels his writing, and his latest EP Crying in the Prettiest Places.

You've grown up around music because of your family. How would you say it affected the particular direction within the music world you were going to follow?

I felt the pressure of wanting to be, I guess, musically perfect. But that's what kind of made me say, "Nah, I just want to do what I want to do." I just wanted to make music I would want to listen to. Something that I would make, and not follow somebody else. Because when you come with that kind of musical background, there's a lot of rules to follow. I went to music school, like a music special college but, you know, I never finished it.

Growing up with formal training made me realize the things I wanted to do musically — writing songs, not following these kind of rules that were given to me upfront. I grew up with the rules, I'm familiar with the rules, which is why I didn't want to follow them, because that's not what I wanted to do. I learned to play the guitar, play the keyboards, and I'm just applying that to what my music is now.

What would you say influenced your sound? How did you find your own sound?

I think it was really spending time sitting down and learning my own music. I produce and write it, so there's no other better person who knows the music but me. If I've been spending a month just listening to one song, making that one song, of course, I'm going to need to hear from another perspective. That's when a couple of producers come in and help me.

But I feel like it's more like that. That's how it happens. You know it's your sound because you keep playing it every day, and then you start to realize, "Yeah, this is my art style. This is how I paint. My favorite color is this, because this is what I want to use." Writing songs constantly just ended up being this natural thing that I do now. It's a never-ending process though, being an artist keeps going, writing keeps going.

When you were talking about your songs at the concert, you mentioned a lot of them you wrote back when you were younger. What inspired your 12-year-old or 15-year-old to start writing?

It's almost kind of like a diary. That's the worst part for me, but it's also the best thing. It's storytelling. I used to love reading books of poems. All that Frank O'Hara, Robert Frost. That's what opened me to writing when I was younger. That was my basis on how to write a song. When I was a child I thought songs were written by reading poems and putting in the music background. I guess that's still how it is for some people.

Would you say having born in the Philippines influences your music in any way?

As a person it affects me. And since I reflect in my music, and it comes from a very personal place, it would show if you grew up in a certain place. It would just naturally come out. It's something that you can't hide, and you can't keep it in. I feel like growing up where I did also makes me understand a lot of things more, and gives me a different perspective. I'm not mad about it at all.

Could you talk about your latest EP, Crying In the Prettiest Places?

This EP is a lot more honest. There's more guitar-driven tracks. Lyrically as well, it's just mainly about crying on a piece of paper. I'm really proud of this one. I love it.

People already know the words to the tracks on that EP. You've amassed quite a following! Can fans expect No Rome to headline more shows? Maybe a big tour of your own?

That's the whole plan! There are no dates at the moment, but of course it's going to happen soon enough. I'm looking forward to it.

See photos from No Rome's Rough Trade NYC show in the gallery below.