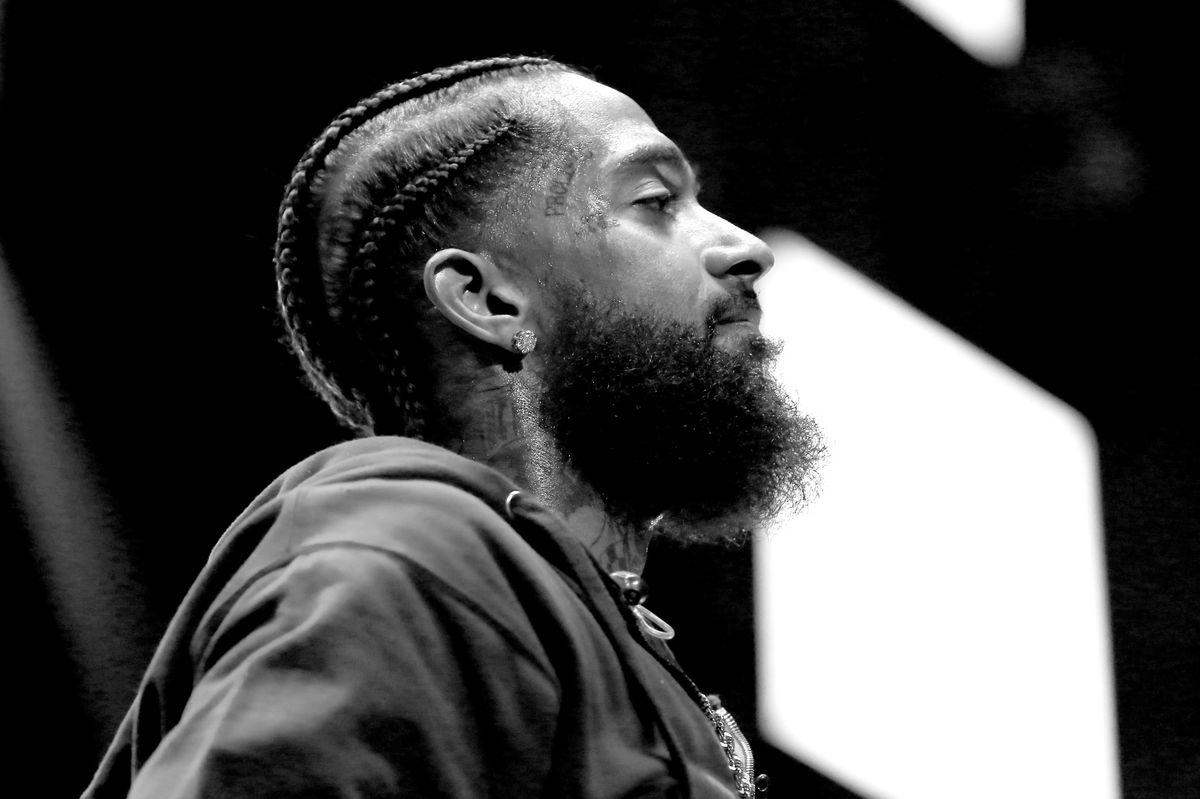 Cities around the world are mourning the death of Ermias Asghedom, more commonly known as rapper Nipsey Hussle, who was murdered this past Sunday in front of his Marathon "smart store" in Los Angeles. Vigils have popped up everywhere from Detroit to Toronto to Addis Ababa, Ethiopia, but no place is feeling the tragic loss of Hussle quite like Los Angeles, and his native South Central neighborhood in particular.

Hussle burst onto the scene with his first mixtape in 2005, but didn't start building a real fan base until 2008 when he released his single "Hussle in the House," a gritty, West Coast party track on every LA native's playlist. He quickly situated himself as a sharp new voice in the pantheon of West Coast rap, a genre known as much for its direct messaging (see: "Fuck Tha Police") as its leisurely, low-riding beats. Though Hussle could have fully leaned in to his persona as a hardcore LA Crip, there was always a whisper in his music of plans to elevate beyond that life. Thirteen mixtapes and one Grammy-nominated album (2018's Victory Lap, his only major studio release) later, it's safe to say that Hussle proved himself to be a bonafide, South Central star. But beyond that, his moves outside of music have become the stuff of hometown hero legend: he was at once a cultural ambassador, commercial property investor and financially literate entrepreneur.

As a Black kid growing up on Crenshaw — who spent time at its intersection with Slauson Avenue on countless occasions (mostly to shop at the Super Mall and eat Bill's Tacos) — the range of our people was never more evident. Pockets of houses belonging to the more affluent were surrounded by stuccoed apartments where the working class lived, but the warmth of the South Central sun hit us all the same. The soundtrack to my teenage years in the mid-2000s, which were spent turning up at backyard kickbacks all over the city, was dominated by LA rappers like YG, Ty Dolla $ign, and Dom Kennedy; at the time, they were all local celebrities early in their careers, but have since gained widespread popularity. Hussle was a part of their generation of hip-hop, but also a refreshing nod to the era of lyricists like Ice Cube and Snoop Dogg that came before him. He was a true West Coast rapper in every sense — aspirational, scrappy, laid back, and solid.

While all of Hussle's hip-hop peers were brimming with talent and ambition, arguably no one was as focused on the betterment of community as Hussle was. As a result, he carved out a unique place in the hip-hop community as someone dedicated to providing a new outlook for Black people, especially in his underserved South Central neighborhood. Hussle's Slauson Boy swagger was outsized only by his focused heart; the way he toggled in between speaking on the importance of investing in Black businesses and throwin' up his set illustrates the uncommon space he held as a Black man who "made it out of the hood" but was committed to inspiring real change by staying within it.

Related | Nipsey Hussle on Kendrick, L.A. Rap and Why Patience Pays Off

The scope of Hussle's message was broad, but his focus was narrowly on Los Angeles' Crenshaw District, an area stretching from Mid-City to South Central heavily populated by burger joints, barbershops, and a colorful mix of Black and Brown families. At the intersection of Crenshaw and Slauson, Hussle opened his Marathon Clothing store in 2017, a place that sold everything from his namesake clothing brand to prepaid smartphones. Hussle notably, and nobly, employed former felons from the neighborhood to work there, as it is notoriously difficult for those with a record to find employment upon release. It's thoughtful moves like these that illustrate Hussle's understanding of hood politics, matched only by his understanding of how larger systems — like the prison industrial complex — operate to keep Black communities from attaining success.

Part of Hussle's allure, then, was his identity as someone familiar: a man with a common journey navigating the streets of South Central LA, the omnipresent glow of that bright Crip blue like an aura around him. But the other side of him that people are mourning is his dual role in the community as the wise "big brother" with big dreams. To South Central, he was a local dedicated to laying the foundation for people in his neighborhood to have a chance at generational wealth. Truthfully, Hussle's philanthropy has complicated how people can talk about him — his actions have made it so that he can't just be described as a gangbanger-turned-rapper. Hussle's vision demands that people add community activist, entrepreneur, and inspiration behind his name too.

The rapper had also recently opened a STEM education center and co-working space called Vector 90, along with fellow South LA native and real estate developer David Gross, and had signed on as a community partner for the Destination Crenshaw project, an outdoor museum that will run along the Metro Crenshaw line celebrating Black history and culture. Hussle's most recent undertaking was producing a documentary on the herbalist and healer Dr. Sebi, a polarizing figure whose patients claimed he cured them of HIV, herpes, and cancer without pharmaceutical medicines, but with herbs and a unique alkaline, vegan diet instead.

During his 10+ years as an entertainer, Hussle had few blemishes in his career, but one came in the form of a comment that seemed to question the motives behind growing queer representation in the media. In a January 2018 Instagram caption, he played into the stigma widely held in Black and hip-hop communities that strength and masculinity vanish if a man is homosexual. The LGBTQ+ community was understandably frustrated with Hussle's comment, which suggested the media is conspiring to represent Black men in an intentionally weak light by giving queer Black men more visibility. And while this is not a defense, it's important to understand the environment of skepticism (particularly surrounding authority) that influenced a person like Hussle. That, and the media's history of portraying cis, straight Black men like himself on the other side of the spectrum: as hypermasculine, as threatening, as violent, is a reductive rendering of Black identity too. Both (incorrect) narratives split Black manhood into a binary, and ultimately dehumanize the Black experience. While Hussle's views deserve examining, they don't have to undermine his other work.

The horror of Hussle's assassination is disturbing on many levels: broad daylight, at the hands of a fellow Rollin 60s Neighborhood Crip, in front of his Marathon store, and on his own block. But perhaps what's saddest of all is that a son, a father, a committed boyfriend (the rapper had been dating actress Lauren London since 2013), a friend, and a champion of the hood with real life street cred was gunned down as a result of the "crabs in a barrel" mentality that he was working so hard to counteract. Eric Holder, his alleged murderer, was an aspiring rapper from the neighborhood himself who saw fit to end Hussle's life, a decision that has now cost the world a forward-thinking rap star, and Los Angeles a legend. Hussle's death — for those of us who grew up in the palm tree-lined streets of South Central especially — not only marks the tragic loss of a skilled rapper, but also the loss of a leader who was reinvesting his wealth into the Black community.

The metaphor that guided Hussle's artistic career was that of the marathon: a race long and steady that demands hard work, endurance and mental and spiritual grit. Whether you win the gold medal at the end or not, the journey alone is worth the effort. Asghedom was killed at his apogee, an untimely death that will ultimately cement his legacy as a martyr and make his work immortal. His album has already reemerged in the Top 10 on the Billboard charts posthumously, his planned open air architectural space will continue to be built, his Crenshaw hoodies will still be brandished by true LA natives, the 108 bus he used to ride down Slauson on remains in service. The marathon continues.